the world’s largest software company first lays off 10,000 employees and then announces billions in investments in a computer program that can imitate human-written texts in a deceptively real way. What until yesterday sounded like the plot for a new season of the satirical television series “Silicon Valley” has become reality today. Microsoft made a “multi-year investment” in the company OpenAI, which develops products like ChatGPTannounced the software company on Monday.

ChatGPT can write full texts on any topic, ranging from amazingly well-founded to completely gaga. And anyone who writes to me now that this morning briefing does nothing else will personally remove them from our mailing list.

Because: I’m still sitting here, a real person, and I can do that.

In all likelihood, Germany will make it through the current winter without an energy shortage. At the same time, we are now going through the first full year in which we have to do without Russian pipeline gas. The head of the International Energy Agency (IEA), Fatih Birol, warns the Europeans in an interview with the Handelsblattto hastily dismiss the supply crisis in view of falling gas prices: “No Russian gas, China’s comeback as an importer, little increase in supply: these three factors will make next winter a challenge.”

Against the background of the tense situation, the IEA director also criticized the German nuclear phase-out: “I wish there was the possibility of extending the service life much more if necessary.” On the other hand, Birol praised the fact that the expansion of wind power and solar systems had accelerated: “Above all, the acceleration of the planning process pays off.”

At the same time, the energy expert fears that Europeans will fall into new dependencies. 70 percent of all electric car batteries are made in China. Europe must find new suppliers and start mining critical minerals itself.

Anyway: When it comes to battery production, Europe has a good chance of reducing its import dependency in the coming years. According to a forecast by the environmental organization Transport & Environment (T&E), it is likely that lithium-ion batteries with a total capacity of 413 gigawatt hours (GWh) will be manufactured in Europe by 2027, with a further 203 GWh possible. T&E follows the announcements for battery factories in Europe. According to T&E, if all plans are actually implemented, this would cover demand even if demand for batteries is further boosted. 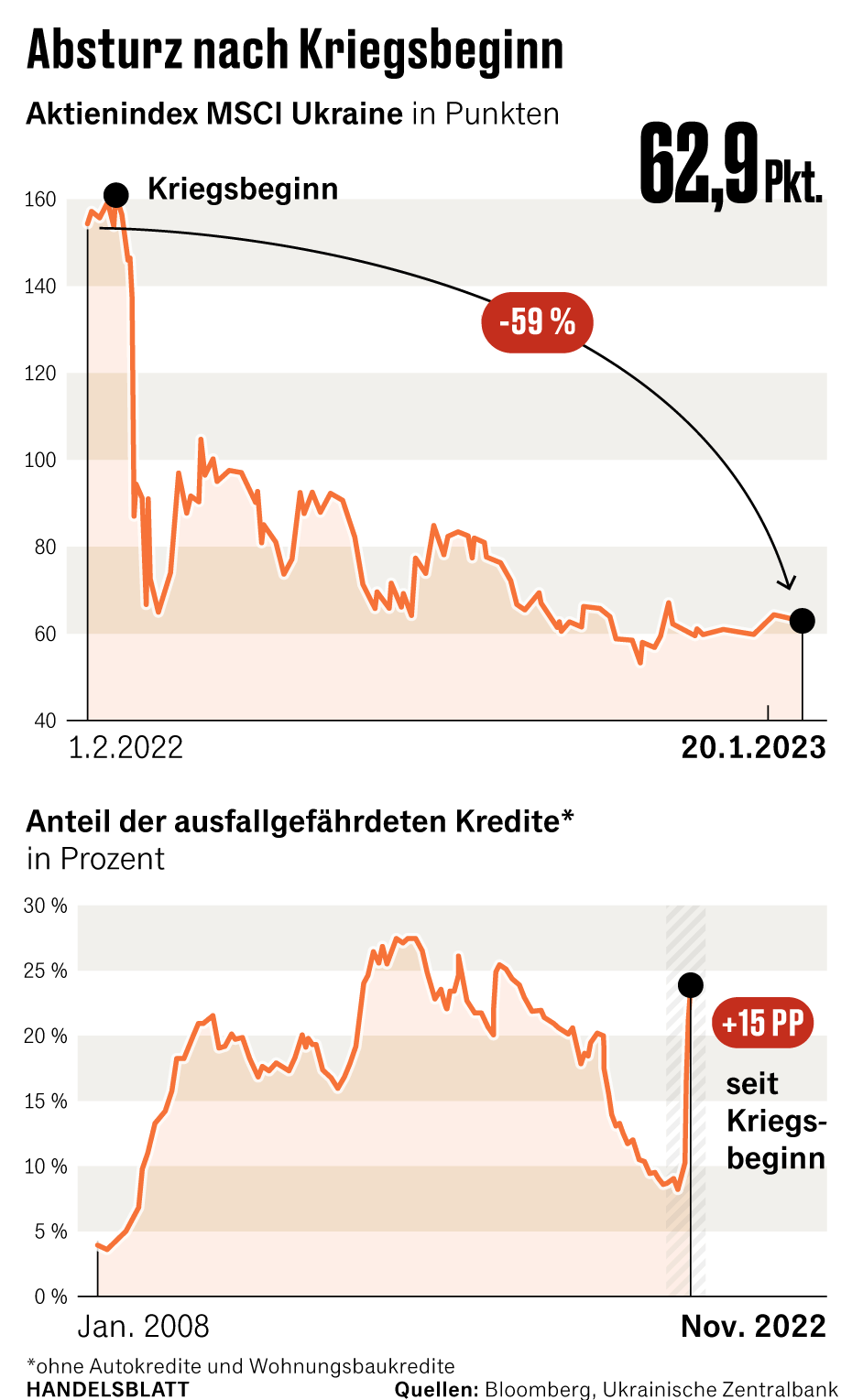 Economically, Ukraine is a shattered country. In December, annual inflation was 26.6 percent. Economic output is likely to have shrunk by around a third in 2022 as a whole. But despite bombing raids and power outages, Ukraine’s financial sector is doing relatively well.

“I still haven’t figured out exactly what the recipe for this is,” jokes Gerhard Bösch, who heads the largest Ukrainian retail bank, the private bank. The name of his bank is deceptive: the private bank has been owned by the Ukrainian state since it was nationalized in 2016.

There has never been a bank run in which savers storm the counters to withdraw money, and in some cases savings deposits have recently even increased. According to the Central Bank of Ukraine, the country’s financial institutions achieved an average return on equity of over nine percent in the first eleven months of 2022 – even though the proportion of non-performing loans has risen significantly since the outbreak of war.

Germany is experiencing a different kind of refugee wave. Unlike in 2015, there are no mass marches of migrants on the Autobahn and no major debates about a culture of welcome and border closures. And yet, according to the EU Commission, the number of asylum applications in Germany has increased by a third compared to 2021 – and is thus at the highest level since 2016.

In addition, there are a large number of people seeking protection from Ukraine. By the end of 2022, over a million people had fled to Germany from there. No serious politician questions their right of residence. And yet representatives of local authorities consider the current refugee situation to be barely manageable. Gerd Landsberg, General Manager of the Association of Towns and Municipalities, told the Handelsblatt: “Many towns and communities have long since reached the limits of their capacity when it comes to accommodating refugees and displaced persons.”

Some hotel rooms would be rented and emergency accommodation set up in gymnasiums, but also in free-standing buildings in commercial areas. “This can no longer be expanded at will,” says Landsberg. The President of the German District Association, Reinhard Sager, also sees a need for action. A “crisis meeting” with Chancellor Olaf Scholz (SPD) is overdue.

Works council at Volkswagen – that was something. And we’re not talking about the unfortunate “Gebauer-where-are-the-women-staying” days, when the corporate management favored the employee representatives with prostitutes and luxury trips. Even after that, you could make good money as a works council member at Volkswagen. Prominent example: Bernd Osterloh, who has been head of the VW works council for many years, started out as a line worker in the group. Later, as head of the works council, he received six-digit annual salaries, including bonus payments at peak times of around 750,000 euros. This was justified with a hypothetical career that Osterloh could have made in the management of the group.

But the concept of a hypothetical career is threatened with the very real end after a decision by the Federal Court of Justice. Up to a third of the approximately 250 VW works councils are facing a pay cut. The Handelsblatt learned this from circles familiar with the events. In individual cases, monthly sums of around 4000 euros are involved. An insider: “Here the hut is on fire.”

In some cases, the cuts are so great that important parts of life planning are in question – for example, if works council members have financed their own home on the basis of their previous salary.

I wish you a day that is not only planned based on a hypothetical career.

PS: I hope you appreciate that I spared you the tiresome tank debate for a day. Almost at least, because we want to know your opinion: Is Germany rightly criticized for being skeptical about Leopard deliveries to Ukraine? Or is Chancellor Olaf Scholz’s wait-and-see attitude correct? Write us your opinion in five sentences on [email protected]. We will publish selected articles with attribution on Thursday in print and online.