Frankfurt The inflation rate in the euro area continued to rise in September. Consumer prices increased by 10.0 percent compared to the same month last year. This was announced by the European statistical office Eurostat on Friday. Inflation was 9.1 percent in August.

The European Central Bank (ECB) is actually aiming for a value of two percent for the currency area. Inflation has continued to move away from this mark since mid-2021. This intensifies the pressure on the central bank to raise interest rates further.

“The increase in inflation was once again much stronger than expected,” says Commerzbank economist Christoph Weil. For a long time now, he has no longer limited himself to just energy. “In order to break inflation, the ECB must continue to raise interest rates sharply,” he demands.

After a first step in July, the ECB raised the key interest rate by 0.75 percentage points to 1.25 percent in September. This was the largest interest rate move in its history. ECB President Christine Lagarde has also signaled further increases for the coming months.

Many experts have recently adjusted their forecasts. The US investment bank Goldman Sachs assumes that the ECB will raise interest rates again by 0.75 percentage points in October and December and again by half a percentage point in February. 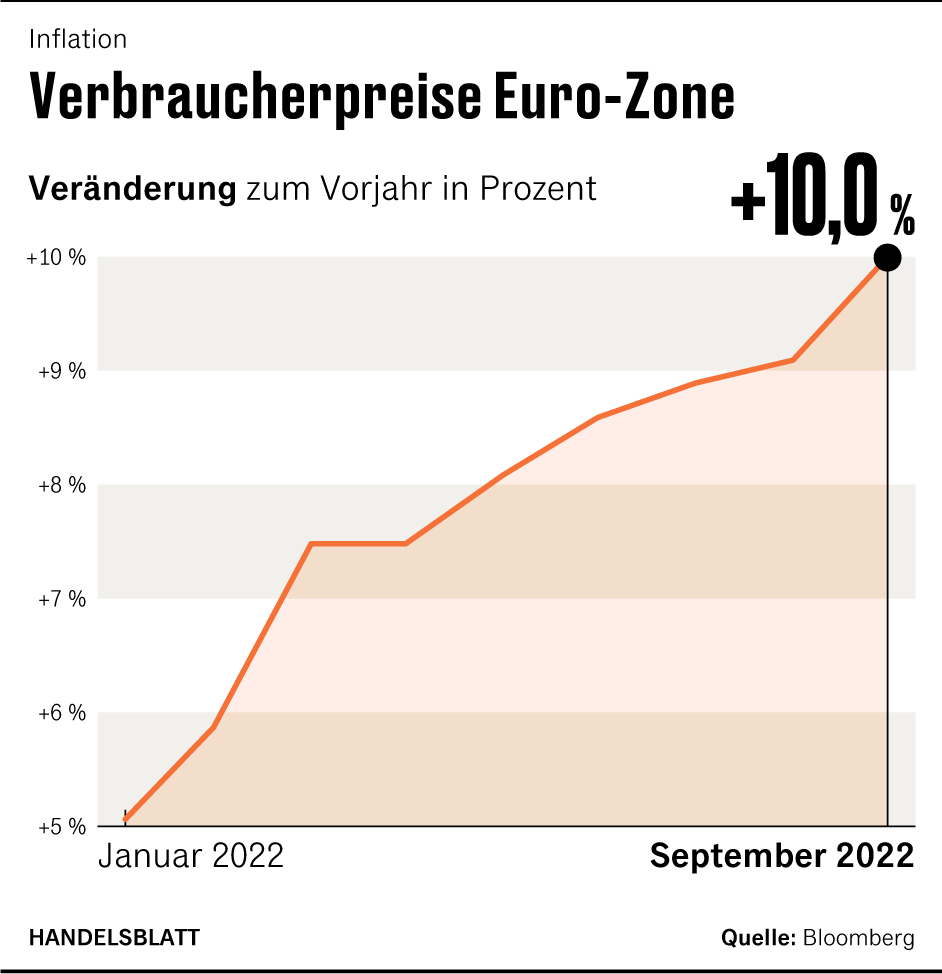 By far the biggest price driver in September was energy, which rose by 40.8 percent. In August, the increase was still 38.6 percent. Energy prices are likely to continue to drive up inflation in the coming months. As a rule, they only gradually affect inflation because, for example, electricity and gas prices for households are only adjusted over time.

>> Read here: “Don’t have a real capital markets union” – Lagarde explains the weakness of the euro

In Europe, the countries also deal with energy prices very differently. For example, France has frozen gas prices at October 2021 levels. In Germany, the government is now also planning a gas price brake.

ECB representatives have repeatedly emphasized that they can hardly influence energy prices even with higher interest rates. From their point of view, the main thing is to keep inflation expectations stable and to prevent so-called second-round effects. This refers to price increases as a reaction to previous cost increases.

In addition to energy, food prices also rose sharply. They increased by 11.8 percent. Non-energy industrial goods rose by 5.6 percent and services by 4.3 percent.

Inflation in Estonia at 24.2 percent

There are big differences in price developments within the euro zone. The inflation rate was particularly high in the three Baltic states of Estonia (24.2 percent), Latvia (22.4 percent) and Lithuania (22.5 percent) and in the Netherlands (17.1 percent). On the other hand, it was lowest in France at 6.2 percent.

A major reason for the discrepancies is the different approaches countries take to cushion the impact of high gas prices. The fact that average incomes in the three Baltic states are relatively low also plays a role. This means that people there have to spend a larger part of their income on basic needs such as energy and food, where the price increases were particularly high.

More: Inflation in Germany rises to its highest level since 1951