Berlin The Federal Chancellor has almost exceeded the time for his introductory statement, he had previously spoken for a surprisingly long time about the energy crisis, the economy and cohesion when he finally came to the topic of the day in the Bundestag on Wednesday afternoon. The federal government will deliver Leopard 2 main battle tanks to Ukraine, which he had just announced in a telephone call to Ukraine’s President Volodymyr Zelenskiy, Scholz explained.

“It’s true that we didn’t let ourselves drift,” the chancellor defended his actions after the sometimes fierce criticism of the past few days. And addressing the citizens who are worried about the new dimension of arms deliveries to Ukraine, Scholz asks: “Trust me!” Scholz addressed the citizens with unusually emotional words, and they show the historical significance Chancellor’s decision.

With the delivery of 14 Leopard 2 battle tanks from the Bundeswehr inventory, Germany and other countries will be delivering western battle tanks to Ukraine for the first time, so that the country can better defend itself against a foreseeable spring offensive in the war with Russia. The arms deliveries thus achieve a completely new quality. The West is becoming increasingly involved in the war in Ukraine.

In total, European countries want to provide Ukraine with two battalions, each with 40 Leopard main battle tanks, and as soon as possible. The training of the Ukrainian crews in Germany should also begin very soon, the federal government announced on Wednesday morning after the decision had already leaked out on Tuesday evening.

According to Defense Minister Boris Pistorius, the first Leopard main battle tanks from Germany could be in Ukraine in about three months. The SPD politician said on Wednesday after a meeting of the Bundestag’s Defense Committee in Berlin.

“No direct involvement of NATO soldiers in the Ukraine war”

This Wednesday is not only a historic day, for Scholz it is also a day of explanations. In the evening he addresses the citizens with a television appearance, in the government survey in the Bundestag he previously informed the members of the motives for his decision.

Scholz on tank delivery: “It was right that we didn’t let ourselves drift”

“Germany will always be at the forefront when it comes to supporting Ukraine,” asserted the Chancellor. “At the same time, we want to prevent the war from escalating.” It was therefore right and intentional that the government worked its way “step by step” towards this decision. “It is the only principle that guarantees security for Europe and Germany in such a dangerous matter.”

An escalation between Russia and NATO must continue to be prevented. However, there are no certainties, Scholz admits. “No one can tell you what the right and wrong decisions are.”

In recent months, there have been repeated fears that the delivery of battle tanks could be a red line for Kremlin chief Vladimir Putin, after which he will see NATO as a war party. This was a key reason why the decision dragged on longer than many members of the federal government would have liked.

However, Scholz said: “We will not send ground troops under any circumstances. I said there will be no direct involvement of NATO soldiers in the Ukraine war.” That hasn’t been the case so far and it won’t be in the future either. “Everyone can rely on that,” said Scholz.

For the Union, on the other hand, Scholz hesitated too long and thus caused “field damage” in relations with partners such as the USA, as CDU politician Jürgen Hardt accused the Chancellor. He replied: “If we followed your advice, it would be a danger to Germany’s security.” It would have been a terrible mistake to march ahead alone,” said Scholz. According to the chancellor, the citizens were afraid of exactly such a policy.

Scholz sees himself as the winner in the day-long hard struggle over the delivery of battle tanks on Wednesday. The Chancellor had always emphasized that he only wanted to supply battle tanks in conjunction with other nations. Especially without the USA, Scholz did not want to send battle tanks to Ukraine.

The Chancellor was able to achieve this goal. After initial hesitation, the USA will deliver around 30 M1-Abrams tanks to Ukraine. According to US media, the White House will officially announce this decision on Wednesday.

>> Read here: The USA move in the tank dispute

The tank package was preceded by intensive, sometimes difficult coordination. Poland in particular had increased the pressure on Scholz and officially submitted a Leopard delivery request to the federal government on Tuesday.

Germany, as the production country for the Leopard tank, must agree to any delivery from other countries. The Federal Republic thus plays a key role in the question of the delivery of heavy weapons to Ukraine. The Leopard 2 models alone have been manufactured more than 3,500 times in German weapons factories.

Ukrainian President Zelensky said he was grateful for the announced supplies of tanks from the West. However, he also said: “It’s not about five or ten or fifteen tanks. The need is greater.”

Deputy Foreign Minister of Ukraine and former Ambassador to Germany Andriy Melnyk demanded that Germany supply Tornado and Eurofighter fighter jets, warships and submarines to his country. With regard to the delivery of Leopard tanks, Melnyk told the RTL TV station: “That should only be the first step.”

>> Read here: Why it was a mistake for the chancellor to put so much pressure on the US – a comment

Recently, the Ukraine had increasingly loudly demanded Western-style main battle tanks for the fight against the Russian attackers. The front line in eastern Ukraine has hardly moved in weeks. With the battle tanks, Ukraine is now hoping to get back on the offensive and recapture more territory. 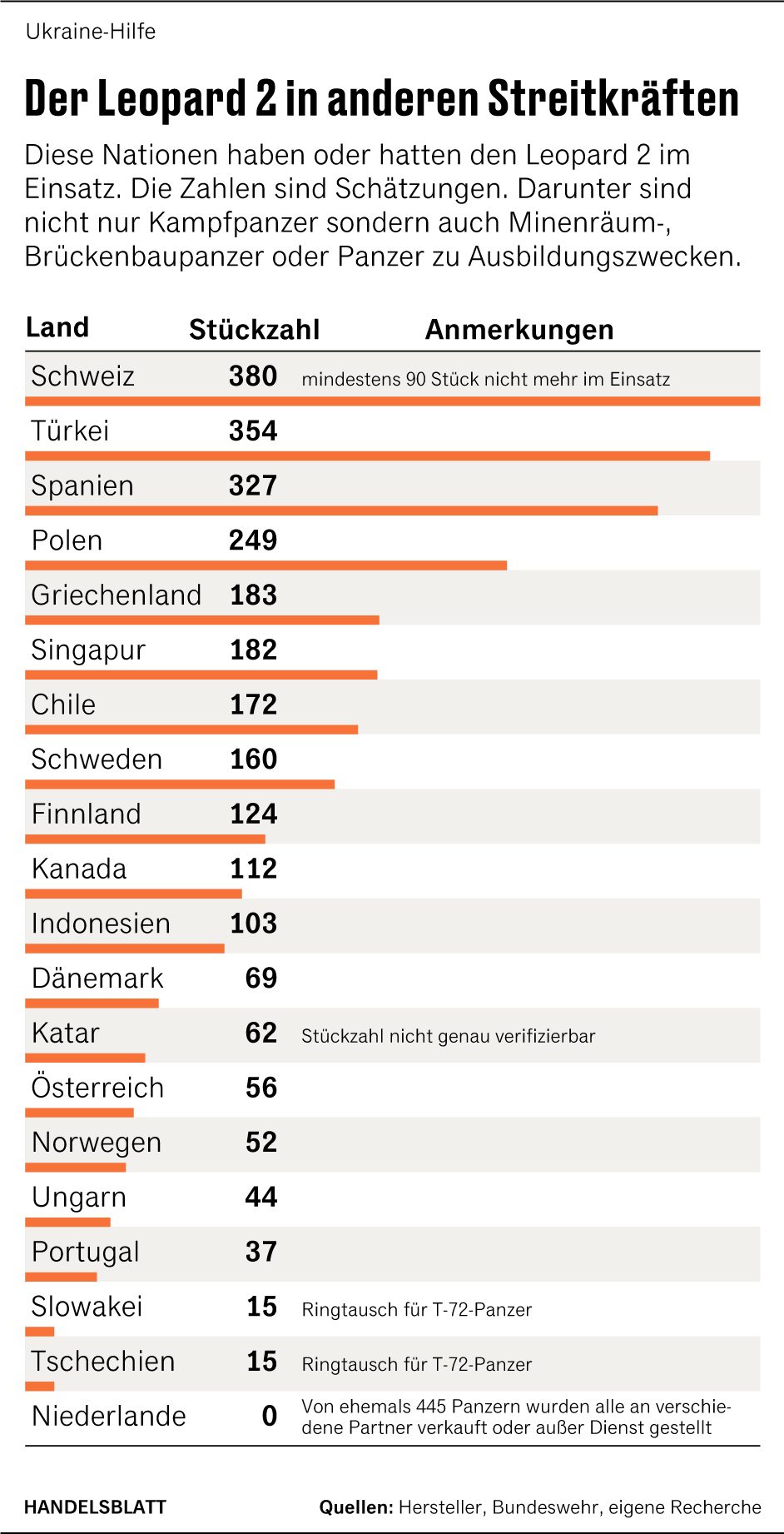 The reactions from Russia turned out to be angry, as expected. All US M1 Abrams main battle tanks and German Leopard tanks shipped to Ukraine would “burn up just like everyone else,” Kremlin spokesman Dmitry Peskov told reporters in a conference call, Russia’s Tass news service reported.

The Russian ambassador to the United States, Anatoly Antonov, also criticized the decision. A delivery of main battle tanks from the USA to Ukraine represents “another blatant provocation” of the conflict. “If the United States decides to deliver tanks, then you definitely cannot justify such a step with the “defense weapons” argument,” it says it in a statement on Telegram. It is obvious that the government in Washington is working towards a strategic defeat of Russia.

Russia’s embassy in Berlin said on the delivery of main battle tanks to Ukraine. “Berlin’s decision to deliver Leopard 2 tanks to Kyiv is extremely dangerous because it takes the conflict to a new level of confrontation,” Ambassador Sergei Nechayev said on Wednesday, according to a press release. The decision contradicts the announcements by German politicians that they do not want to be drawn into the conflict.

More: Read all current developments in the Ukraine war in the Newsblog