The production crisis in the iPhone 14 Pro continues!

Investigation into Cryptocurrency Companies for Misleading Advertisements from the USA

Munich Despite the global upheaval, Siemens achieved a record operating profit of more than ten billion euros for the first time in the past fiscal year. CEO Roland Busch said in Munich on Thursday: “The high demand for our hardware and software offerings continues, including higher than expected sales growth in the digital business.”

He is also confident for the current financial year. Since the spin-off of the low-margin energy technology, Siemens sees itself more as an IT and digital group. Investors initially reacted cautiously to the new digital strategy, and the hoped-for revaluation on the stock exchanges did not materialize at first.

But that could change now. In the run-up to the figures, the Siemens share price had risen by 30 percent in the past few weeks. On Thursday it increased again by nine percent to more than 131 euros. “Siemens is now on course,” said Vera Diehl, portfolio manager at Union Investment.

With the results, Siemens exceeded the expectations of analysts. Sales increased by a comparable eight percent to almost 72 billion euros, the operating profit by 17 percent to 10.3 billion euros. Due to a write-down on the 35 percent stake in the loss-making Siemens Energy, net profit fell by a good third to 4.4 billion euros. Nevertheless, the dividend should increase from EUR 4.00 to EUR 4.25.

The digital businesses are particularly important. Siemens no longer just manufactures hardware such as trains, but also competes with IT companies such as Microsoft and Amazon when it comes to digital solutions. Busch had announced that it wanted to increase sales of software and digital services by at least ten percent in the coming years.

In 2021/22, this was achieved with growth of 15 percent to 6.5 billion euros. The flagship division “Digital Industries”, which includes not only industrial software but also automation, increased sales by 13 percent to 19.5 billion euros.

This succeeded despite the difficult conversion to a “Software as a Service” rental model, which Siemens is currently implementing. This is common in the software industry, many major vendors have already done this. Sales should be stabilized and margins increased.

However, the change was difficult even for large software companies such as SAP. In the short term, sales will fall because the licenses are no longer sold in one fell swoop, and margins often suffer during the transition period.

Siemens boss Busch said: “The conversion of the business model is going according to plan, and our customers are taking action.” So far, 3,100 customers have opted for the new business model, “including almost 60 percent new customers”. Small and medium-sized companies in particular are interested in software based on SaaS. They often could not have afforded the expensive licenses beforehand.

>> Read here: Industrial Metaverse – “We need to reprogram the machines much faster”

Business is to be further stimulated with the new digital platform “Xcelerator”. Hardware and software modules from Siemens, but also products from other companies, are to be sold via this. Siemens does not name figures for the “Xcelerator”, but the group has at least already found a number of initial partners.

Siemens wants to compete with Rockwell in the USA

It is still unclear whether the plans will work out. Harald Smolak from the management consultancy Atreus sees good opportunities. “Busch is consistently pursuing its path of advancing the digitization of its corporate portfolio.”

In order to advance in the important US market, where Rockwell Automation is particularly strong, the group must develop strong innovations in areas such as digital twins, automation and cyber security. Rockwell was able to increase sales in the past financial year by eleven percent to 7.8 billion dollars. Similar to Siemens in the “digital industries”, the operating margin was around 20 percent for the year as a whole.

Siemens boss Busch wants to expand business with the “digital industries” despite all global tensions, but especially in China. According to information from the Handelsblatt, sales should even double there by 2025 with the help of the internal project “Marco Polo”. This had also caused skepticism among some internally. 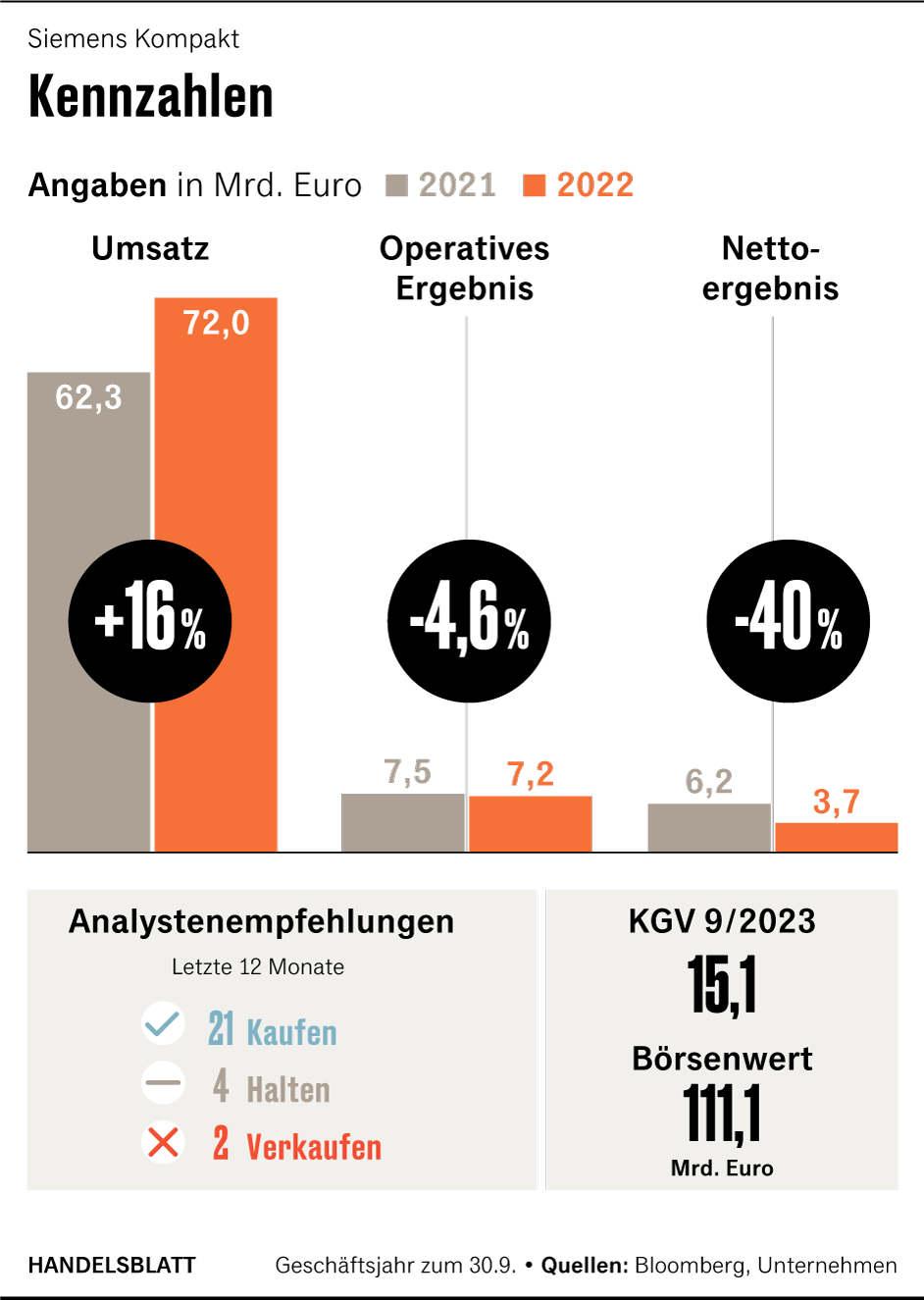 Busch now emphasized that the automation market in China offers great growth opportunities that cannot be ignored. But many new factories are also being built in the USA, for example for semiconductors or batteries. Siemens wants to participate here. “We will also do our homework in the USA.”

Even if a lot at Siemens is geared towards digital business – and its connection to hardware such as trains – the group will not be able to get rid of its past that easily. Siemens had to write off 2.8 billion euros on its 35 percent stake in Siemens Energy. This is the main reason why net profit fell by a third to 4.4 billion euros in the past financial year.

And the conversion is far from complete. The large gears and motors business up for sale will be expanded to include three more divisions, Siemens said. The integration of the subsidiary Sykatec, the low-voltage and geared motors from the Digital Industries division and Weiss Spindeltechnologie has created an independent unit with a turnover of three billion euros and around 14,000 employees. Due to the necessary integration time, the sale could now be delayed somewhat.

Despite all the global tensions, Siemens is confident about the coming months. Busch expects sales growth of a comparable six to nine percent in the current fiscal year, to which all divisions should contribute. Profits are also expected to increase noticeably.

More: How Siemens wants to massively expand its China business with the Marco Polo secret project

Ever since Sam Bankman Fried's exchange, FTX, went bankrupt, there has been a lot of fear in the crypto market....