the need for harmony was great when Chancellor Olaf Scholz and French President Emmanuel Macron met their respective ministers in Paris on Sunday. After all, the encounter took place on the 60th anniversary of the Élysée Treaty, which once laid the foundation for close Franco-German relations. After the short-term cancellation of the Council of Ministers in autumn, Berlin and Paris made a special effort on Sunday to achieve unity.

However, if yesterday’s final declaration of the meeting says that the “competitiveness and resilience” of European industry must be guaranteed through “speedy and ambitious European action” and at the same time guarantee “fair competitive conditions among the EU member states”, it can be deciphered as follows: Chancellor and President could not agree on anything concrete in industrial policy. The assistant officer was therefore asked to fetch the box of clichés from the attic of the Élysée Palace (“Look at the bottom for the folder on the Lisbon strategy, there should be something relevant on the subject of competitiveness”).

In the European reaction to the US subsidy program for green technologies (IRA), in particular, the common position did not go as far as the French would have liked, analyzes Gregor Waschinski, Paris correspondent for Handelsblatt: “The French government had previously of the meeting came up with very far-reaching ideas, including new European funding to support European industry. However, this point met with resistance, particularly in the FDP-led Federal Ministry of Finance.” There, new joint debts in the EU were feared.

What was agreed: Existing state aid for companies should be granted “simplified and accelerated” in the future. In addition, the European Investment Bank is to “provide higher risk financing for entrepreneurship and innovation”. EU Council President Charles Michel made a similar statement. 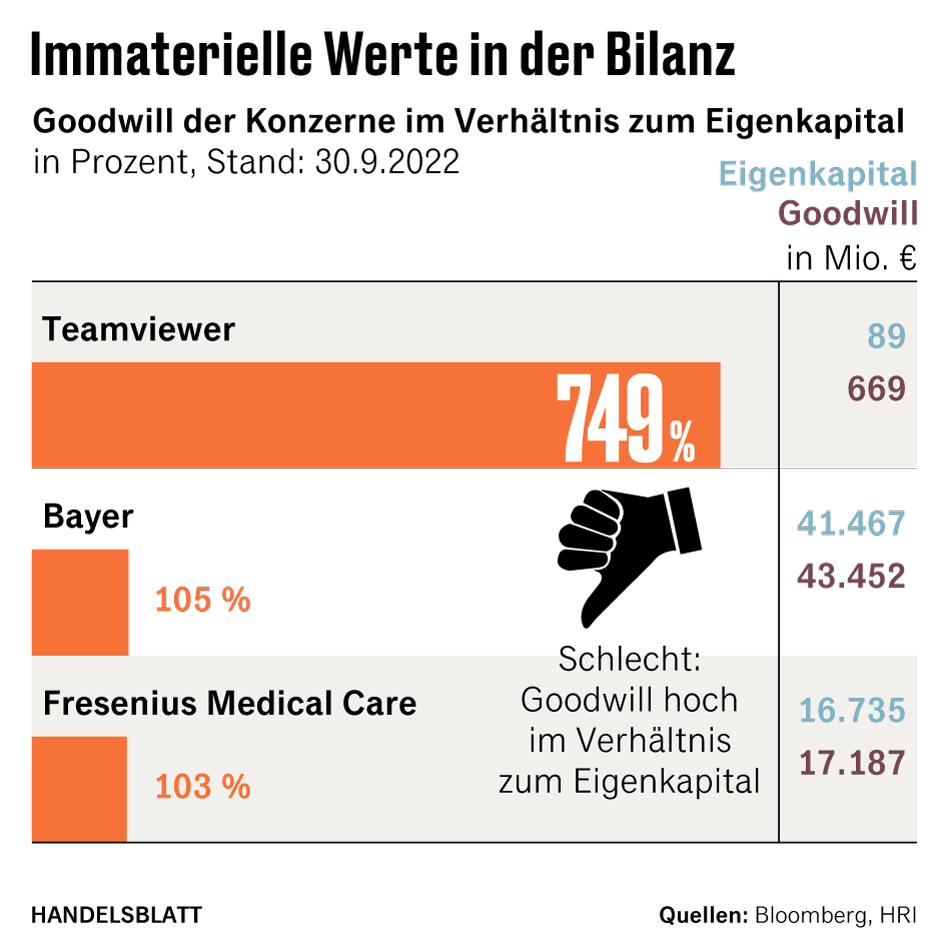 Air bookings of unclear value are not only found in politics. With 352 billion euros from overpriced acquisitions, the 40 Dax companies are currently straining their balance sheets more than ever. According to calculations by the Handelsblatt, that is ten percent more than a year earlier and a good twice as much as in 2005.

The sum is about goodwill, the so-called goodwill from acquisitions, for which there is no material equivalent. Nevertheless, these values ​​are assets on the balance sheet, according to the motto: We paid so much for this acquisition, so it must also be worth that much.

Eight companies in the Dax, MDax and SDax have even accumulated more goodwill than equity, including the Dax companies Bayer and Fresenius Medical Care. At the IT company Teamviewer, the goodwill is even five times higher than the equity.

“Investors are well advised to look at the amount of goodwill in relation to equity,” says Christof Schürmann, analyst at Flossbach from Storch Research Institute, because: “Against the background of higher interest rates and poorer prospects, one should expect significantly higher depreciation.”

In the tank debate, the weekend was dominated by the outrage fallout. On Friday, at a meeting of Ukraine-supporting states in Ramstein, the German government stood by its refusal to send German Leopard main battle tanks to Ukraine or to allow other states to export these tanks. The disappointment and outrage in Poland, the Baltic States and of course the Ukraine itself was foreseeable. Neither Chancellor Scholz nor Defense Minister Boris Pistorius should have hoped for Fleurop flower greetings from Warsaw or Kyiv at the weekend.

Apparently, the extent of the outrage in the US government was not priced in. According to information from the “Süddeutsche Zeitung” (SZ), particular irritation was caused by the fact that the federal government had set conditions for the Leopard delivery before the Ramstein meeting: Leopards for Ukraine should only be available if the USA also delivered their Abrams main battle tanks .

Meanwhile, several US congressmen are campaigning for actually supplying some American tanks to Ukraine in order to force Germany to act.

The dispute with Washington is exactly the opposite of what Olaf Scholz wanted to achieve. He had repeatedly emphasized how important it was to stand shoulder to shoulder with the USA in the Ukraine war – also with the ulterior motive that Russia would under no circumstances dare to enter into a direct military conflict with the USA. And again and again it was said in Berlin that the United States really appreciates what Germany is doing to support Ukraine.

Germany must now make a special write-off on this political goodwill.

Federal Foreign Minister Annalena Baerbock made it clear how deep the tank conflict runs even within the traffic lights. She stated that Germany would not block the export of Leopard tanks from third countries to Ukraine. “At the moment the question has not yet been asked, but if we were asked, we would not stand in the way,” said the Green politician to the TV station LCI. The official Berlin government line looks different.

Finally, a personal note: US President Joe Biden appears to be about to appoint a new chief of staff. US media reports that former coronavirus coordinator Jeff Zients is set to take over the post that many US policy insiders believe is the second most powerful after that of president. The New York Times reports that former chief of staff Ron Klain apparently wants to give up his post at the beginning of February. His successor, Zients, would play a key role in preparing Biden for re-election. Biden is expected to announce in February that he will run again as a presidential candidate in 2024.

I wish you a good start to the week and no need for depreciation.

Amazon has announced that it will send aid to Turkey after the Kahramanmaraş earthquake. The first aid fleet that will...