Macron between Scholz & Sanchez in a two-front battle

Big Day for 20 Altcoins: Here’s What to Expect

You Will See Bitcoin and ETH at These Bottoms!

Weekly Chart and Levels for BTC, DOGE, ETH and XRP! -43

Which heating costs consumers still have to reckon with in 2022

Nemrut Mountain, which is located within the borders of Kahta District of Adıyaman and Büyüköz Village of Pütürge, is one of the touristic places that many people wonder with its history and architectural beauties.

Kingdom of Commagene The architecture in the region, which bears its traces, was built by King Antiochos I as a sign of gratitude to his ancestors and gods. There are many rumors as to why the giant monumental statues, tomb and tumulus, which are at the top of Mount Nemrut at 2150 meters and attributed to the gods, may have been built. Here is the historical background of the region that fascinates with its scenery…

The archaeological structures on Mount Nemrut belong to the Hellenistic period. When you visit the area, you can see the huge statues. East and West You can see that it was built on two terraces. There are sculptures, reliefs and a courtyard on the east and west terraces. There is also an altar on the east terrace, with the only difference. Dimensions of these statues 8-10 meters between height. So, what do you think could be the reason why Antiochos had this giant architecture built on the summit of Mount Nemrut? Let’s look at the real story together.

Mount Nemrut was not a settlement, it was a sacred site built by King Antiochos I.

When you come to visit the region, you can’t put a name on the mountain. emotional intensity Don’t be surprised if you feel it. Because we see that many people who visit the region have similar feelings, expressed in various studies. Antiochos was the son of Mithradates I, and the Kingdom of Komagene gained importance during the reign of Antiochos (62-32 BC). 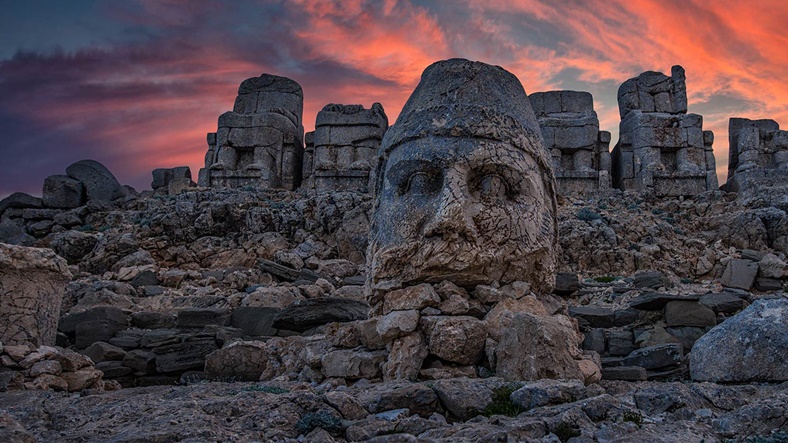 Mount Nemrut also contains a structure and tumulus that is thought to have been built as a tomb for Antiochos himself. Region a sacred space It is considered to be a temple because it is thought to have built structures that represent the veneration of the spirit of a dead king. Perhaps this is why those who visit the region feel intense emotion.

Although it is said in the inscriptions in the region that the tomb of the king is there, it has been preserved until today. The grave has still not been found. The tumulus is located close to the plains and gorges of the Euphrates. It is even believed that the king’s bones or ashes were placed in a chamber carved into the bedrock inside the tumulus.

Therefore, this 50 meters high and 150 meters diameter your tumulus with small pieces of rock It is said to be covered and protected. If you want to dig the tumulus and go into it, you cannot do it because the small rocks that protect the tumulus collapse down. In any case, no other similar tumulus has been found in the world, which was made of this crushed stone.

Mount Nemrut is actually a bridge between Eastern and Western civilizations. 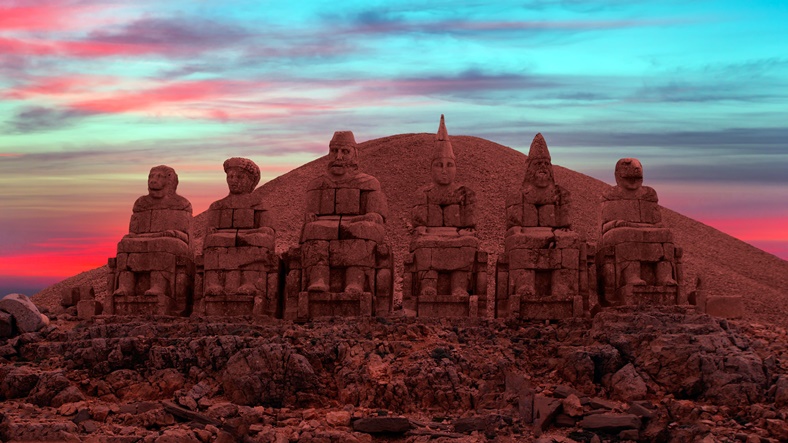 The sculptures on the east and west terraces were created by blending the Hellenistic period, Persian art and the art understanding unique to the Commagene country. For example, there are statues of lions and eagles on both terraces, as well as statues of gods and goddesses. Even on the west terrace a horoscope with a lion there is even.

The first statue from the left is Antiochos I, the second is the Commagene goddess Fortuna-Tyce, Zeus (Oromastes), Apollo (Mithras) and Heracles (Artagnes). It is very significant that the statues are placed in East and West directions facing the horizon. When we look at it, it is understood that this situation is like seeing the sunrise and sunset from the eyes of the gods. In this respect, Mount Nemrut is a bridge between East and West. to buffer duty We could say he had it.

It was exactly 2000 years before the historical texture of Mount Nemrut was discovered after the Commagene Kingdom collapsed. 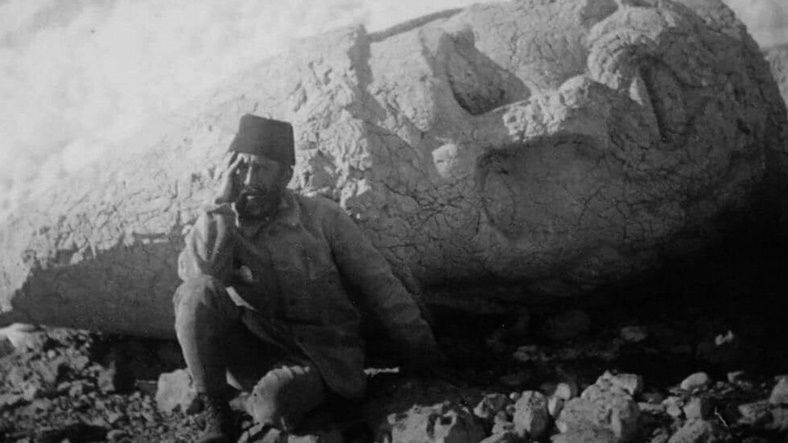 The independence of the Kingdom of Komagene, which lost the war against Rome in 72 AD, came to an end. With the descent of the kingdom from the stage of history, the artifacts on Mount Nemrut remained undiscovered for nearly 2000 years. Finally, the German engineer Karl Sester, who was assigned to visit the region in 1881, came across the sculptures on Mount Nemrut and sent to the German Consulate in Izmir, where he did not see the Greek inscriptions on the back of the sculptures. Assyrian Ruins it says it found it. In other words, it is understood later that the region was the Kingdom of Commagene due to the mistake made by Sester.

Of course, Sester wasn’t the only one working in the area. Osman Hamdi Bey, the director of the Imperial Museum (Museum-i Hümayun), came with his team in 1883 and examined the area. It is known that archaeologists Theresa Goell and Karl Doerner worked in the region after World War II. As the ruins of Mount Nemrut, Included in the UNESCO World Heritage List in 1987 known to have entered.

The lion horoscope statue indicates that the region was interested in astronomy. 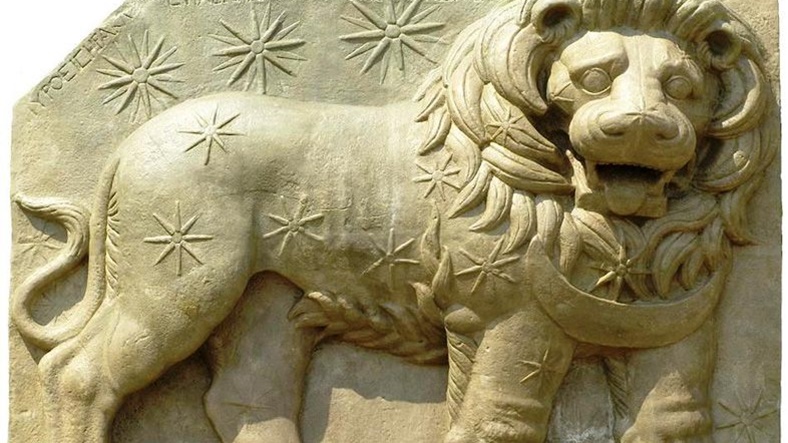 The story of the emergence of the lion horoscope begins after the first excavation in the area in 1881. Because this statue cannot be found because it was under the pebbles that had slipped over the tumulus. The lion horoscope was unearthed during the excavation commissioned by Osman Hamdi Bey. greek horoscope gets the definition. 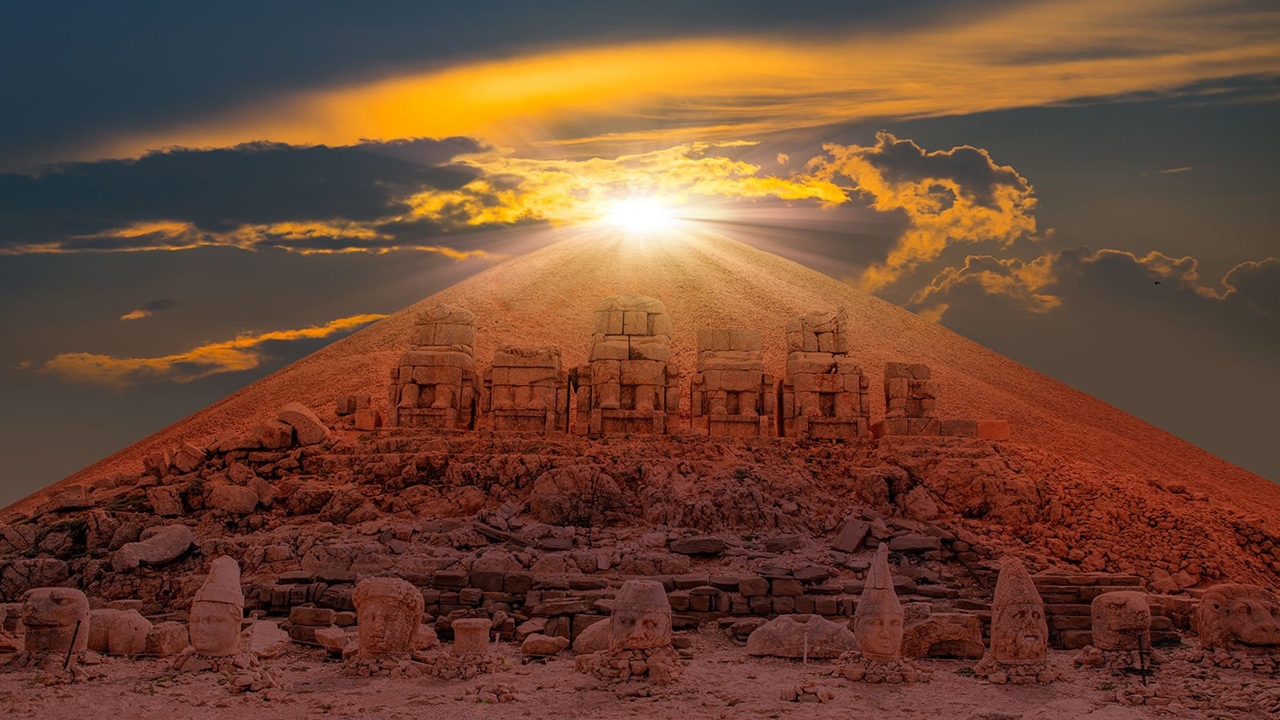 The lion’s body and circumference are surrounded by a total of 19 stars, and there is a crescent on its neck. Greek on the three larger stars on the lion’s back Mars, Mercury and Jupiter he is writing. Researchers say that there is a date on the Lion horoscope and that this date may be the date the tumulus was built. The lion horoscope was moved to the temporary restoration house in the north of Mount Nemrut in 2003 and was closed to visitors. It should not be surprising that many visitors from Turkey and abroad want to explore this place every year, because the historical richness of Mount Nemrut is dazzling. Moreover, the fact that the sun rises the most and the sunset is the most beautiful proves that it is a place worth visiting.