Dusseldorf The leading German index is well protected against falling prices in the coming trading days. And the potential for stock market surprises is on the upside.

This can be seen from the current Handelsblatt survey Dax sentiment and other indicators. “If, contrary to expectations, there is no longer a setback, many investors will follow the courses,” sums up sentiment expert Stephan Heibel. This is a good sign for the overall market.

In the past week, domestic investors have ramped up their cash holdings. They have reduced their portfolio holdings, taken profits or thrown out positions that had been in the red all year at a tolerable loss. At least the indicator of the analysis company AnimusX shows a sharp decline in the investment ratio.

These investors are now waiting for an opportunity to enter. But if the stocks they wanted to buy continue to climb higher, those investors will eventually invest for fear of missing out on further gains — adding further upward pressure.

Such entry opportunities could arise when individual stocks sell off while others rise. Over the past week, stocks in some utilities as well as some resource companies have fallen for the most part. “Anyone who is still afraid of a recession can now take action there,” says Heibel. These titles are considered to be comparatively independent of economic influences.

Negative reports can change this starting position at any time. “But currently a very negative message is needed to let the Dax collapse,” says Heibel. In his opinion, the leading index is currently well secured on the underside. Because the domestic investors are just waiting for an entry. On the other hand, moderately positive reports are enough for prices to continue to rise. 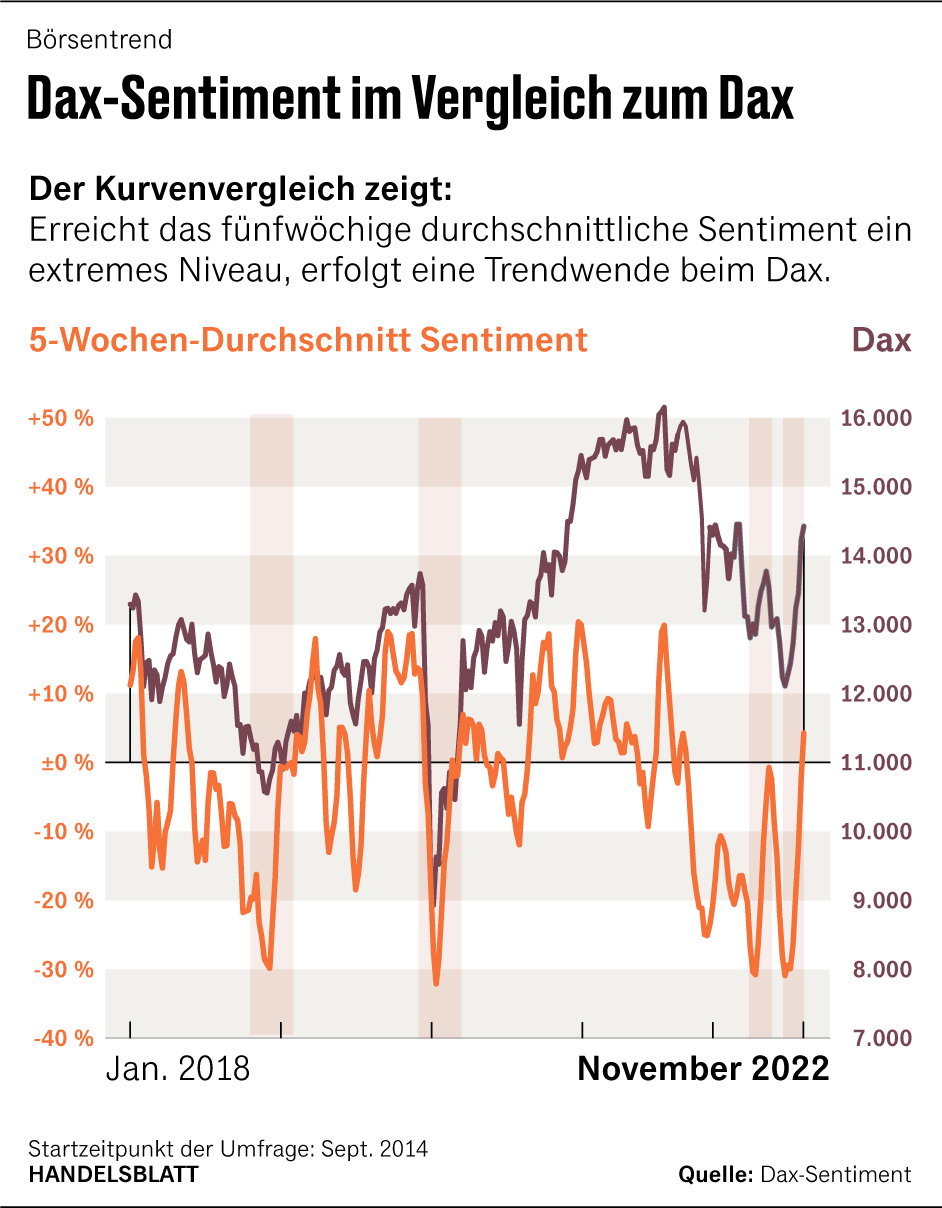 In the past trading week, which ended with a 1.4 percent increase in the Dax, domestic investors had taken a break. Heibel had forecast such a development in view of the investment situation and explained that upward impulses should only be triggered by foreign investors.

Apparently, investors from abroad have bought in. This can be seen, among other things, from the euro exchange rate, which has risen significantly in the meantime, and also from the selection of shares that have climbed in the past week. International companies are often the focus of international investors. No wonder that the stocks from Siemens, MTU Aero and Infineon were the top favorites with gains of between eight and ten percent.

The optimal scenario for the coming trading days is: Domestic and international investors buy the Dax upwards in tandem.

After an annual high of 4.7 points in the previous week, investor sentiment fell to 2.7 points. Despite rising prices, the mood has gotten worse. Many investors seem to be wondering if they sold too soon.

Uncertainty has prevailed among investors since the second week of this year. But that’s over now. With a current plus of 0.3 points, there is still no sign of self-satisfaction worth mentioning, but the positive value for the first time is noteworthy.

For the coming months, investors are divided as to how things could continue. The future expectation for the Dax in three months of minus 0.5 points shows a balance between bulls and bears.

After the investment ratio fell last week, i.e. shares were sold, the first doubts arise as to whether this was too early. Because the willingness to invest has jumped to plus 2.2 points (from 1.6). A signal that many investors are now waiting for an opportunity to reinvest their fresh cash reserves.

The Euwax sentiment of the Stuttgart Stock Exchange, where private investors trade, has fallen to minus 15. Negative values ​​indicate a surplus of put products on the Dax in the depots, which investors use to bet on falling prices or to hedge against price losses.

The last time hedging was in such high demand was in August. After the summer recovery, the Dax sold off from 13,800 to 12,100 points, a drop of twelve percent. Before that, in April 2021, there was a comparable negative value in the Euwax sentiment. At that time, the Dax had jumped over 15,200 points and then ran sideways until November, before the bear market began, which determined 2022 as a whole.

Such extreme values ​​are an indicator that prices could no longer climb so easily. But the timing for a sell-off cannot be deduced.

The put-call ratio of the Frankfurt derivatives exchange Eurex, which institutional investors use to hedge themselves, has risen to 2.0 and also indicates strong hedging purchases.

The Chicago futures exchange’s put-call ratio, on the other hand, is declining, signaling increasing risk appetite among US investors. This is also reflected in the investment ratio of US fund investors, which rose to 65 percent, the highest level since August.

The bull-bear rate of US private investors has risen to seven percent. 40 percent are bears, one in three is bullish, i.e. expects rising prices.

What is striking is the low proportion of neutral investors at 26 percent. A clear majority has a firm opinion on share prices. Such high polarization has often prompted violent movement in one direction or another in the past. The “fear and greed indicator” of the US markets, calculated using technical market data, shows moderate greed with a value of 62 percent.

There are two assumptions behind surveys such as the Dax sentiment with more than 7,500 participants: if many investors are optimistic, they have already invested. Then only a few are left who could still buy and thus drive prices up.

Conversely, if investors are pessimistic, the majority of them have not invested. Then only a few can sell and thus depress the courses.

The waters have not calmed down for Twitter since Elon Musk bought it. This time, the famous businessman threatened to...