Dusseldorf The first rally phase is over, now it is getting harder for investors to make money. That’s what sentiment expert Stephan Heibel says after evaluating the Dax-Sentiment survey of the Handelsblatt and other indicators.

In the past four weeks, the Dax has risen by more than 1000 points. However, in order to achieve further price gains from this higher level, the framework conditions must improve significantly, according to Heibel: Inflation must fall, fears of recession must disappear.

Supply chains must improve, and consumer reluctance to buy must not become chronic. So far it was enough that there was no more negative news, now positive ones have to come.

This rally coincided with a plunge in the five-week moving average of sentiment. This had slipped to minus 31 and was approaching the historical extreme value of minus 32 in the Corona crash. “In the past, this indicator in particular was a reliable signal for a stable soil,” said Heibel four weeks ago.

Accordingly, this counter-indicator has again shown the formation of a bottom – no more and no less. “Unfortunately, the current sentiment situation does not provide any information as to whether the bear market of the past few months can finally be shelved,” says Heibel.

As difficult as it may have been four weeks ago to stay invested or even start new investments, the prices have jumped since then. The development was accompanied by a large number of positive quarterly figures. A number of companies were able to allay the fears of the past few months with their positive figures. Accordingly, the share prices of these companies are now significantly higher. 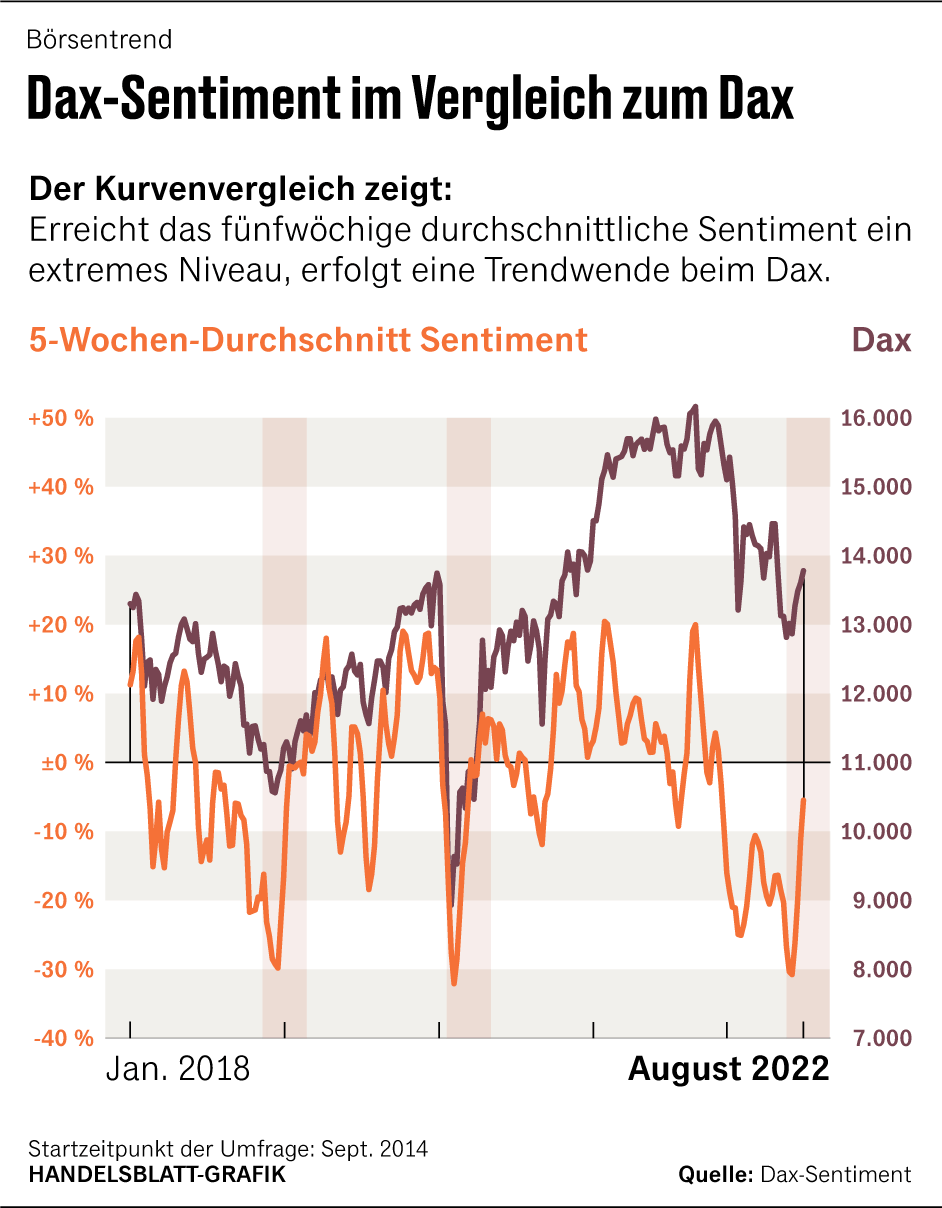 The different moods in the USA and in Germany are striking. While skepticism prevails in this country, investors in the USA have already banished the various crises into the history books. The mood on the other side of the Atlantic is much more constructive.

No wonder: there is no sign of an energy shortage in the USA. Trade with Russia is limited. However, the US-China conflict over Taiwan has not yet received the attention it deserves.

Germany, on the other hand, is gearing up for a severe winter because solutions to the energy shortage do not appear to be feasible in the short term. The Dow Jones is currently rising faster than the leading German index. In the opinion of the sentiment expert, the Dow Jones should give less ground than the Dax in the foreseeable breather.

Hardly any sellers in gold

Gold prices jumped 1.2 percent last week. A week ago, Heibel highlighted the extremely negative sentiment on the gold market. Similar to the stock market four weeks ago, it is currently enough on the gold market if there are no more negative reports for the price of the yellow precious metal to rise.

Anyone who wanted to sell based on the current news situation has done so long ago. There are currently no new sellers, so the price of gold is starting to climb. “Anyone who wants to increase their gold exposure should take advantage of the current price level before it’s too late,” says the sentiment expert.

With the fourth Dax weekly plus in a row, investors have every reason to finally put the bad mood of the past few months to rest. But price increases alone do not make you happy, and the geopolitical situation remains tense.

A rally that started only because there was no worse news is likely to continue to generate skepticism among investors. However, investor sentiment has risen for the fifth consecutive month. With 2.0 the value of 1.1 from the previous week was skipped.

At least the uncertainty has been overcome for the first time this year. With a value of minus 0.1 one cannot speak of complacency, but the positive stock market development of the past few weeks has had a positive effect on the self-esteem of investors.

The bulls among investors are slowly coming out of hiding. With a value of 0.0, the future expectation shows a balance between bulls and bears. There are still plenty of pessimists, but the self-confidence of the optimists increases with every positive quarterly result.

Those who wanted to benefit from the rally have already bought. At this point, this also shows the willingness to invest, which has fallen to plus 0.8 after the price gains of the past few days. In the previous week, this value was plus 1.5.

The last time there was such a strong negative value was in spring 2021. At that time, the vaccination campaign was in full swing and it was uncertain whether enough people would be vaccinated or whether it would be successful at all. In the spring of 2021, this was followed by a long sideways movement in the Dax. This observation suggests that most of the recovery rally is already over.

The put/call ratio on the Frankfurt futures exchange Eurex has meanwhile jumped to 3.1 percent and shows that institutional investors are taking a similar path to private investors. The pros have also increased their purchases of put protection.

The put/call ratio of the Chicago derivatives exchange CBOE, on the other hand, continues to decline. There is not much to see of the cautious attitude of German investors in the USA. This is not the case with US fund investors, who have raised their investment quota to 72 percent.

The extremely low investment quotas of the past few months are history, and the shock of the Ukraine war has lost its impact, at least in the USA.

The bull/bear ratio for US retail investors has risen to minus 4.5 percent. After a lengthy phase of pessimism, the bear surplus is also receding for this group of investors. The optimistic bulls are growing.

The “fear and greed indicator” of the US markets, calculated using technical market data, stands at 54 percent and indicates a neutral condition of the US stock market. Short-term technical indicators continue to point to a clearly overbought state of the market. A breather or slight consolidation is to be expected, at least in the short term.

There are two assumptions behind surveys such as the Dax sentiment with more than 7,000 participants: If many investors are optimistic, they have already invested. Then only a few are left who could still buy and thus drive prices up. Conversely, if investors are pessimistic, the majority of them have not invested. Then only a few can sell and thus depress the courses.

Do you want to take part in the survey? Then let yourself be automatically informed about the start of the sentiment survey and register for the Dax sentiment newsletter. The survey starts every Friday morning and ends on Sunday afternoon.

More: Investors make these ten mistakes from the point of view of stock market psychologists.

The new EU sanctions against Russia are in force. The corresponding legal text was published on Thursday in the Official...