Berlin Innovation spending is a bet on the future. For many companies, however, what this will look like seems more uncertain than it has been for a long time. This is the result of a study commissioned by the Federal Ministry of Education and Research (BMBF), which is available to the Handelsblatt.

The survey by the Leibniz Center for European Economic Research (ZEW), the Fraunhofer Institute and the Institute for Applied Social Sciences in Bonn initially paints a positive picture. The most recent data is for 2021. Accordingly, after the pandemic year 2020, innovation spending rose again significantly by 4.7 percent to 178.6 billion euros. However, the level from 2019 was only just exceeded.

Research Minister Bettina Stark-Watzinger therefore says: “It is good news that companies have caught up a lot in terms of innovation spending in the second year of the pandemic and have even invested more in innovations than in the year before the pandemic”.

However, there was hardly any time for a real recovery from the economic consequences of the pandemic. Because the German economy has to deal with several serious crises in a short time, which were hardly foreseeable. Corona was followed by the Russian war of aggression in Ukraine and the associated energy crisis. Many companies are extremely unsettled.

So far there are only forecasts for 2022 and 2023, but these look bleak. For 2022, companies only expected a very slight increase in spending of 1.1 percent when they were asked about their investment intentions in the previous year. Adjusted for inflation, they therefore expected a decline in innovative strength. For this year, the economy is even planning to spend less overall. Compared to expectations for 2022, they are expected to fall by 0.3 percent. Due to the uncertain situation, however, these forecasts only apply as “rough guide values”.

A new kind of crisis

Christian Rammer, project leader in the ZEW research department Innovation Economics and co-author of the study, said: “This is a situation that we have never had since the surveys began 30 years ago.” 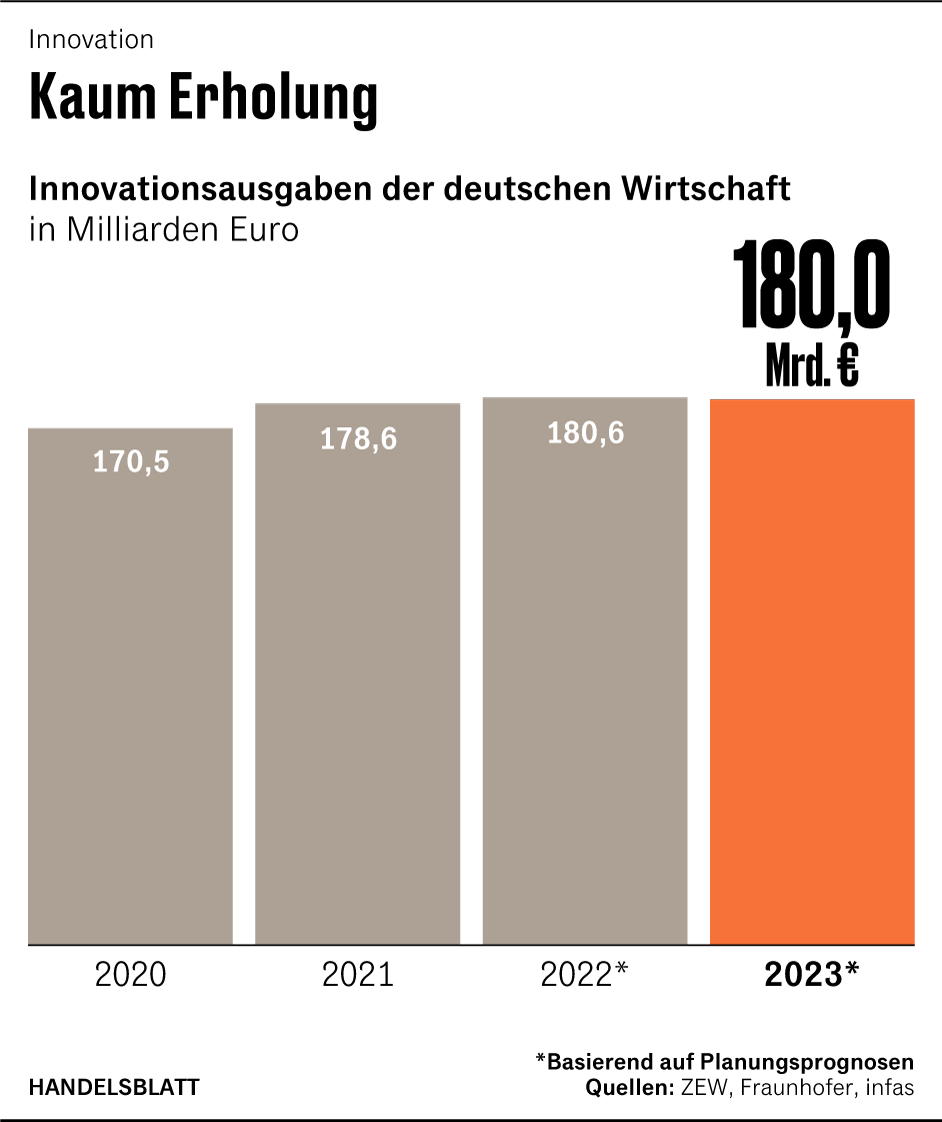 Due to the uncertain prospects, many of those surveyed did not want to give any estimates of how much their company would like to invest in innovations in the future. Since 1993, the ZEW has been surveying the innovation expenditure of the German economy. Around 16,000 companies took part in the survey this year.

>> Read here: The secret star of the German biotech industry is on the way to a billion in sales

The clear effects of the crisis are difficult to calculate. “It makes no sense for companies to include a sudden tripling of energy prices in possible scenarios, as some have experienced,” says Rammer.

There are also aspects that give courage. The number of companies that continuously conduct research and development themselves and thereby produce innovations has risen by almost eight percent to 42,000. The highest value since the start of the innovation survey.

The chemical and pharmaceutical industry, the electrical industry and mechanical engineering lead the sectors with the highest research and development activity. In the advertising industry, but also in wholesale, there are significantly fewer companies that do their own research.

At the same time, the proportion of process innovations, which are primarily intended to reduce costs, increased. They are more popular than disruptive innovations whose financial success is not immediately foreseeable.

Companies should not scale back their innovative activities too far. As a result, the necessary skilled workers could change or emigrate. Then, in the long run, it might be difficult to get the research and development department up and running again quickly.

More: These seven technologies could transform 2023