Consumer sentiment is better than it has been since April 2020

Even before the donor conference for Afghanistan taking place this Monday in Geneva, Development Minister Gerd Müller called for a fundamental reform of emergency and development aid under the premise: “It is important to invest preventively.”

What he means by that is shown by a new study by the World Bank on the expected number of refugees fleeing the climate catastrophe. According to this, almost 220 million people in six regions of the world will leave their homes by 2050 for fear of drought, floods, crop failures and other natural disasters triggered by climate change.

According to World Bank estimates, more than 80 percent of them could be persuaded to stay if the fight against global warming were to play a greater role in migration and development policy in all countries. Even if substantial financial resources are required for this, financial professionals can only dream of such a “return on investment”, in order to remain in Müller’s image.

What does this have to do with Afghanistan? Well, according to experts, the majority of Afghans are not fleeing the Taliban, but the drought there and the threat of famine. The country in the Hindu Kush is one of the regions most severely affected by climate change and one of the countries that, due to their poverty, are least able to protect themselves against it.

And what does that have to do with us? Union Chancellor candidate Armin Laschet issued the slogan six years ago with a view to Afghanistan and the refugee crisis: “2015 must not be repeated.” That should be the majority opinion in Germany. If Laschet and Co. are serious, they shouldn’t just look to Central Asia. Some of the biggest hotspots of climate change are right on our doorstep: Morocco, Algeria and Tunisia threaten to become a hub for climate refugees.

In North Africa alone, almost 20 million people could set out on their way, true to the motto: “You will find something better than death everywhere.” The new World Bank study only examined regional refugee movements. However, it is only a matter of time before climate refugees cross borders and seas in search of a better life. 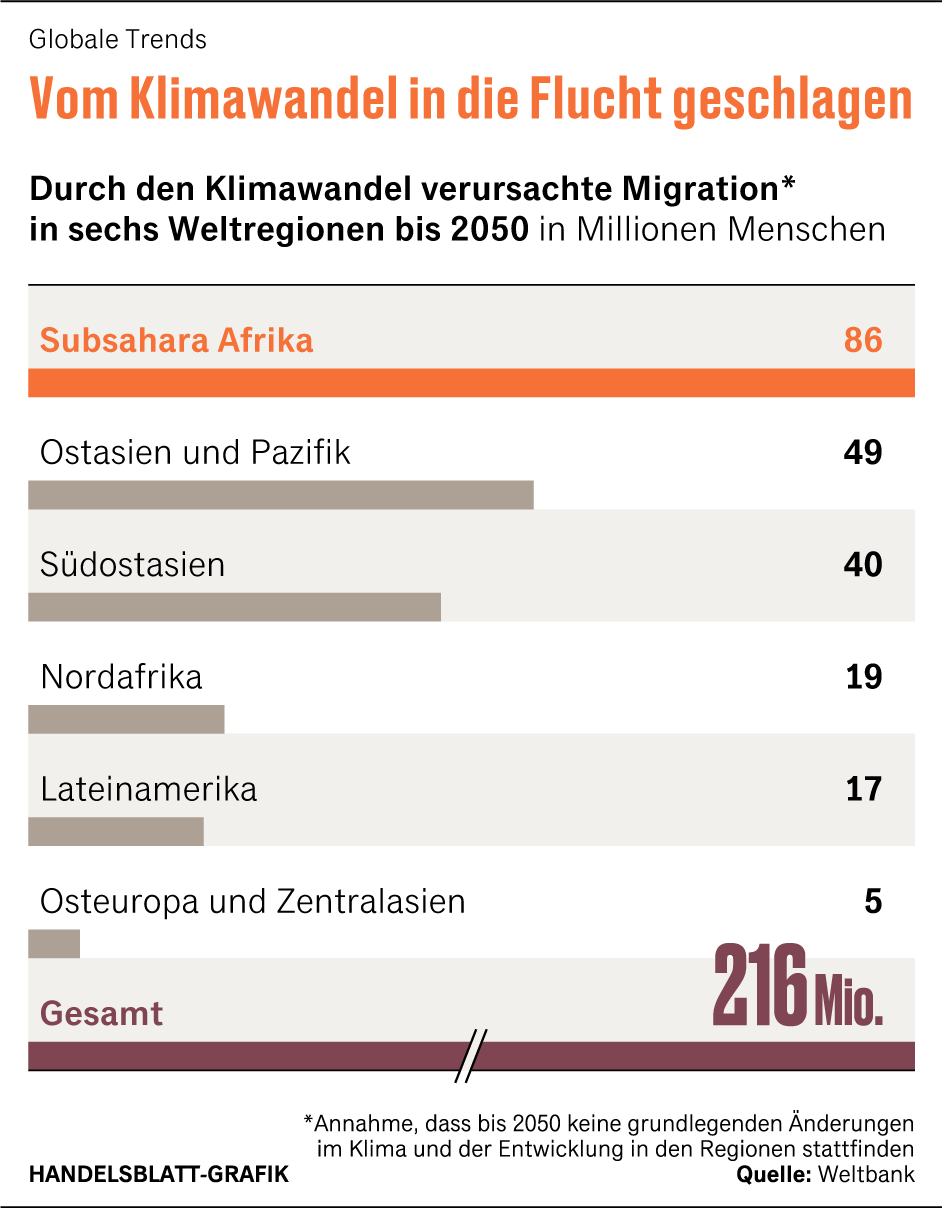 If you believe the callers of the World Bank, Annalena Baerbock of the Greens could be right with her gloomy prognosis in the Triell on Sunday evening that the next federal government may be the last to actively stop the worst consequences of climate change.

Without immediate action, the world will move further and further away from the Paris climate target, which should limit global warming to 1.5 degrees. Instead, according to the World Bank, there is a risk of temperatures rising by up to three degrees by 2100. This would have dramatic consequences, especially for the poorer regions of the world, and could displace hundreds of millions of people there.

Climate change has many faces. In the hardest hit countries, it is evident in the form of water scarcity and dramatically falling crop yields. It manifests itself in storm surges and rising sea levels on the coasts, where often inhabited and agricultural areas are irretrievably lost. And he has the face of extreme natural disasters that we are now feeling even in Germany.

The World Bank warns that, unlike in Germany, where reconstruction plans are already in place for most areas after the flood disaster in summer, climate change is making entire regions in poorer countries uninhabitable.

What to do? The obvious demand is to finally take seriously and implement the targets for reducing greenhouse gases agreed in Paris in 2015 and soon to be reviewed in Glasgow. In addition, the ability to adapt to climate risks must be made a core of future development policy. In concrete terms, this means that resilience and “green deals” must not only exist in the rich industrialized countries, but also in the states at the front of climate change.

Even if we succeed in reducing migration flows, climate refugees will continue to knock on Europe’s door. How little prepared we are for this can already be seen from the fact that, in the opinion of the Federal Government, the word “climate refugees” does not actually exist.

When the United Nations Human Rights Committee decided at the beginning of 2020 in a vote that many described as “historic” that climate refugees could not be denied the right to asylum if their lives were in danger, Berlin made it clear that these people in Germany neither asylum nor Could demand refugee protection.

However, we cannot escape the acid test: If the climate risks become life-threatening, the refugees could invoke the ban on deportation, which protects them from being deported to areas if there is a “significant concrete risk to life, limb or freedom”. However, this is exactly what the World Bank’s new report warns of.

More: The climate change will not endanger our economic growth – it will guarantee it