Tokyo, Bangkok At the Asia-Pacific Economic Cooperation (APEC) summit in Bangkok this Friday, one person in particular is in the spotlight: Chinese President Xi Jinping. But does China really outshine the continent?

China’s rise to become Asia’s largest economy has undoubtedly been breathtaking. Gross domestic product per capita increased 36-fold between 1990 and 2021 to $12,562. But now that Beijing is challenging the US, its neighbors are stepping out of their shadows.

China is likely to remain Asia’s leading power for a long time to come. But the ten members of the Association of Southeast Asian Nations (ASEAN), along with India, have attracted more investment in 2021 than the West’s previous largest workbench, Handelsblatt data analysis shows.

In addition, there is the Chinese real estate crisis, corona lockdowns, an aggressive foreign policy by Beijing, and the increasing economic conflict with the USA. These factors are dampening the Asian superpower’s economic prospects. Companies and governments in other countries are also increasingly looking for new locations for factories and research centers in order to reduce dependence on China.

And they find what they are looking for: the Asean members (Brunei, Cambodia, Indonesia, Laos, Malaysia, Myanmar, the Philippines, Singapore, Thailand and Vietnam) offer low salaries.

>> Read here: The G20 achieve a surprising amount in Bali – also thanks to Olaf Scholz

It is also geostrategically important that the technology powerhouses Japan, South Korea and Taiwan, with their dominance of battery and chip technologies, offer themselves to the West as development partners. They are also setting a counterweight to China when it comes to investments. So there are many good reasons why China’s neighbors will become more important.

For the first time in more than three decades, China’s economic growth has been slower than the rest of Asia’s emerging markets this year. The distance to India is particularly large. There, the gross domestic product (GDP) is increasing at around seven percent, more than twice as fast as in the People’s Republic.

Economists expect the trend reversal to continue in the coming decades. China will remain Asia’s largest economy. When it comes to economic growth, however, India is taking the lead. 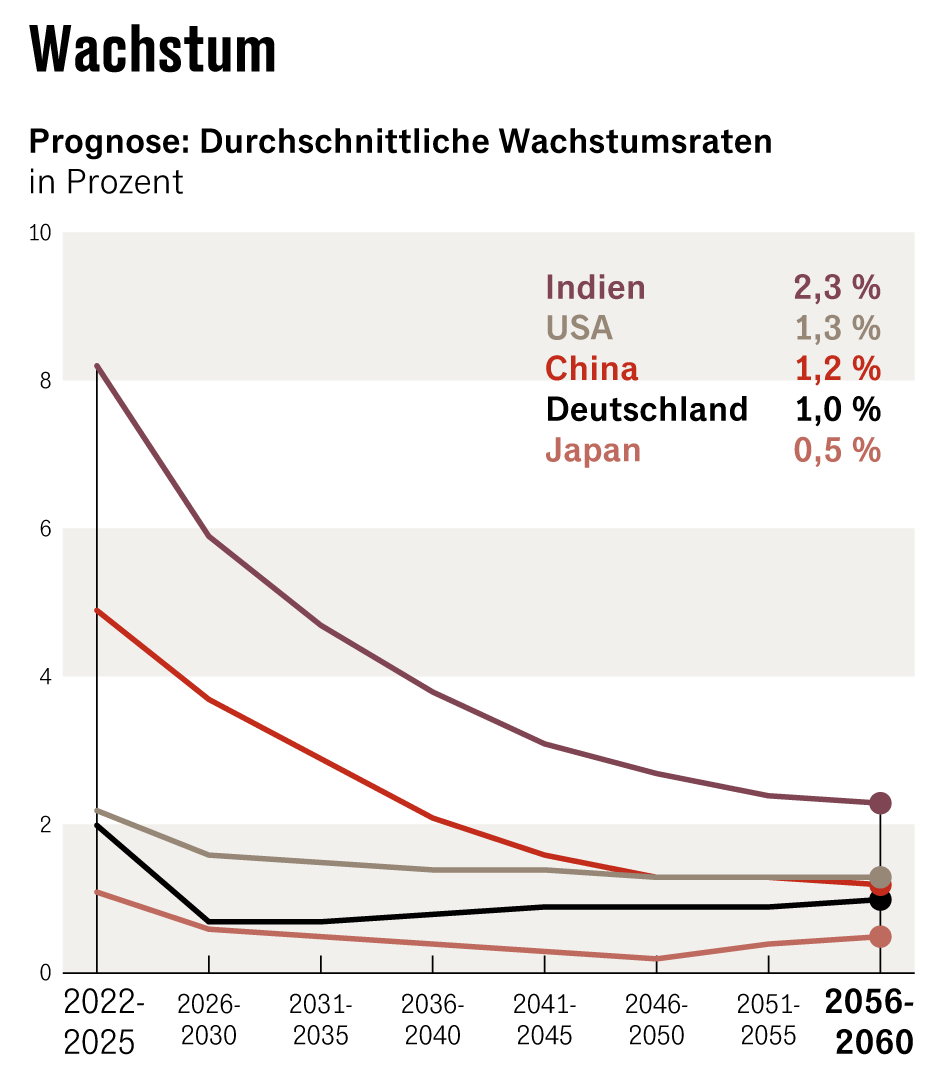 International corporations want to diversify their Asian business more – partly because of the increasing tensions between the USA and China. They are therefore increasingly making new investments outside of China. The south of the continent will benefit most from this shift.

Important new production centers are emerging in countries such as Vietnam, Malaysia and Thailand. In terms of total foreign direct investment, the countries of the Southeast Asian ASEAN alliance are almost on a par with China. If you add the investments that India attracts, then Asia’s south is already well ahead of the People’s Republic. 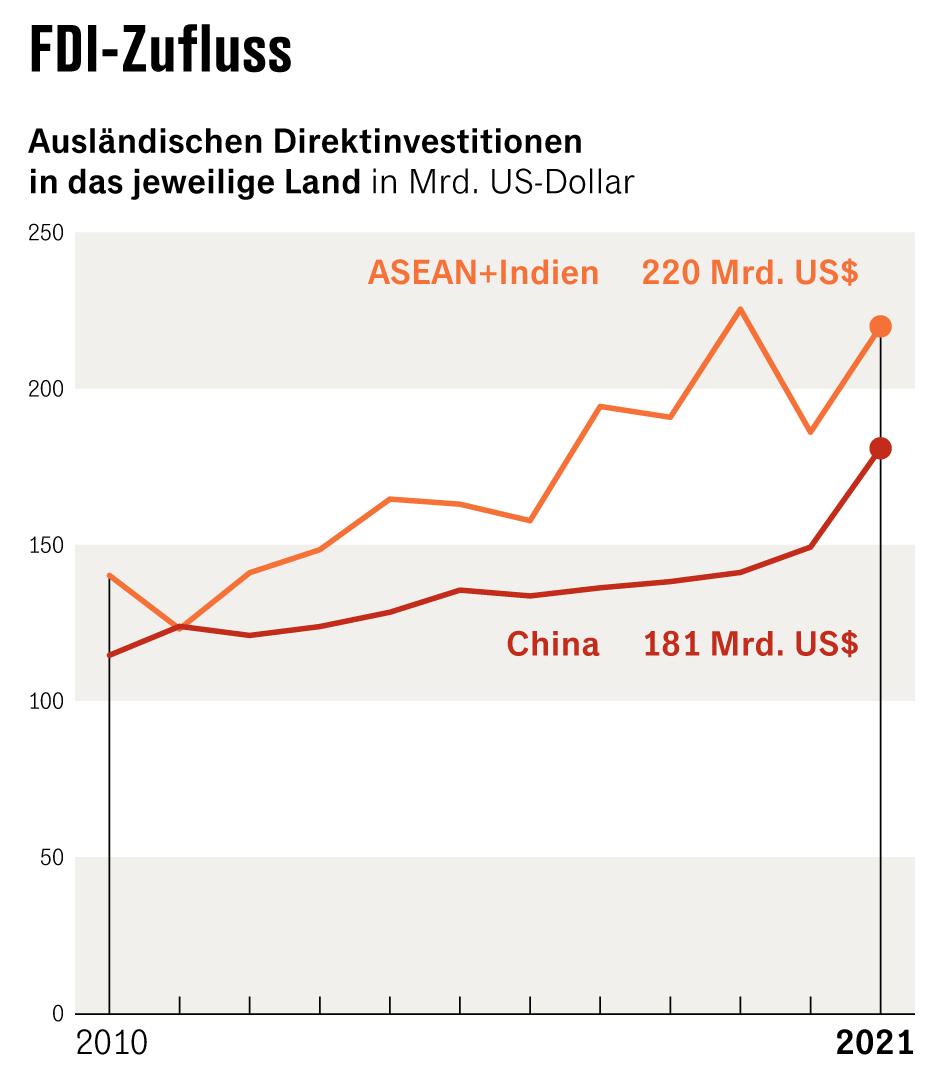 Japan is defying China when it comes to investments

China is one of the biggest Asian investors, but not always the biggest. Neighbor Japan, which has only a tenth of China’s population, just surpassed China in 2021 with foreign investments of 147 billion dollars – as in six of the past ten years.

For Ian Bremmer, head of the political consultant Eurasia Group, this is geopolitically important: The USA made efforts to reach Asia, but without opening the borders for products. “Japan could serve as a bridge,” says Bremmer, for example as a financier of the infrastructure.

>> Read here: EU strategy for economic wars: This is how Europe wants to defend itself against economic blackmail

Other countries would welcome Japan taking a greater leadership role. In addition, the weight of Asean members is also growing. In 2021, they are already investing more than half as much as China outside their national borders. 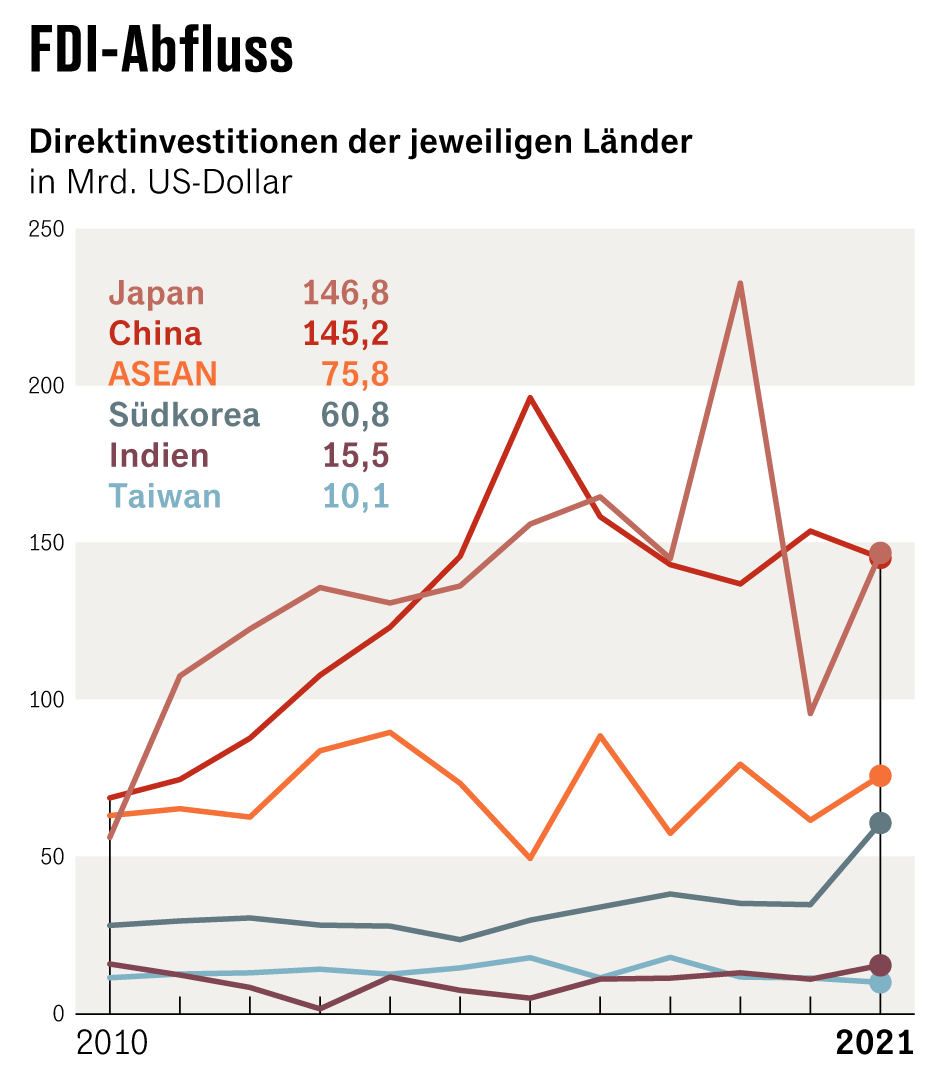 According to United Nations forecasts, India will overtake China as the most populous country in the world next year. The gap between the two countries will increase significantly in the coming decades. Companies doing business in India will find a market of more than one and a half billion people in just a decade.

While China’s society is aging rapidly, India benefits from a comparatively young population. According to forecasts, the median age in 2035 will be just 33 years – on average, Indians are twelve years younger than the Chinese. 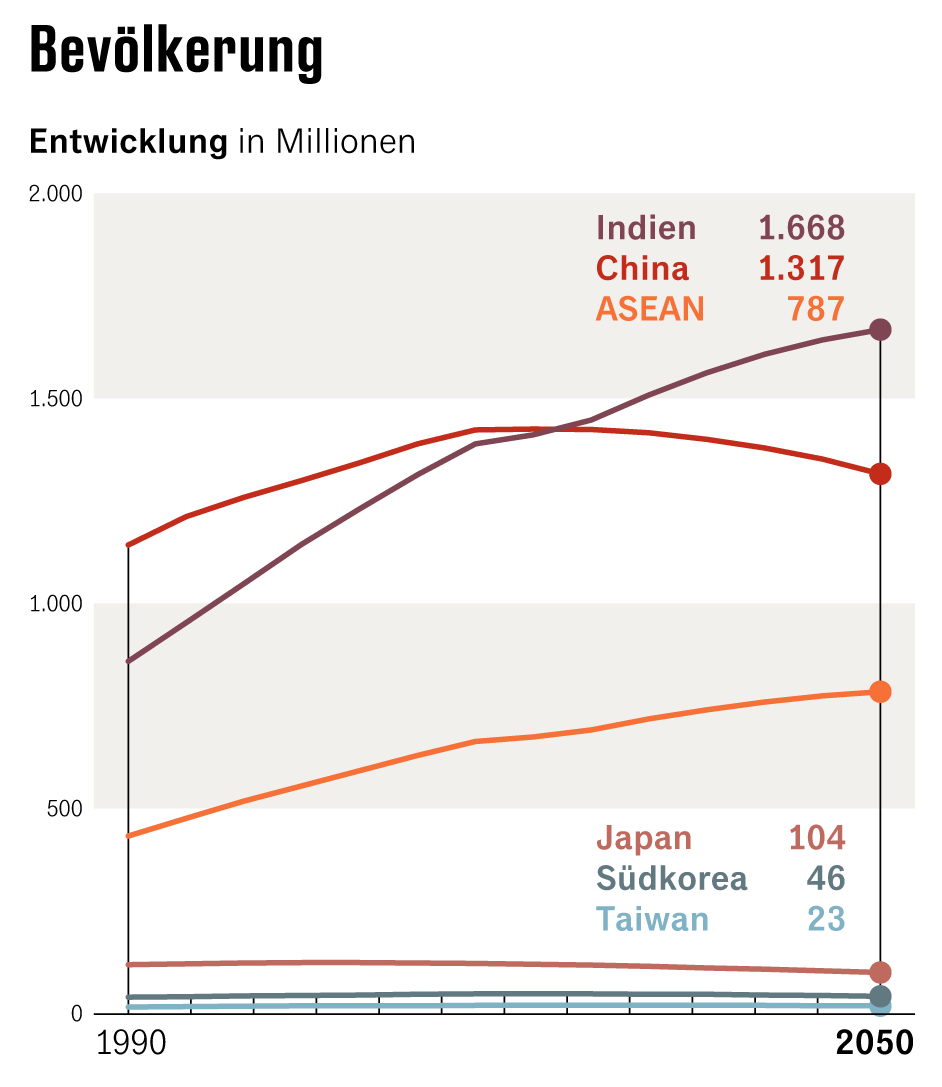 China has risen nominally to become an important innovation power. But research and development spending accounted for just 2.4 percent of GDP in 2020. In Japan it was 3.3 percent, in Taiwan 3.6 percent and South Korea as much as 4.8 percent, and the trend is rising. And the US allies often focus on areas like batteries, electric cars and computer chips, which China wants to dominate.

The industrial policy of the USA is therefore already fully committed to the Asians helping their protecting power. Chip manufacturers from Taiwan and South Korea are building huge chip factories in the USA, while the Japanese and Koreans are also building battery factories. In addition, Washington has agreed a development alliance with Tokyo for the mass production of state-of-the-art two-nanometer chips. 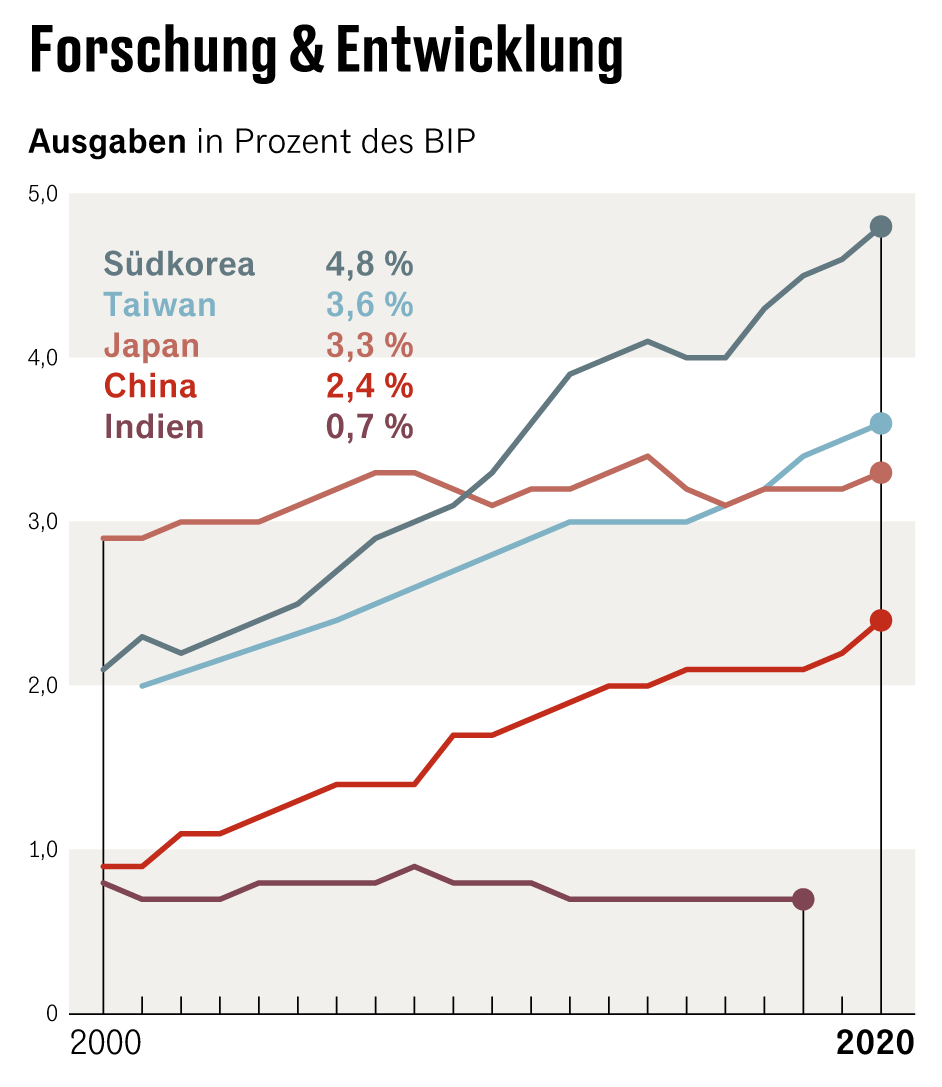 China is Asia’s dominant economic power. But that doesn’t mean it’s easy to make money in the country. For investors who have invested their capital in the Chinese stock market for the long term, there has been little to gain in the past few decades. Since the early 1990s, the MSCI China index has returned an average annual return of just 1 percent – even though China’s economy was booming during the period.

India investors had much more reason to be happy: they have achieved an average annual return of more than eleven percent with the MSCI India Index over the past almost three decades. Huge fortunes were made in the process. Indian industrialist Gautam Adani has risen to become one of the top three richest people in the world this year with a fortune of more than $140 billion – ahead of Amazon boss Jeff Bezos and star investor Warren Buffett. 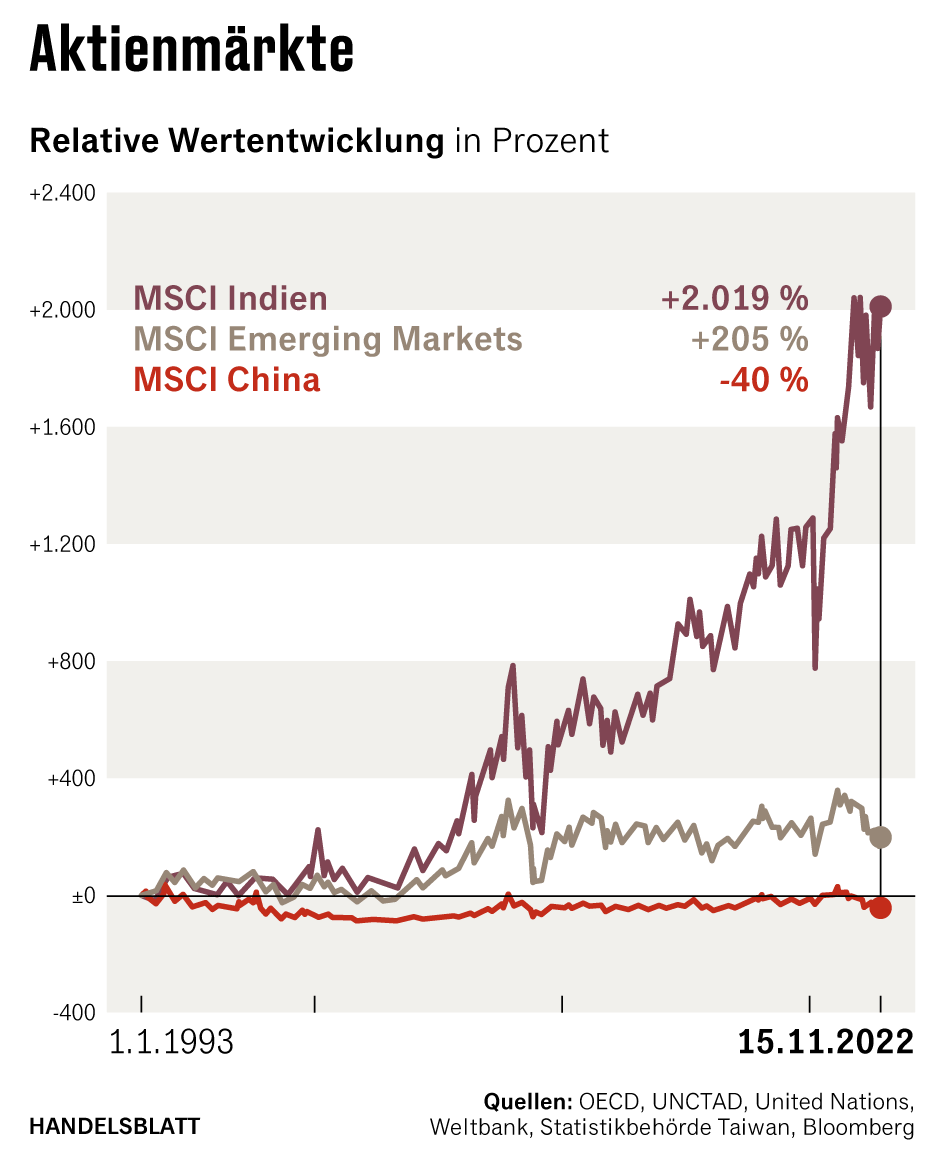 More: The Remarkable Rise of Indonesia – Suddenly leaping into the top ten of the world economy