Frankfurt The financial investor EQT gives up in the struggle for power at the credit agency Schufa. The Swedish investment company is no longer pursuing its plans for a stake in the Wiesbaden company, several people familiar with the topic told the Handelsblatt.

If a consumer in Germany wants to take out a loan, buy a car or rent an apartment, banks, retailers or landlords usually do a credit check with the credit agency, which was founded in 1927 as the “protection group for general loan security”. The credit agency receives 300,000 creditworthiness inquiries every day.

In 2021, EQT had agreed with the major French bank Société Générale to take over their ten percent stake in Schufa and also wanted to buy more shares. The value of the Schufa was estimated at two billion euros at the time.

Savings banks and cooperative banks, however, prevented EQT from taking a majority stake in Schufa. As existing shareholders, they at least partially used their pre-emption rights for the participation of Société Générale – and thereby increased their stake in Schufa to around 55 percent. 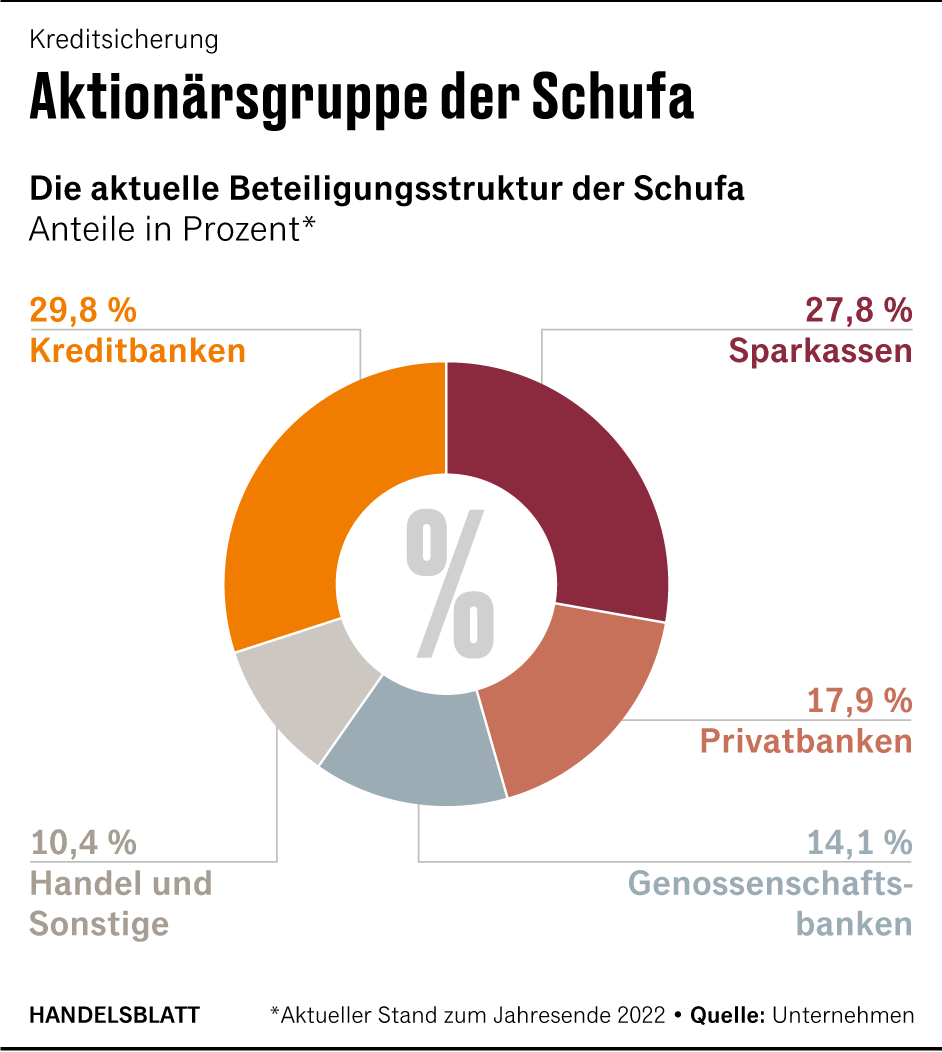 EQT was initially not put off by this and tried to build up a minority stake of 20 to 25 percent. In order to achieve this, the Swedes also negotiated with Deutsche Bank and Commerzbank, which together hold 18.6 percent of Schufa, and were already largely in agreement.

However, like all other agreements, a conclusion was subject to the proviso that EQT agrees with the existing shareholders on general rules of cooperation, for example in voting or in the strategic orientation of Schufa.

Savings banks and cooperative banks that did not want to comment on the subject should be happy about EQT’s withdrawal. The Volks- und Raiffeisenbanken had even announced that they could basically imagine taking over further shares in Schufa. “For us, Schufa is a strategically relevant investment and that’s how we deal with it,” said Marija Kolak, President of the BVR industry association, recently to the Handelsblatt. “That’s why we always take a look when investments change, and can basically imagine increasing our shares further.”

Criticism of the lack of transparency of the Schufa

EQT wanted to significantly expand Schufa’s business. The financial investor wanted to broaden and thus strengthen the company through acquisitions in Europe. In addition, the business with the creditworthiness of companies themselves should be expanded. EQT also wanted consumers to have more insight into the data that goes into their Schufa rating.

Criticism of the Schufa has so far been sparked again and again by the fact that consumers do not understand exactly how their so-called score value comes about. Therefore, for a long time there has been a demand that the company become more transparent here.

Schufa has now announced that it wants to make the origin and composition of the score value clearer. “We have to change,” said company boss Tanja Birkholz. For the year 2024, she announced a smartphone app that you can use to simulate your own Schufa score, for example if you enter additional contracts or new loans there. The former risk manager at Commerzbank has been in charge of Schufa since mid-2020.