These 4 Meme Coins Are Going To The Moon!

Samsung Galaxy A13 5G Introduced: Here are the Features

How Cats Meow and Their Meanings

The launch date of the Redmi Note 12 series has been leaked!

That is in the draft resolution for the federal-state summit

The schedule for the new organization for sustainability ISSB is set

These 3 Cryptocurrencies Will Rise To Epic Highs According To The Famous Whale!

Economically, the EU is recovering from the pandemic faster than expected. In an interview with Handelsblatt and other media, EU Commission Vice Valdis Dombrovskis stated with satisfaction: “Our resolute and coordinated action to contain the crisis is paying off.”

But now the bad news: the economic outlook is “fraught with uncertainty,” as Dombrovskis admitted. New risks arise: The fourth wave of infections has hit the continent, once again contact restrictions are required. At the same time, the supply bottlenecks in industry persist, and Europeans are worried about inflation and especially the high prices for housing.

How should the EU states react to this situation? Together with Monetary Commissioner Paolo Gentiloni and Nicolas Schmit, Dombrovskis presented a whole batch of analyzes and economic reports on Wednesday.

The so-called European Semester Package is intended to provide guidance to the governments of the member states. In it, the Commission sets out its assessment of European economic and budgetary policy and makes general proposals. Detailed country-specific recommendations are to follow in the spring.

The future Berlin traffic light coalition and the new Federal Finance Minister Christian Lindner have already given Brussels a work order: Germany should increase public investment. First, because there is an urgent need – as can be seen from the partially ailing infrastructure and the deficits in digitization. And second, because the federal budget gives it from Brussels’ point of view.

“State investments, measured in terms of economic power, could be increased,” said Dombrovskis when asked by the Handelsblatt, underscoring advice that the Berlin Commission has been giving for years. He hoped this would be reflected in the new government’s priorities.

The Commission is aware that investments in Germany have also been held back by the fact that budget funds actually made available have not been called up, especially at the municipal level.

It is therefore important to improve the planning capacities of the municipalities – so the recommendation from Brussels. The commission recognizes that the outgoing federal government has already taken steps in this direction, but is counting on increasing efforts under the new leadership.

In contrast to Germany, highly indebted EU states should, according to Brussels, prepare to exit the loose financial policy. “In the case of Italy – and to a lesser extent Latvia and Lithuania – we would be cautious given the rapid rise in national spending,” said Dombrovskis. Recently there was a sharp increase in spending in Italy, which now has to be “limited”.

Brussels is not pushing for a general austerity course. In the future, however, the economic stimulus should be directed more specifically towards investments and less towards general support for purchasing power.

The Commission expects the average budget deficit in the euro area this year to be 7.1 percent of economic strength. In 2022 the collective deficit will decrease to 3.9 percent and in 2023 to 2.4 percent. The national debt of the euro countries has now reached the 100 percent mark.

The stability pact, which provides for a debt limit of 60 percent and a deficit limit of three percent, is not to be applied again until 2023. Brussels is committed to relaxing the requirements. Nevertheless, from the perspective of the Commission, it is important to look again at the long-term sustainability of public finances after the phase of acute crisis management. 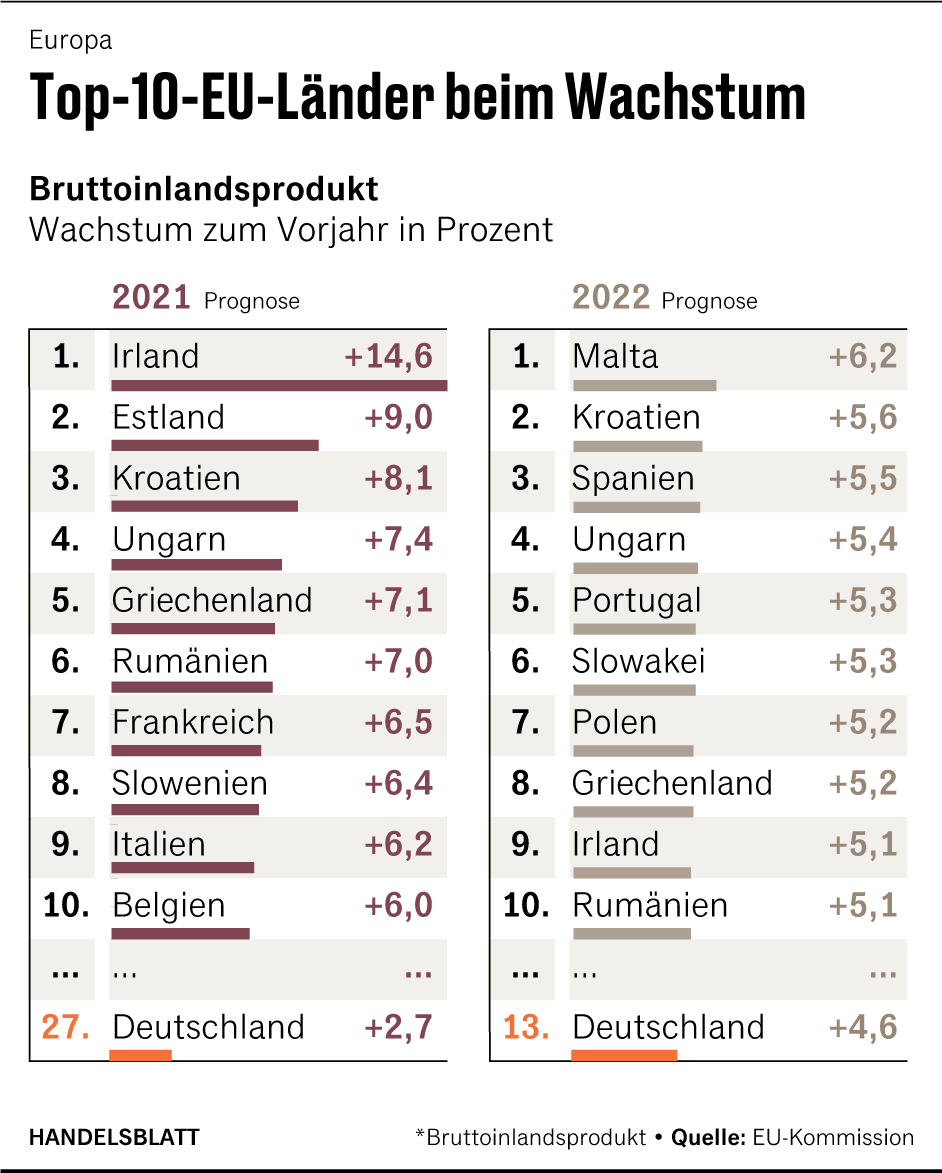 Aid from the Next Generation EU reconstruction fund is available to secure the level of investment, especially in highly indebted countries. To this end, the Commission takes out loans totaling EUR 750 billion and distributes them to the Member States in the form of grants and loans. The goal: Europe should be able to withstand future crises better and at the same time become greener and more digital.

The highly indebted countries particularly badly affected by the pandemic have presented ambitious reform and investment plans, it is praised. The reconstruction plan is seen in Brussels as a “historic opportunity” to drive the economic transformation towards climate neutrality.

However, it will only be seen in a few years whether this hope is actually confirmed. First of all, the EU must succeed in breaking the cycle of loosening and lockdowns. The “reintroduction of restrictions” in a “growing number of member states” will “certainly have an impact on our economies, especially on contact-intensive services”, warned Currency Commissioner Gentiloni. The economic headwind is increasing.

But it is not only the virus that is troubling European companies, but also persistent delivery problems. Auto production in the euro zone has still not recovered, as Gentiloni emphasized, in the third quarter it was still almost 50 percent below its pre-crisis level – which is also one of the reasons why the German economy is so strong remains below the EU cut.