Berlin, Frankfurt The sale of a large Berlin residential portfolio by the Vonovia and Deutsche Wohnen real estate groups to the Berlin Senate is about to be completed. The Berlin Senate Department for Finance announced on Wednesday that the negotiations for the state of Berlin to buy a flat from the holdings of the two groups have been concluded.

Details on the purchase of the real estate by the three national companies Howoge, Degewo and Berlinovo will be presented on Friday. The notarial authentication should take place on Thursday. According to insiders, the package changes hands for around 2.4 billion euros.

According to reports, Berlin is acquiring 14,750 apartments in the capital through the state-owned companies. Vonovia had offered the sale as part of its planned takeover of rival Deutsche Wohnen in order to calm down the heated mood in the capital in the face of rising rents.

Deutsche Wohnen is Berlin’s largest private landlord and has so far rented around 114,000 of the more than 155,000 own apartments in Germany. Originally, the corporations had even agreed with the Berlin Senate to sell around 20,000 residential units to the country. For some time, however, it has become apparent that the purchase volume would be smaller.

The state of Berlin and the corporations could not agree on a common price for some of the apartments, it is said in negotiating circles. “The apartments were selected by the Senate and, as announced, we offered 20,000,” said an insider. “This is because the price expectations for some apartments did not match.”

Less than 12,000 of these apartments – and thus around 60 percent of the package – should originally come from the Deutsche Wohnen portfolio, emphasized Deutsche Wohnen boss Michael Zahn when presenting the plans. “We sell exclusively from the so-called non-strategic portfolio.” That includes residential units that Deutsche Wohnen does not want to manage in the long term anyway.

The leader of the Greens in the Berlin House of Representatives, Antje Kapek, criticized this week for the fact that the deal is not transparent enough. Before the summer break, catalogs of questions were submitted about the condition, location and need for renovation of the apartments. And none of these questions have been answered.

Vonovia boss Rolf Buch still considers the looming deal to be an important success. It had become clear that the corporations wanted to work with the city, it was primarily about the signal that something was changing, he told Handelsblatt earlier this week about the ongoing negotiations. “I think we achieved that.”

The timing of the deal is unlikely to be a coincidence. At the same time as the House of Representatives election on September 26th, Berlin will vote in a referendum on whether the Senate should consider expropriating large housing groups such as Deutsche Wohnen for compensation. The bottom line is that the vote is about well over 200,000 of the around 1.5 million rental apartments in Berlin. They are owned by more than a dozen real estate companies. With the idea of ​​expropriation, the initiative aims to put a stop to “speculators” who drive up rents. 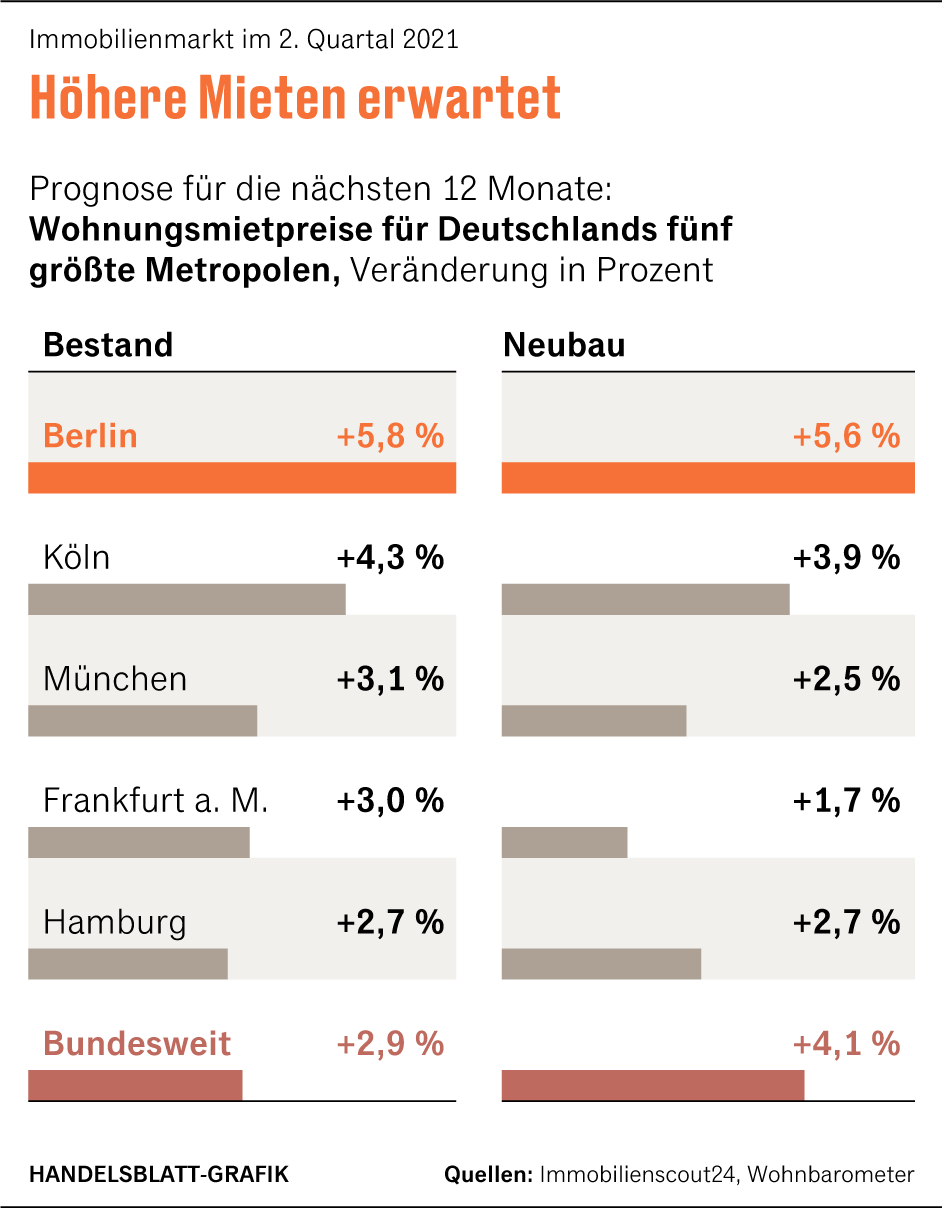 “Even if a majority is in favor of expropriating the housing corporations, there has not yet been any expropriation,” emphasized Buch. Several parties that are responsible in Berlin would see such a step critically.

“Meanwhile, many see it this way that the expropriation debate shows that Berliners fear that they will no longer be able to afford their apartment,” argues the Vonovia boss. “So we can’t go on as before, we finally have to take care of the new building – together.” If you understand it that way, the expropriation debate has actually already achieved what it wanted.

Vonovia had canceled the acceptance threshold

The dispossession debate also casts a shadow over Vonovia’s current multi-billion dollar takeover of Deutsche Wohnen. The Bochum Dax group moved away from its previous conditions this week in the struggle to take over the competitor. Vonovia had, among other things, removed the minimum acceptance threshold of 50 percent of Deutsche Wohnen shares from its takeover offer.

By waiving the closing conditions of the takeover offer, the acceptance period, which originally expired on September 20, 2021, was extended by two weeks and will now end on October 4, 2021. “The book is now closing the sack,” commented Marc Tüngler from the German Association for Protection of Securities, “the drop is sucked.”

Because now the Bochum company can take over the number two on the German housing market even if the investors should not offer them the majority of the shares again. Vonovia had previously made it a condition for its offer that Deutsche Wohnen investors exchange at least more than 50 percent of their shares for a cash offer of 53 euros per paper. The Handelsblatt had first reported on a possible cancellation of the acceptance threshold.

More: Vonovia boss sees himself on target with the mega-deal: What investors need to know now