New York, Frankfurt US inflation fell in July. The inflation rate was 8.5 percent, as announced by the US Department of Labor in Washington on Wednesday. That’s down from June, when it was 9.1 percent. Economists surveyed by the Bloomberg news agency had previously expected a figure of 8.7 percent.

The main reason for the decline was lower petrol prices, which fell compared to June. The markets reacted positively. The Dax jumped after the publication and was up over one percent in the early afternoon.

The US markets also started the New York trading day with a significant upswing. The Dow Jones leading index initially rose by 1.3 percent, while the broad S&P 500 rose by 1.6 percent. The technology-heavy Nasdaq even rose by more than two percent.

Economists are now discussing the question of whether the peak in price increases has now been reached. Harvard professor Jason Furman warns against too much optimism. “The data is a step in the right direction,” he said on the US stock exchange broadcaster CNBC. But it remains to be seen whether price increases will continue to decline in the coming months.

Fed Chair Jerome Powell stressed at the last meeting in late July that inflation would have to fall significantly for several months in a row before they would change their monetary policy course. Powell had emphasized that he wanted to bring the inflation rate back to the two percent mark. This is the only way to ensure long-term economic and job growth.

The pressure on the central bankers remains high. On Friday, very strong employment figures had strengthened the expectation that the Fed would continue to raise key interest rates very sharply. The central bank is under massive pressure because it initially underestimated inflation.

It has raised interest rates four times since March, most recently by 0.75 percentage points in June and July. They are now in a range of 2.25 to 2.5 percent. Many economists believe further interest rate hikes are necessary – even though inflation may now have peaked.

Recently, there have been some signs of weaker price momentum. Oil and commodity prices have been falling since the beginning of June, and global food prices have not risen quite as much as before. There are also signs that the supply bottlenecks are easing. Freight rates, i.e. the costs for transporting containers by ship, have also fallen recently.

However, housing costs continued to rise – which could become a longer-term problem, believes Diane Swonk, chief economist at management consultancy KPMG. Rents would only drop again very slowly if the economy weakened. But they carry a lot of weight when measuring price increases. That is also one reason why the most difficult part for the central bankers would only come at the end, when it comes to reducing inflation from four to two percent. Core inflation, which excludes volatile food and energy prices, also continued to rise in July.

Therefore, the situation for US consumers remains tense, says Stephanie Link, portfolio manager at wealth manager Hightower. Because even if inflation has fallen slightly, “prices continue to rise and consumers are suffering”.

The San Francisco regional central bank expects rapidly rising rents to account for 1.1 percentage point of inflation this year and next, and 0.5 percentage point of core inflation. Rents have been rising at a slightly slower rate of late, but they are still on average 14 percent higher than 12 months ago, according to data from broker Redin. In some metropolitan areas such as Cincinnati in the US state of Ohio, Austin, Texas and New York, the increases were sometimes more than twice as high. 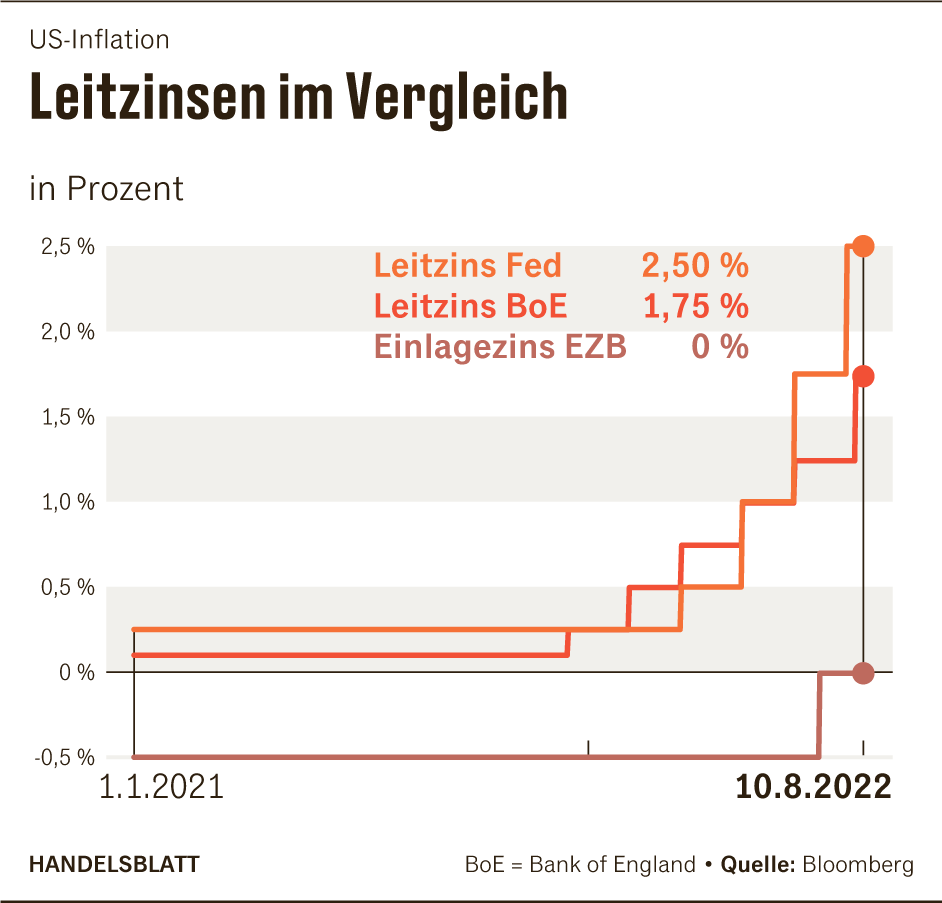 The chief economist at the US investment bank Goldman Sachs, Jan Hatzius, expects a further decline in inflation. “The most immediate reason is the almost 20 percent drop in gasoline prices since mid-June,” he writes in a recent comment. He estimates that this alone will reduce inflation by one percentage point over the next two to three months. He also sees improvements in the problems in the supply chains. The prices for services continue to worry him.

The threat of recession is not over yet

Fed Chair Powell remains hopeful of cooling the economy without causing a recession. But the probability of that succeeding is low. The recent strong signals from the labor market should not be taken as a sign that the risk of recession is over, warned Mohamed El-Erian, who advises Allianz, among others. Aggressive rate hikes and the downsizing of $9 trillion in total assets could “pull the rug out from under the feet of the economy and markets,” he wrote in a op-ed piece in the Financial Times. 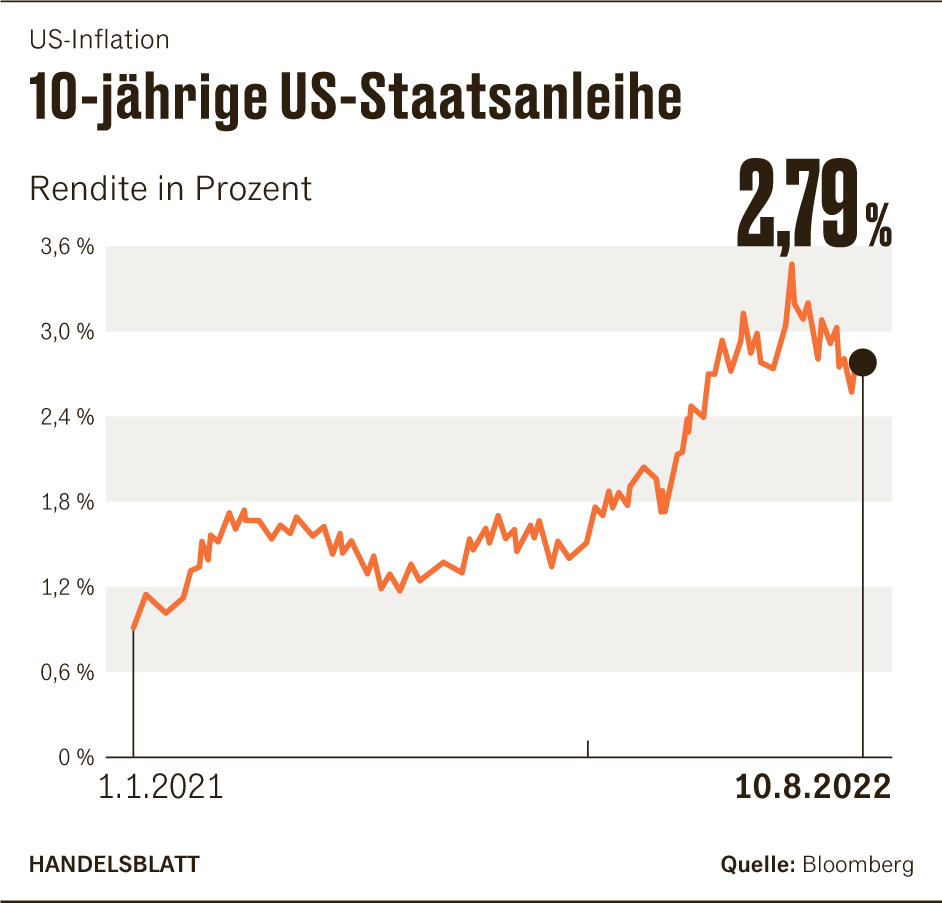 Hatzius expects the Fed to weaken its course slightly. He assumes that the central bank will raise interest rates by 0.5 percentage points and then by a quarter of a percentage point in November and December. After that, he will not take any further steps. “We see no additional hikes in 2023 because we expect growth to remain well below trend and inflation to continue falling steadily.”

Many economists assume that in Europe, unlike in the USA, the peak of inflation is yet to come. This is because in Germany, as the largest economy in the euro area, the nine-euro ticket and the fuel discount, which have recently dampened inflation, will expire at the end of August.

Most importantly, gas prices could drive up inflation here even more in the coming months. This is especially true if Russia stops shipping to Germany and other countries. This could then lead to further price increases in sectors that are heavily dependent on gas, such as the chemical industry.

Gas prices tend to have a delayed impact on inflation because they don’t adjust as quickly for households. That could change in Germany with the planned gas levy. From October, the federal government wants to make it easier for suppliers to pass on the additional costs caused by the failure of Russian deliveries to gas consumers. This could then push up inflation further. Economists therefore expect inflation to peak in the euro area in September or October. However, the uncertainty here is greater than in the USA.

More: Has inflation peaked? How experts assess the situation in the USA and Europe

The most popular cryptocurrencies in Cardano (ADA) Last year, the Alonzo Hardfork took place on this very day. According to...