Frankfurt, Düsseldorf Stefan Baumert looks to the end of the year with confidence. “The Germans’ desire to travel is unbroken,” said the CEO of Tui Germany on Monday afternoon. Almost all destinations are available again. “In the Maldives we even have higher booking numbers than before the crisis.”

“Demand is still high, especially in the direction of the USA. Only in Austria are we currently seeing some cancellations due to the lockdown, ”said a spokesman. Condor also reports that the booking situation remains strong.

But every day the risk increases that the providers get stuck with parts of their offer. The first alarm signals are already there: Norbert Kunz, Managing Director of the German Tourism Association (DTV) complained a few days ago that the tourism industry is seeing more cancellations and a great reluctance to book.

The situation is fragile. Gerald Wissel from Airborne Consulting, which specializes in aviation, can currently not see a bubble. There is a lot of catching up to do, and in view of this, the capacity planning of airlines and tour operators is still rather cautious. “The risk, however, is that some countries will for their part decide new entry restrictions, such as 2G or 2G plus negative test. That could put customers off, ”warns Wissel.

The airlines and travel agents are aware of this danger. “We have to watch it very closely,” says Lufthansa.

In fact, the negative news is increasing. A few days ago the Federal Foreign Office advised that it would be better to refrain from cruises. This is another heavy burden for the booking business of the Tui shipping companies Tui Cruises, Hapag-Lloyd Cruises and Marbella, which just started up again in the summer months.

The stock exchange punishes Lufthansa and Tui as a precaution

Last Friday, the Robert Koch Institute (RKI) then declared Greece, Holland, Belgium and Ireland to be high-risk areas. For the Czech Republic and Austria, which make up around 50 percent of all European holiday travel destinations in the winter season, this classification has been in place since November 14th.

This does not change anything for vaccinated and recovered holidaymakers. Unvaccinated people, however, have to be in quarantine for at least five days after their return home in Germany. This also applies to children who have not yet been vaccinated. For many vacationers, this could thwart their previous plans.

Tui manager Baumert remains calm. Nile cruises would take place this winter as planned. “With a few exceptions, Mein Schiff already has the 2G rule.” And if countries like Costa Rica were to switch to 1G from next year, that could also be implemented. Customers would have got used to the new normality of traveling, where registering or being tested or showing proof of vaccination are just as much a part of everyday life as finding out about entry requirements in good time.

Of course, the hotels in Austria could not open because of the current lockdown, said Baumert. But the ski season won’t start for a few weeks. “I can’t imagine that the Austrian example will catch on across the board,” says the Tui manager: “I’m confident that the ski season can still take place.” Some hotels in Austria even have a waiting list for the time after Holidays.

But not everyone shares this confidence. The escalating corona situation is putting pressure on the share prices of airlines and travel providers, investors are cautious. The Lufthansa share has lost around 13 percent of its value since the beginning of November. The Tui paper has lost a quarter since the beginning of October, after the group had secured a little more than a billion euros through a capital increase.

Analysts welcome the successful capital increase that Tui Puffer will give into the coming year. The US analysis company Bernstein Research also upgraded the group from “Underperform” to “Market Perform”. But the experts remained cautious with the target price, the share still has a downside potential of around ten percent based on the current price level, it said a few weeks ago.

This shows: For the travel company from Hanover, the short-term recovery, which was also reflected in the stock market at the beginning of October, has already fizzled out again. A slight turnaround was on the horizon. After the successful capital increase, the rating agency Standard & Poor’s (S&P) raised the credit rating to “B–”. Instead of a “substantial risk”, the analysts rated Tuis debt as “highly speculative”.

For the heavily indebted group, which the state supported in the corona crisis with 4.3 billion euros in guarantees, loans and investments, the situation has improved, S&P announced. Tui can now reduce the oppressive liabilities by successfully issuing new shares. 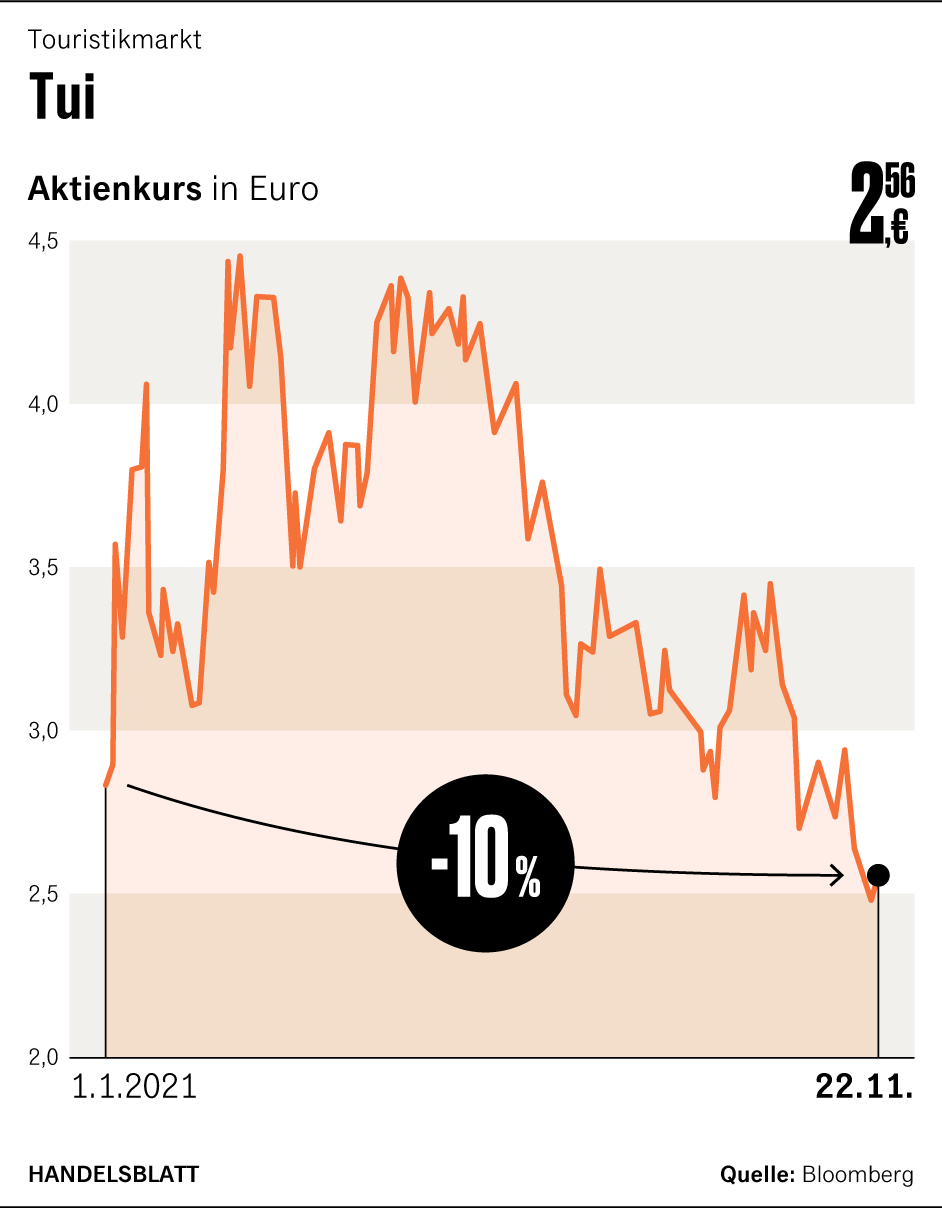 But for this the group needs a stable and good core business. According to Baumert, the company has ordered 60 and 80 percent of the usual program for winter 2021/22 from hotels and airlines. Now the question is whether he can also discontinue all of this. The booking figures for October had already shown that the travel market would not recover as quickly.

According to the “travel agency mirror” of the tourism service provider Travel Agency Technologies & Services (Tats), which is highly regarded in the industry, the total turnover invoiced by travel agencies, brokers and agencies in the past month was 49.6 percent below the business in October 2019. Bookings rose in the ten months from January to October compared to 2020 by six percent. Compared to the same period in 2019, however, they were 74.2 percent lower.

As the German Travel Association (DRV) found in a survey of 550 tourism companies in mid-October, 60 percent of companies do not expect sales to return to pre-crisis levels until 2023. A third even thinks this is not conceivable until 2024. TUI manager Baumert, on the other hand, wants to achieve booking numbers like 2019, i.e. before the crisis, in the coming year.

It is almost impossible for the industry to make forecasts that span several months. Bookings are made at short notice than ever before, which puts the organizers in a row by the plannability. In the main holiday months of July and August, Travel Data + Analytics (TDA) found that 55 to 61 percent of all trips were made less than four weeks before departure.

The crisis hit all tour operators. The Munich Tui rival FTI had to call on the state for help, as did the travel company Trendtours from Kriftel near Frankfurt. Tui follower DER Touristik benefited from its financially strong parent company Rewe, but the Cologne-based travel company with brands such as Meiers Weltreisen, Jahnreisen and ITS couldn’t make ends meet without downsizing and short-time work.

But Tui was hit the hardest. In the middle of the main summer season of 2021, the group had used up all of its equity. At the end of June 2021, there was a gap of 525 million euros in the balance sheet, while there had been 193 million euros three months earlier. The reason was a quarterly loss of 940 million euros after 1.5 billion euros in the corresponding quarter of the previous year.

Only the capital increase completed in October eased the situation again. “There is no reason to worry about the Tui,” said a spokesman on Monday with a view to liquidity and the debt burden.

More: Get a travel voucher while Corona? You should be aware of this