he really wants to know again: On Tuesday evening US Eastern Time, ex-President Donald Trump announced that he intends to run as the Republican candidate in the US presidential election.

Whether the Republican Party wants him as a candidate again will be the most exciting question in the coming months. With Ron DeSantis, the newly re-elected governor of Florida, there is at least one politician who could challenge Trump’s candidacy. And the midterms, the general elections in the USA, went worse than planned for the radical candidates supported by Trump.

The Republicans have missed an absolute majority in the Senate, and they are still missing two seats in the House of Representatives – but a majority for the Republicans is likely here, because 14 constituencies are still being counted.

The Washington Post has already reported on it Details of Trump’s campaign planning. The core message: Everything should be like the win in 2016, not like the defeat in 2020. According to the Washington Post, this means in concrete terms: The campaign should be kept lean and efficient and controlled from Florida, not from Washington. The paper quotes Trump as saying that in the 2020 election campaign he sometimes no longer knew himself who was responsible for what on his campaign team.

The “fog of war”, which the grand master of strategy Carl von Clausewitz pondered, creates its own realities. The degree of chaos that inevitably accompanies any military conflict forces decisions to be made under uncertainty – with an increased risk of being wrong. In such situations, it is crucial to be clear about what you do not know.

The specific case: According to Polish media reports, two people died yesterday when a rocket of unknown origin hit Poland, a few kilometers from the Ukrainian border. It would be the first such incident in Russia’s nearly nine-month war of aggression against Ukraine. Poland is a member of the western defense alliance NATO.

Poland’s Prime Minister Mateusz Morawiecki called a meeting of the National Security Council, his spokesman said on Twitter. And also on Twitter, the ex-Ambassador of Ukraine to Germany, Andriy Melnyk, demanded at lightning speed: “NATO must react to this targeted attack by Russia with very painful consequences.”

Easy Tiger! One of the uncertainties in the fog of war is the question: is this actually a targeted attack? As of press time, the Russians deny and US President Biden says the missile was probably not launched from Russia. Instead, it is an anti-aircraft missile from Ukraine.

According to the Reuters news agency, the NATO countries are meeting today. This is happening at Poland’s request on the basis of Article 4 of the NATO charter, European diplomats said during the night. Article 4 provides for consultations when a member country feels threatened. Important: Such consultations are not synonymous with the NATO alliance case.

For years, the mantra at fluffy New Work congresses has been: Clever companies keep their staff even in times of crisis, because getting them back in the next upswing is becoming more and more expensive and difficult in times of a shortage of skilled workers.

Apparently this message has not yet arrived on the American west coast. At least the US tech companies are reacting to the current downturn in the same way they have behaved in every crisis so far: costs down, people out.

Amazon is laying off 10,000 employees from various areas such as retail, human resources and loss-making voice control Alexa, US media reports. It would be the biggest cut in the history of the company and could affect around one percent of the entire workforce. Among the employees it would even be three percent. Our New York office manager Katharina Kort sees this as proof of the lack of vision on the part of Andy Jassy, ​​who took over the top post from Amazon founder Jeff Bezos in July 2021. 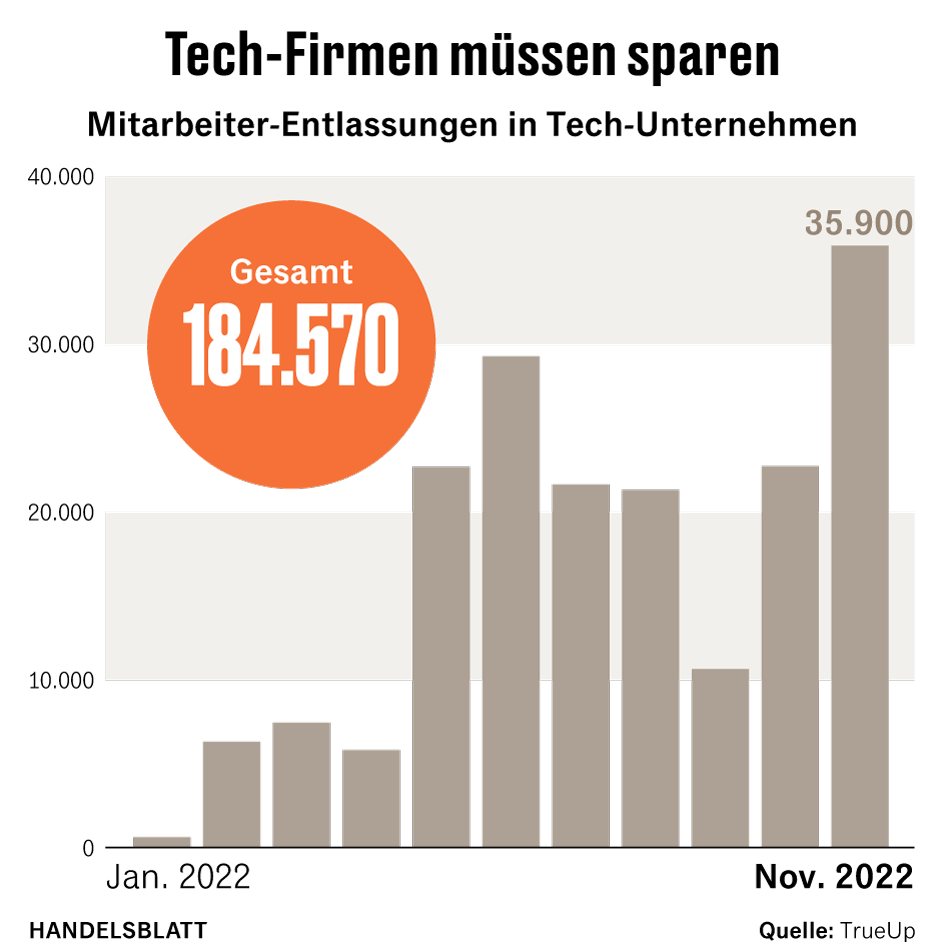 Numerous other well-known tech companies such as Meta, Twitter, Salesforce and Stripe have cut jobs in recent weeks. According to industry service TrueUp, there will be a total of 185,000 jobs worldwide by 2022. DA Davidson analyst Tom Forte is certain: “There will be more layoffs.”

He already draws parallels to the labor market after the dot-com bubble burst shortly after the turn of the millennium. There is also a not very fluffy theory about the US tech sector: Its success stems from the fact that highly qualified employees do not sit around unproductively in corporations during a crisis, but are fired in a jiffy, then of necessity start in the next start-up or found one yourself – and thus initiate the coming wave of innovation.

Who knows: maybe three of the 185,000 layoffs are sitting together right now and hatching the business idea that will make life difficult for Amazon or Meta in a few years.

I wish you a day full of metagood ideas.

PS: Times, energy and financial turnaround – how will things continue economically and geopolitically in the new year and what does that mean in concrete terms for the stock market? Handelsblatt Editor-in-Chief Sebastian Matthes and Dr. Ulrich Stephan, Chief Investment Strategist Private and Corporate Clients, Deutsche Bank AG, will discuss this at Investment Live on November 28 from 5 p.m. in Düsseldorf. We are giving away ten guest tickets among all interested parties. On site you can also expect exciting insights from the Handelsblatt editorial team. Apply now and send us an email to: [email protected]