Berlin From the middle of the decade, the baby boomer cohorts will retire. Without immigration and rising employment rates, demographics would cause the number of people available in the labor market to drop by more than seven million by 2035, according to a study by the Institute for Labor Market and Occupational Research (IAB).

But the authors around IAB researcher Enzo Weber also make suggestions as to how countermeasures can be taken:

The employment rate of women has increased significantly in recent years. In the middle age groups of 30 to 59 year olds, it is 85 to 90 percent but still slightly below that of men with more than 90 percent. Potential could be leveraged above all among women without a German passport, whose employment rate is up to 20 percentage points lower than that of German women.

According to the IAB analysis, the employment rates of 60 to 64 year olds are still up to 20 percentage points below those of 55 to 59 year olds. A lot of potential has already been tapped here in the past. 20 years ago the gap was up to 40 percentage points. And with retirement at 67, the labor force participation of older people is likely to continue to increase, the researchers expect.

The IAB shows three scenarios and their possible effects on the labor force potential:

Taken together, these scenarios would mean that around 3.4 million additional workers would be available on the labor market in 2035, which means that demographic shrinkage would be reduced by around half. 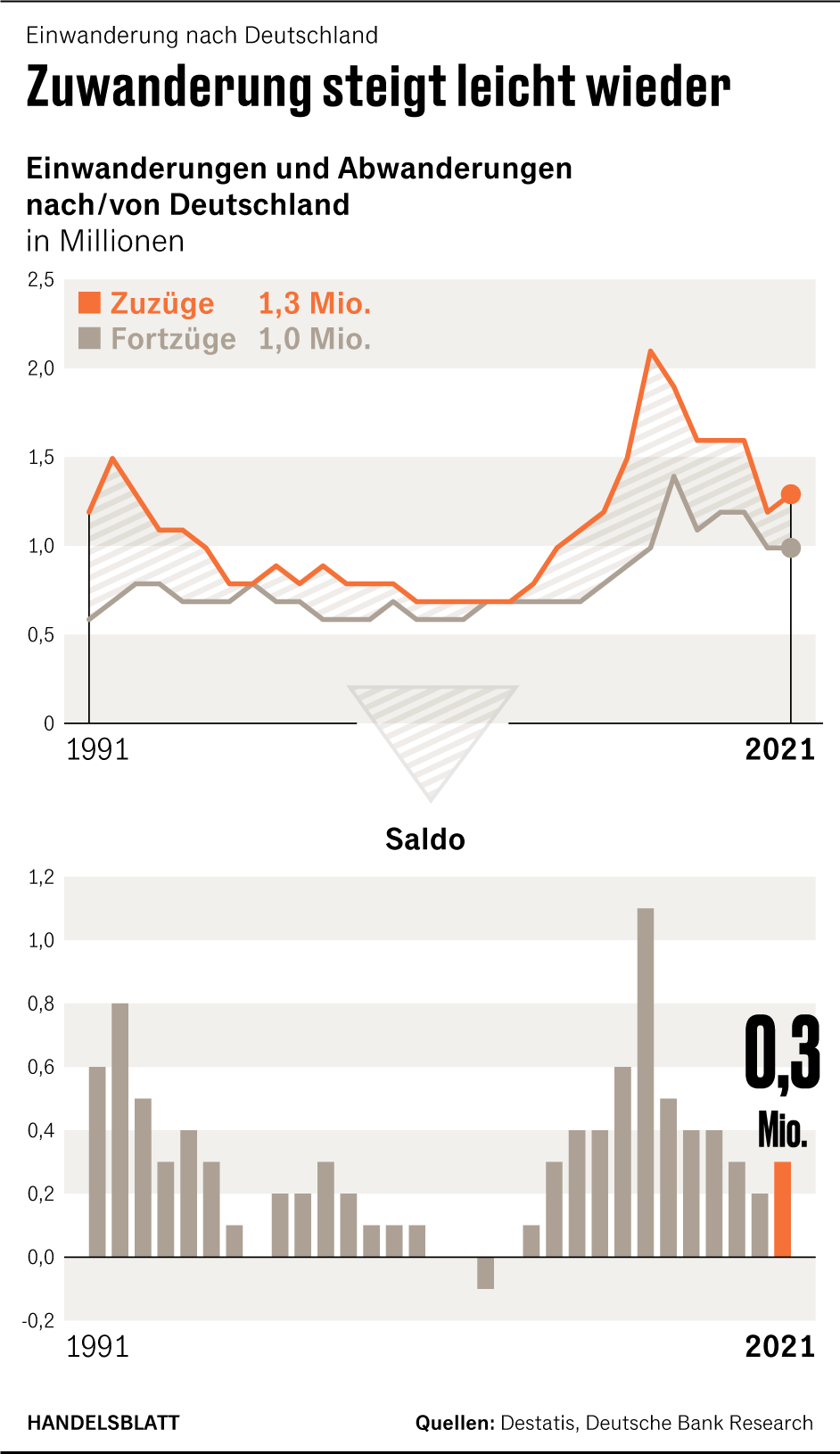 Increase immigration and willingness to stay

If 100,000 more people immigrate than emigrate each year, the potential labor force would increase by 1.5 million people by 2035 according to the IAB calculations – if the age and gender structure of the immigrants corresponds to the average of the past ten years.

In the past year, the migration balance was 330,000 people. If it were kept every year, around 3.7 million additional people would be available for the labor market in 2035. However, this is ambitious.

Because if one assumes that the emigration rate of the foreign population is 9.1 percent annually – as on average in the 2010s – gross immigration would have to increase from the current 1.14 million foreigners to 1.64 million by 2035 if below the Last year’s net migration of almost 330,000 people is to be reached every year.

However, since many of the main countries of origin in Central and Eastern Europe are now struggling with demographic problems themselves and immigration is therefore likely to decline, more must be done to persuade people who have immigrated to stay, write the IAB researchers.

Labor market experts speak of full employment when an unemployment rate of two to three percent is reached. In October, the rate was 5.3 percent.

If it succeeds in reducing it to 2.5 percent by 2035 through better support and integration of the unemployed, an additional 1.3 million people would be available to the labor market.

Theoretically, the imminent labor shortage could be reduced by almost 1.4 million employees if existing working time requests could be implemented. About four out of ten employees work part-time. Twelve percent of men and eight percent of women stated that they did this involuntarily. Many mini-jobbers would also like to work more.

However, this potential will hardly be able to be fully exploited because the supply and demand for work do not always match in terms of qualifications, place of residence or occupation.

Pininfarina, the automobile design company that Togg worked with during the design process of the domestic car, produced specially designed...