Sony may be working on the PlayStation handheld!

TOGG CEO talked about the price of the domestic car!

The inflation debate is going in circles. Is it temporary or permanent? First, the former US Treasury Secretary Larry Summers declares his team “permanent” the winner and refers to the strongest surge in inflation in the US for more than 30 years. Then Paul Krugman from the “Temporary” team counters and points to a new study by the Bank for International Settlements (BIS), according to which the price surge is primarily the result of global delivery bottlenecks, and which, according to the Nobel Laureate in Economics, passed.

The same picture in Germany: Deutsche Bank boss Christian Sewing warns of a prolonged price wave and calls on the European Central Bank (ECB) to take countermeasures. ECB boss Christine Lagarde blames base effects and a temporary surge in energy prices above all for the current high inflation rates. Monetary policy must therefore remain “patient”.

The honest answer is: We don’t know if we are at the beginning of a long wave of inflation or if the whole spook will be over in the second half of next year. The central bankers have to choose between plague and cholera: wait and see, inflation could develop a long-term dynamic. If they step on the interest rate brake, they could stall the economic recovery after the pandemic early, which would cost millions of people their jobs.

However, this dilemma must not render us incapable of acting. Instead of fighting in a fundamental economic debate about the causes of inflation, it is time to take a pragmatic approach to the problem of sharply rising prices.

Regardless of whether the inflation is temporary or permanent, it is now a matter of reducing the current price pressure – even without crushing the entire upswing with the interest rate hammer of the central bank. Instead, it is worth taking a look at trade restrictions, which are driving up import prices in the USA and Great Britain in particular, but which have so far been overlooked in the blind spot of the inflation debate. 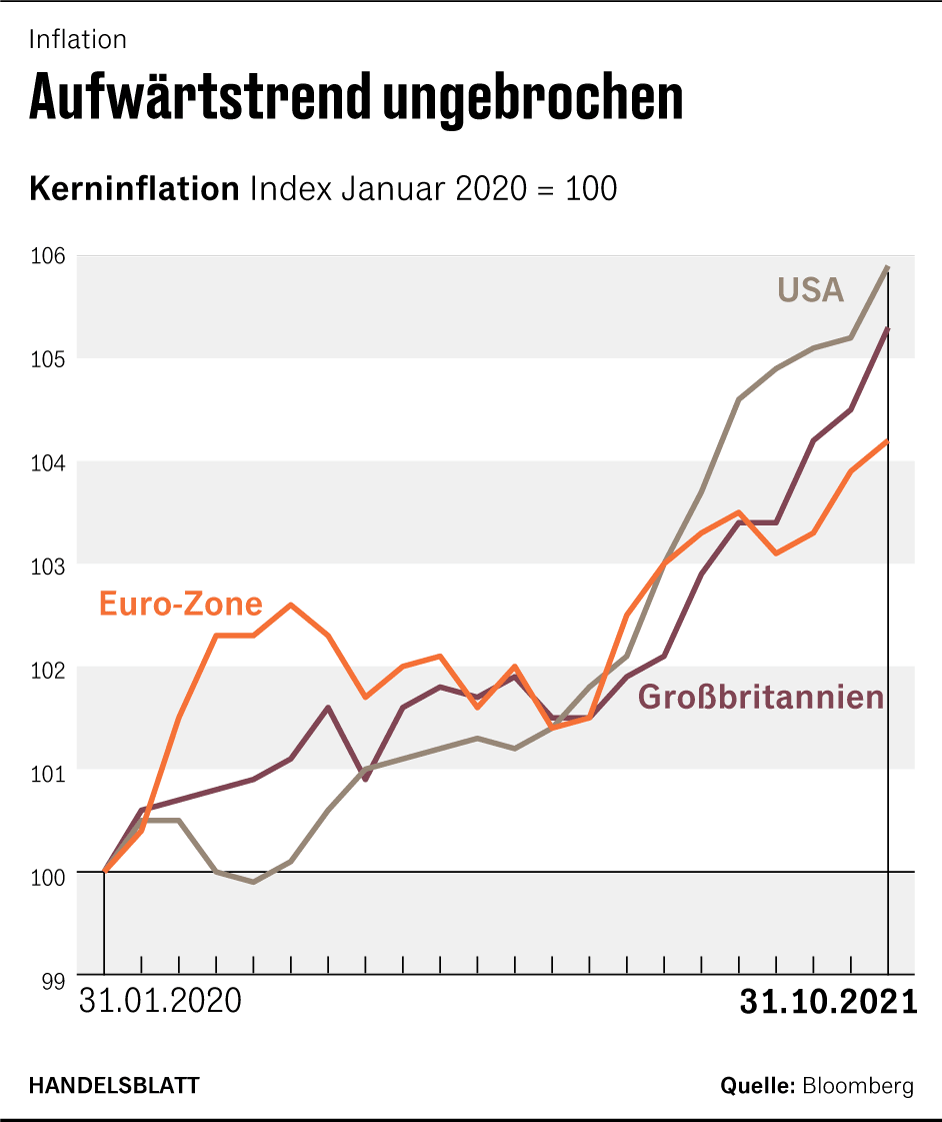 “Punitive tariffs tend to increase domestic prices,” recently admitted US Treasury Secretary Janet Yellen. This is an old insight among economists: If there is no competitive pressure from abroad, importers and, in the end, consumers pay higher prices too. The Bundesbank already warned in January 2020 that the punitive tariffs still imposed on imports from China by the then US President Donald Trump would drive up inflation in the USA. Washing machine prices, for example, rose by around twelve percent in the United States. And around two thirds of Chinese imports into the USA are still subject to punitive tariffs of up to 25 percent.

Looking at the trade war between the US and China is also worthwhile in the fight against inflation because it affects many intermediate products and durable goods. And it is precisely for these goods that the delivery bottlenecks and price jumps are greatest, according to calculations by the BIS economists. Which also has to do with the fact that the demand for durable consumer goods has increased significantly more than, for example, for consumer-related services.

The connection between inflation and trade barriers for Great Britain is somewhat more indirect. The British exit from the EU has already left supermarket shelves empty on the islands. The trade conflict with the EU over Northern Ireland now threatens to worsen the situation. New trade distortions “could exacerbate existing supply shortages and create lasting inflationary pressures,” said Jagjit Chadha, director of the National Institute of Economic and Social Research (NIESR) in London.

In the EU, home-made trade restrictions play a much smaller role in the development of inflation than in the USA and Great Britain. Nevertheless, the ECB cannot permanently decouple itself from the convoy of the major central banks should a change of course in monetary policy be initiated in Washington and London. It is therefore also in the European interest to reduce international price pressure through pragmatic trade facilitation. The ministerial meeting of the World Trade Organization (WTO), which starts next weekend, offers an opportunity to do so.

A popular crypto strategist and trader; Polkadot (DOT), The Sandbox (SAND) and shared a map of the levels at which...