Berlin Germany’s companies are desperately looking for trainees, they have never been so scarce. But just in the IT professions, where skilled workers are particularly rare, there are more applicants than apprenticeships.

The situation in the “software developer” profession is particularly striking: At the start of the 2022/23 training year, there were 199 applicants for every 100 apprenticeships, as the chairwoman of the Federal Employment Agency, Andrea Nahles, explained. However, the total number of training places available in all information technology (IT) trades is well below demand: there were only 18,500 places for 20,700 applicants.

This is in marked contrast to the overall trend: there were almost 70,000 unfilled apprenticeship positions across all professions. And it contradicts the record shortage of IT workers: According to a survey by the industry association Bitkom, there is currently a lack of 137,000 IT specialists in the private sector alone.

Despite the shortage of skilled workers, there are still too few training positions in IT

Bitkom President Achim Berg had already called for 10,000 additional training places in the Handelsblatt two years ago. “One can certainly expect larger companies – with IT departments of around ten employees or more – to train more,” he warned shortly before an IT summit. Now he is calling again for more apprenticeships to be offered.

But how can it be that the IT professions that are crucial for digitization and the energy transition are no longer being trained, even though there are more than enough interested parties? 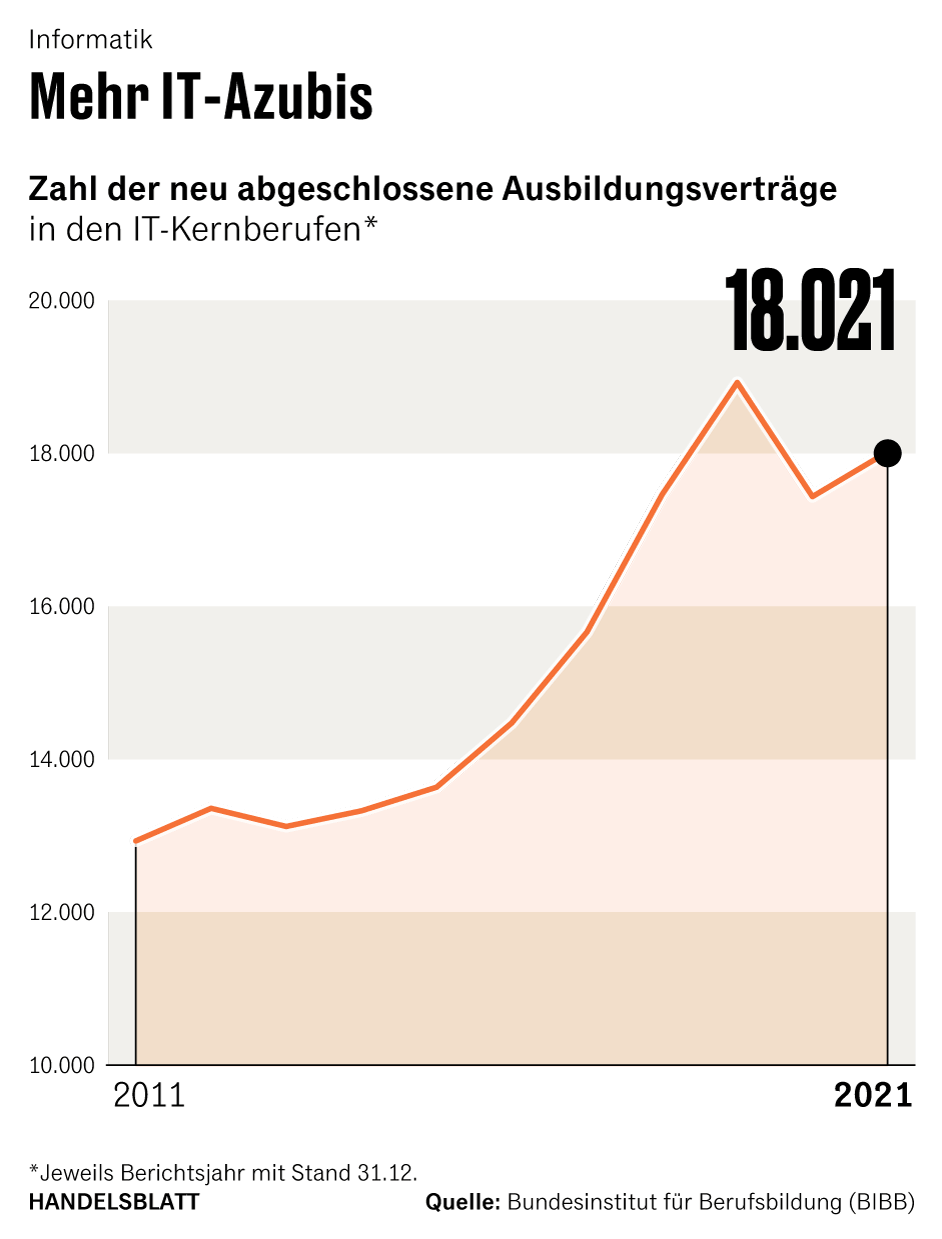 The training specialist of the Bitkom association, Leah Schrimpf, says: “The massive general shortage of skilled workers in IT naturally also reduces the training capacity: If there are no specialists, there are fewer who can invest time in training. This can quickly become a vicious circle, especially for smaller companies.”

IT industry should train more

In addition, start-ups in particular, which are often particularly sought-after employers for young people, often struggled on many fronts when building up the company. Dual training is often “not right at the top of the agenda”. In addition, the recently modernized IT training occupations are not as well known everywhere as would be desirable in view of the shortage, added the Bitkom expert. “And in some cases trainees in the IT sector are sought in places that are too far away from where young people live.” 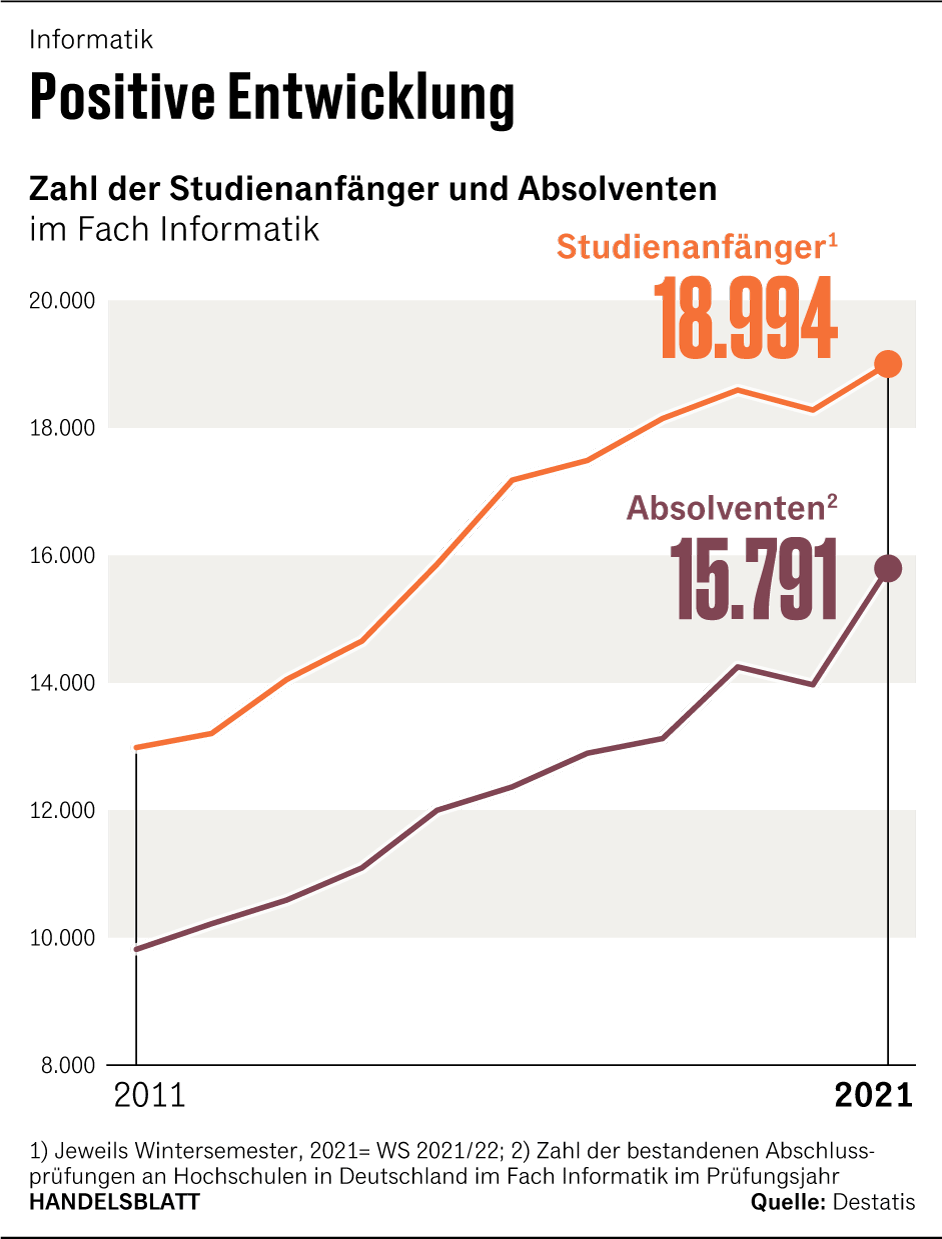 The director of the Institute for Labor Market and Vocational Research (IAB), Bernd Fitzenberger, praises the fact that the number of IT training places has increased significantly in recent years. According to the IAB, only 24 percent of companies in the information and communication sector provided training in 2020; in the economy as a whole, on the other hand, it was 29 percent.

All in all, significantly more companies could train than actually do, says Fitzenberger. In addition to school leavers, there is also a notable number of university dropouts who would rather do an apprenticeship. In order to use the potential, however, small and medium-sized companies in particular would have to increase the number of training places they offer.

>> Read here: On average, companies have to wait seven months before they can fill an open IT specialist position

Bitkom President Berg also explains the overhang of applicants by saying that not every applicant has the necessary prerequisites for training in the demanding IT professions. Companies were often looking for IT graduates, especially for software development.

However, even a group like Volkswagen does not necessarily require a high school diploma for training as an IT specialist. All that is required there is “a good high school diploma with a focus on mathematics and computer science,” says the VW website.

However, IT focuses are rare at German schools. Not only the Bitkom association, but also the advisors to the Ministers of Education are pushing for computer science to be a compulsory subject. After all, it is “no secret that we are lagging behind internationally in the digital sector,” says its chairman Olaf Köller.

As long as IT apprenticeships are scarce, the Bitkom President will promote other professions in which digital skills are also increasingly needed. Because there are already far fewer applicants than jobs there, for example in areas such as automation or energy technology, says Berg.

More: How to convince in an interview