Berlin The coalition parties and the Union have cleared the way for the planned citizens’ allowance. Both sides reached an agreement on the disputed issues regarding the planned social reform. “It’s a viable compromise,” said Katja Mast, First Parliamentary Secretary of the SPD parliamentary group, on Tuesday. The Mediation Committee will discuss this on Wednesday.

According to information from coalition circles, the controversial so-called waiting period should be reduced from two years to one year. During this time, recipients of citizen income do not have to touch their private assets to a certain extent. The waiting period also applies to investments for old-age provision or real estate up to a certain size.

The so-called protective assets, the amount of which was a main criticism of the Union, will be reduced. Instead of the originally planned EUR 60,000 for the applicant, EUR 40,000 should not be touched during the waiting period of one year. For each additional person in the household, it is 15,000 instead of 30,000 euros.

The old-age provision of the self-employed, for example, should be fully protected. The shortening of the waiting period is also justified by the traffic light with the fact that 40 percent of benefit recipients leave the basic security after a maximum of one year.

The question of sanctions for breaches of duty by benefit recipients was also controversial. The Union had criticized that only very small cuts in benefits should be possible in the planned six-month period of trust. Here, the parliamentary groups are now proposing a graduated procedure to the mediation committee – from the beginning of the benefit receipt.

controversy over the reform

According to this, the job centers should be able to reduce benefits by ten percent for one month at the first breach of duty. The second rule violation is 20 percent for two months, the third 30 percent for three months. According to a ruling by the Federal Constitutional Court, benefit cuts of more than 30 percent are excluded. 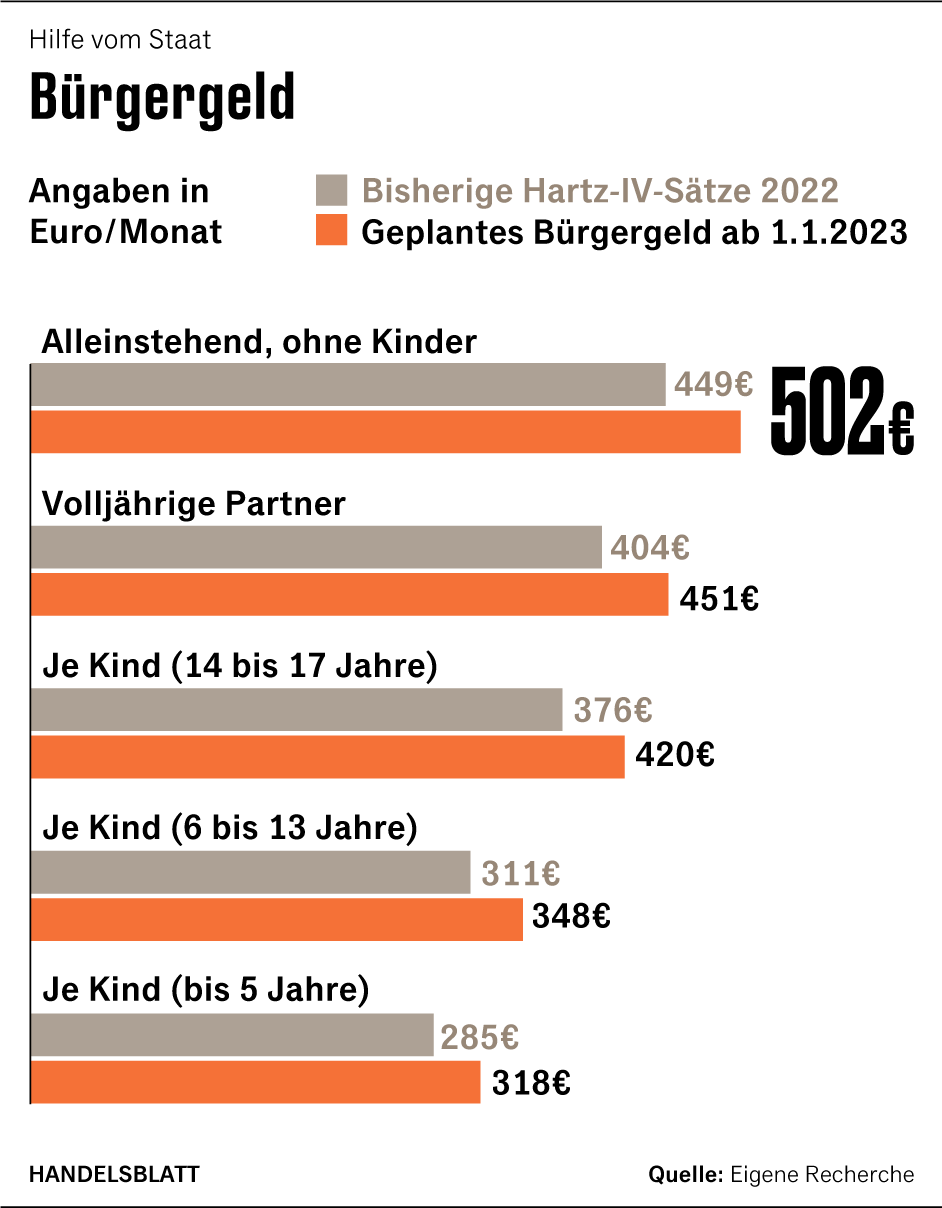 The countries with Union participation had stopped the citizens’ income law introduced by Labor Minister Hubertus Heil (SPD) in the Bundesrat. CDU leader Friedrich Merz and other Union politicians had emphasized that the aspect of “demanding” was neglected compared to “supporting”. The dispute between the traffic light and the Union faction was bitter – up to fake news allegations.

If the Mediation Committee agrees on the compromise proposal that has now been reached, the Bundestag and Bundesrat can finally discuss the law this week. According to the Federal Employment Agency (BA), the legislative process must be completed in November if essential parts of the citizen’s income are to come into force on January 1, 2023 as planned. This applies, for example, to the planned increase in the standard rates, which are to be raised from the current 449 euros per month to 502 euros for single people.

Union politicians satisfied with the compromise

Traffic light and Union had agreed around one o’clock on Tuesday night. With the informal talks, the federal and state negotiators wanted to ensure that the mediation process could be completed quickly on Wednesday evening. It was “very tough talks,” as it was said.

The specialist politicians of the Union faction were satisfied. “There is a very good chance that the mediation committee will decide on a good result on Wednesday,” said parliamentary group leader Hermann Gröhe (CDU). There were “fundamental flaws” in the traffic light coalition’s draft, which have now been removed. “If the Mediation Committee decides on Wednesday as advised, then the trust period is completely over.”

>> Read here: Why the citizen income reform could lead to higher salaries for civil servants

The CSU labor market expert Stephan Stracke also welcomed the compromise: “The spirit of the unconditional basic income is securely corked in the bottle again,” he said. There is “the possibility of sanctions from the first day”. Gröhe and Stracke emphasized that the Union faction had negotiated as one. “If that should happen, then you can say: The Union has prevailed,” said Stracke.

Green party leader Britta Hasselmann emphasized that polarization is not the order of the day. Especially in the current crisis, it is important that politicians “develop a clear signal of support and empowerment and empathy for the people affected” with the social reform, the increase in the standard rate and many other measures.

Employer President Rainer Dulger welcomed the compromise. In this way, the tried and tested principle of promoting and demanding in labor market policy could be given more attention again. The left and social organizations, on the other hand, criticized that not much was left of the traffic light’s announcement that it wanted to overcome Hartz IV.

“The measly improvements in protective assets, sanctions and forced relocations did not survive the mediation committee,” said Linken boss Janine Wissler. Not only the Union is responsible for this, but “it was publicly flanked by the FDP”.

More: The Federal Council does not agree to citizen money – what is the problem and how to proceed

Dusseldorf Consolidation continues on the German stock market. The Dax closes 0.6 percent lower at 14,447 points on Monday. There...