The federal government is looking for revenue to be able to finance the relief of the citizens. In Italy, the post-fascist head of government Giorgia Meloni is acting cautiously to prevent investors from fleeing Italian government bonds.

What do both countries have in common? Their national budgets are suffering from the turn to rising interest rates. The profits that their national central banks used to pay out are falling or non-existent.

This does not only apply to the EU. The British Treasury Secretary has to pay the Bank of England (BoE) eleven billion pounds (12.6 billion euros) to cover losses on government bonds. In the USA, the Federal Reserve made a whopping profit of over 100 billion dollars last year. For the past two months, it has been suffering billions of dollars in losses every week.

The turnaround is due to the turnaround in interest rates. For several years, the Fed, BoE and the central banks belonging to the euro system have bought trillions in government bonds as part of their extremely expansionary monetary policy. They carry a low interest rate and fall in price accordingly when market interest rates rise. At the same time, the monetary watchdogs had pumped huge amounts of cheap money into the banking system, which is now flowing back and being parked at the central banks at the increased interest on deposits.

Provisions have to be made for both – bond and interest rate risk – and that weighs on the result.

Bundesbank has not reported any profits for two years

The Bundesbank and the Nederlandsche Bank have not reported a profit for two years because they have taken a large number of precautions. Alexander Kriwoluzky, head of macroeconomics at the German Institute for Economic Research, expects this problem to persist for another two to three years. It would get worse if the European Central Bank (ECB) started selling bonds to shrink its balance sheet: then losses would have to be realized immediately.

Ignazio Angeloni, who was previously responsible for financial market stability and supervision at the ECB, advocates decoupling the interest rate on deposits at the ECB from that on lending to banks: “If the difference between the market interest rate and the deposit rate increases, the banks have an incentive to from ECB deposits to securities, thereby reducing the ECB’s balance sheet.”

Banque de France and Banco de España continued to pay dividends in 2020 and 2021. The Banca d’Italia shot the bird off, which calculated a profit of 5.9 billion euros this year, which it distributed almost completely to the Italian state. 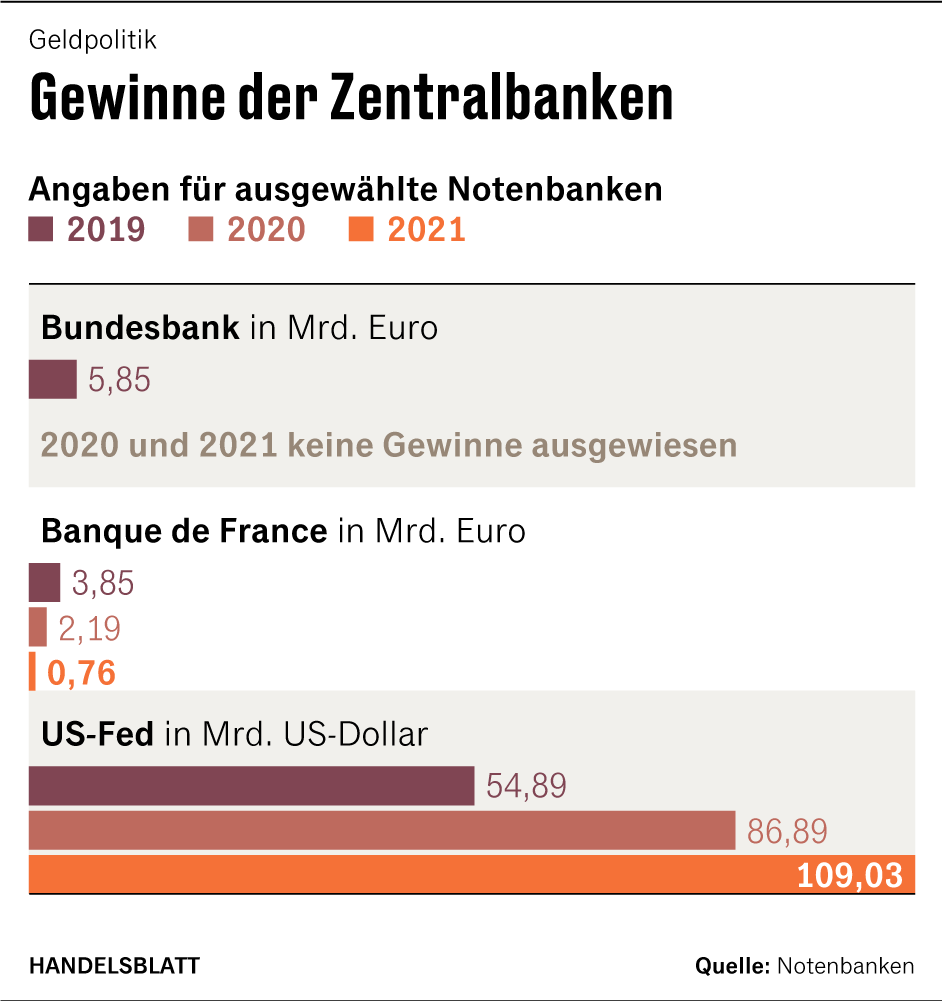 The Bundesbank speaks of a “perverted balance sheet”: it suffers particularly from the low yields on its assets – government bonds – and high expenditure on liabilities, i.e. bank deposits. “Others, such as the Italian central bank, have it a little easier. It earns interest on its government bond portfolio,” states Professor Volker Wieland from the Institute for Monetary and Financial Stability at the University of Frankfurt.

That is an irony of history: Nobody has warned against an ultra-loose monetary policy as intensively as the Bundesbank, but it is precisely this bank that has to pick up the tab because the gap between interest rates on assets and liabilities is particularly large.

Even if the Banca d’Italia is doing better than the Bundesbank in terms of income, it lives on a smoking volcano. Your bond portfolio has already lost a lot of its value. Should Prime Minister Meloni mess with the EU and pursue an unsound financial policy, the Italian risk premium would go through the roof. The EU would then have to protect Italy from a financial crisis. But who in the EU would want to save the head of a post-fascist government?

And the ECB is only allowed to support countries that “pursue a solid and sustainable financial and economic policy,” emphasizes the Bundesbank. At some point the excesses of the past will take revenge.

More: Billions in losses are becoming a reputational risk for central banks

According to the documents revealed by Bloomberg, the company that Alameda Research invested the most before the bankruptcy, bitcoin The...