Dependence on China for semiconductors threatens

Berlin Just a few months ago, Olaf Scholz (SPD), then and now Vice Chancellor and possibly head of government in the future, was full of praise for the amendment to the Climate Protection Act: It was right to specify and tighten the climate targets, said Scholz at the beginning of May when the draft was presented for the revision of the law.

And Environment Minister Svenja Schulze (SPD) was delighted at the same opportunity that there is now a “sound framework” for the path to climate neutrality. The “target structure” of the law creates more planning security.

But today it looks as if the potential coalition partners SPD, FDP and Greens wanted to defuse the law in a key area. The essence of the law, which the grand coalition passed in 2019 and amended in May, is to impose annual emission reduction obligations on sectors relevant to climate protection by 2030.

The sectors affected are industry, transport, buildings, agriculture and waste management. There is an exception for the energy industry: an ambitious target has been set for 2030; there are only interim targets until 2022.

If a sector fails to meet the reduction target for one year, the responsible ministry has to set up an emergency program within tight deadlines in order to catch up on the target as soon as possible.

The exploratory paper that the SPD, Greens and FDP agreed on at the end of last week breaks with this system. “We will check compliance with the climate targets on the basis of a cross-sectoral (…) multi-year overall calculation,” it says.

Farewell to the “illusion of planability”

Experts welcome this. “When it comes to climate protection, it is not important to achieve every annual target for a sector at any cost, but rather the overall target,” said Hubertus Bardt, Managing Director of the Institute for German Economics (IW), Handelsblatt The Approach, on a cross-sectoral one and changing the multi-year view, he rates progress: “The illusion of plannability could give way to a clearer orientation towards the overall goal,” said Bardt. 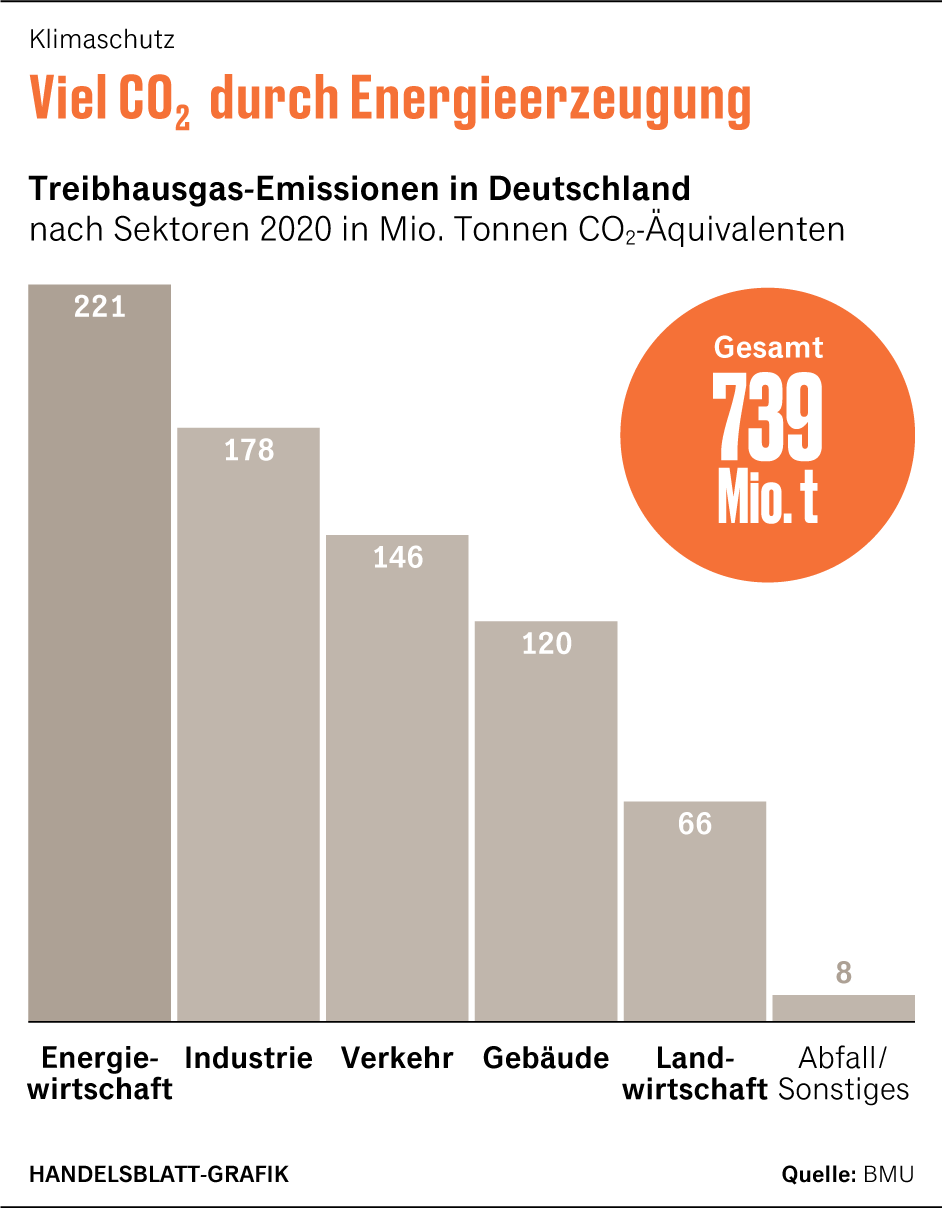 The sector and year-specific view had already been heavily criticized when the law was drafted in 2019. Leading Union politicians spoke of “pure planned economy”. The criticism has not died down in the past few weeks either.

In an interview with the Handelsblatt newspaper, Veronika Grimm, for example, recently criticized the “rigid corset” of the Climate Protection Act and advised a rethink. “I see it very critically when you have to launch new immediate programs year after year on the basis of such a law to compensate for the failure to target. This makes climate protection particularly expensive and inefficient, ”said Grimm.

Andreas Kuhlmann, head of the German Energy Agency (Dena), had recently warned that the sector goals of the Climate Protection Act “for the years 2021, 2022 and 2023 will almost certainly not be achievable”. The new federal government must be aware of this.

“It makes no sense to pass a coalition agreement that is supposed to bring new momentum and then to take immediate sector-specific measures again next spring,” said Kuhlmann.

A few weeks ago, the law had its full effect in a sector for the first time: After the expert council set up by the federal government for climate issues had confirmed that the climate protection targets for 2020 in the building sector were not being achieved, the responsible business and interior departments were forced to accept to launch an immediate program worth six billion euros.

In its assessment, the expert council came to the devastating result that the immediate program was inadequate. The council decided at the end of August that it was not even possible to quantify the effects of the emergency program transmitted by the ministries in a methodologically consistent, isolated manner.

Achieving climate protection goals is not just a question of money and goodwill. The year-to-year target fulfillment sometimes also reaches its practical limits. This applies at least to areas in which emission reductions cannot be decided at the stroke of a pen and individual measures only have a measurable effect after a delay of several years. In the building sector, there is also the fact that renovations often cannot be carried out because the craftsmen are simply missing.

In addition, the year-by-year view forces permanent investments in increasing the efficiency of expiring technology paths – although climate-neutral processes may be available within a few years. This aspect is particularly important in the industrial sector.

The Greens and the SPD are likely to have problems explaining the determination from the exploratory paper to their base. In the past, the leaders of both parties had always emphasized the value of the binding targets for each individual year.

More: Lindner cannot rely on the Ministry of Finance

China President Xi Jinping The Chinese president had already stressed the importance of the technology industry for his country on...