Ever since there have been surveys and studies on the status of digitization in Germany, the results have been frustratingly similar: the fourth largest economy in the world is lagging behind in the fourth industrial revolution. At least as frustrating is the fact that the experts’ recommendations for these devastating results are always the same: The topic of digitization must be made a “top priority” in Germany.

The fact that German managers are creating new hopes for progress has to do with two things in particular: digitization takes up a lot of space in the coalition agreement and is dealt with before climate protection. At the same time, and this is also shown by the new survey, the citizens see the FDP as the engine of a digitization push initiated by politics.

Although the Free Democrat Volker Wissing wants to bundle the topic in the newly tailored Ministry for Digital Affairs and Transport, there can hardly be any talk of a new start. You have to know that digitization in Germany is only making slow progress, mainly because there is no good will in this country, but there is a lack of a well thought-out plan. This has not changed under red-yellow-green so far. On the contrary: the jumble of responsibilities has not diminished, but actually increased. “Digital chaos reigns”, is the result of a Handelsblatt research.

Digital expert Meissner also admits that this is not a good omen for the digital race to catch up. For him, even after the change of government, the digital transformation still does not have the political importance it should have. And that brings us back to the boss issue.

While in France, for example, President Emmanuel Macron celebrates almost every new unicorn from the digital economy with a tweet, one also asks oneself when it comes to the most important economic topic of this century: where is Olaf Scholz? “The Federal Chancellor must be much more present on this topic,” Meissner demands. Daring to make progress alone is not enough. Then you have to move forward.

A few tweets and promises at the digital summit are not enough. What is missing is a strategy. An economist with whom at least the Social Democrats and the Greens feel close intellectual ties may be able to help: Mariana Mazzucato.

For the Italian, who teaches at University College London, it is the state that makes economic and technological progress possible in the crucial moments. In concrete terms, this means promoting digitization where it will bring tangible benefits to the largest possible number of people. Not an easy task when 80 percent of the population say they know little or nothing about the new technologies.

On the other hand, people know pretty well what’s on their minds: inflation, pensions, the pandemic and climate protection are at the top of Allensbach’s list of concerns. The correct idea of ​​Mazzucato’s “mission economy” is to use the new technologies in a targeted manner where they help to master the greatest tasks of the future. Digital efficiency in business lowers costs and prices. Care robots help in old age. Without processing huge amounts of data, we cannot develop new vaccines so quickly. Green Tech protects the climate. 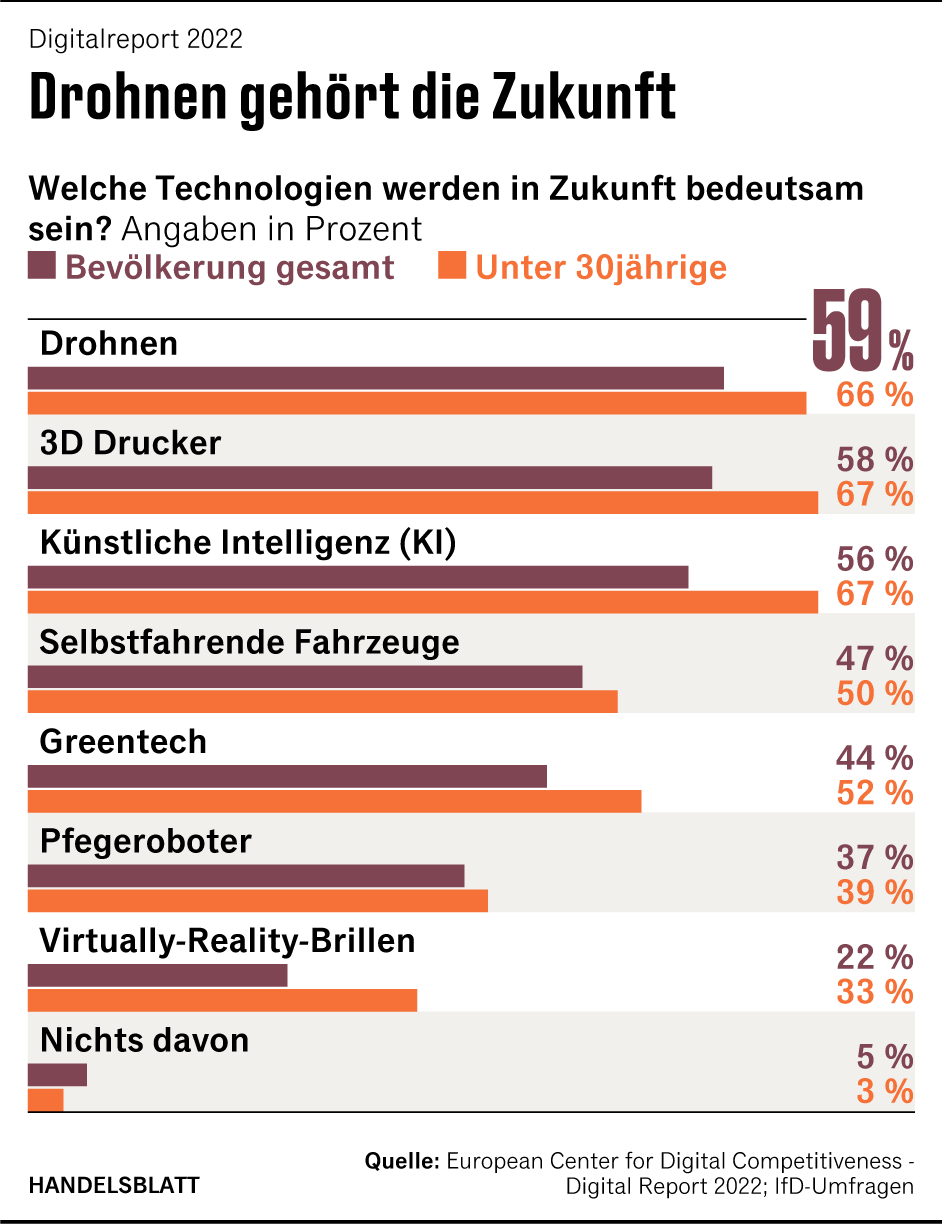 What is also interesting about the new Digital Report 2022 is that much-discussed technologies such as the next 5G mobile communications standard or the sluggish broadband expansion are not among the most important future technologies for most Germans. Drones and 3D printers are at the forefront.

Probably also because people here are much more likely to imagine the useful applications that are possible with it. Only if the traffic light government succeeds in doing this with other key technologies such as artificial intelligence can there really be a new start in digitization.