Gold May Be At These Levels Next Week!

Brussels With an investment program of up to 300 billion euros, the EU wants to promote the construction of modern infrastructure in emerging and developing countries. The project is considered to be a key EU initiative in the systemic competition with China and is the result of years of consultations between the Commission and Member States.

The strategy with the name Global Gateway is to be officially presented on Wednesday. The current version is available from the Handelsblatt. The sum is significantly higher than planned until recently and a sign of how important the EU Commission boss Ursula von der Leyen is. European companies can hope for lucrative contracts.

“Global Gateway has the potential to make the EU an effective geopolitical actor,” said German EU ambassador Michael Clauss to the Handelsblatt. The offer will “be an attractive alternative to the Chinese Silk Road for many partner countries”.

It is the declared aim of the EU to increase its global influence. Global Gateway was specially designed with a view to rivalry with authoritarian systems. The Commission makes this clear in the first sentence of its strategy document: “Strong democracies and the values ​​that underpin them must provide an answer to today’s global challenges.”

One of these challenges is outdated infrastructure: in many countries there is a lack of modern train lines and roads, power lines and fiber optic cables; Europe wants to offer itself as a partner to them.

In order to achieve the development goals of the United Nations and to create a climate-neutral world economy, the EU estimates that 1.3 trillion euros are missing per year. With the “Global Gateway” program, Europe now wants to make its contribution to narrowing this investment gap. 300 billion euros are to flow in the period between 2021 and 2027. Various programs from the EU budget are being tapped for this purpose. “It’s not just about advocating for European values, it’s also about strengthening Europe economically,” said a senior Commission official.

“The Commission has come up with an impressive figure, and that deserves recognition,” said Noah Barkin of the Rhodium Group consultancy. “The real test for Global Gateway, however, will be whether the EU can mobilize the promised funds and, in coordination with its allies, guide them into high-profile and strategically relevant projects.”

The German economy is also hoping for this: “Global Gateway is good news for all European companies that are active in the infrastructure sector,” said Frank Kehlenbach, who heads the European and foreign construction division at the Main Association of the German Construction Industry. “The EU has shied away from creating a problem for infrastructure development outside of Europe for far too long.”

The current package is the second attempt

Originally, the EU wanted to present the strategy in November. But the design at the time fell far short of the expectations that von der Leyen had previously awakened. The funding commitments amounted to just 40 billion euros, the text neither listed specific projects, nor did it formulate clear priorities. He also only hinted at the systemic conflict with China.

After the Handelsblatt reported on it, von der Leyen’s head of cabinet Björn Seibert intervened. He canceled the planned publication and requested extensive changes. Last week, Seibert invited diplomats and experts to dinner in the executive suite of the commission to discuss Global Gateway, including German EU ambassador Michael Clauss and Mikko Huotari, head of the Berlin think tank Merics, which specializes in China.

Clauss, who represented Germany in Beijing from 2013 to 2018, is one of the driving forces behind efforts in Brussels to counter China’s growing geopolitical influence. Initially, however, this goal met with considerable skepticism within the EU institutions. Because of bureaucratic defensive battles, the European infrastructure initiative was delayed by several years. The Federal Foreign Office complained in an internal memo in the spring that the implementation of the plans is proceeding “overall hesitantly”. With Global Gateway, the EU now has the chance to get off the defensive.

The new strategy could amount to a fundamental reorientation of European development policy. So far the EU has concentrated more on traditional development cooperation and neglected the strategic importance of infrastructure projects. While Europe is the world’s largest donor of development aid, it derives little political benefit from it.

The Chinese have shown how it can be done differently. Under the leadership of President Xi Jinping, China is financing the construction of ports, highways and data centers and is pushing the orders on to Chinese companies. Beijing cares little about the ecological and social consequences of the projects. There are increasing reports of corruption, exploitation and forced labor.

Until recently, China has also promoted the construction of coal-fired power plants, thereby counteracting efforts to combat climate change. In September Xi announced that he would no longer finance coal piles in the future. A step that was welcomed internationally, but it still remains to be proven whether China will keep its promise.

Beijing used the Silk Road Initiative, also known as “Belt and Road”, “to expand political influence globally, to shape global standards and norms according to its own ideas and to advance industrial policy, especially by promoting state-owned companies,” warned the Foreign Office in its memo .

There are very similar concerns in the German economy. European companies can take part in tenders for Belt and Road projects, but they usually get nothing. The Federation of German Industry (BDI) has been pointing out this competitive disadvantage for years. In addition, European companies fear losing access to the markets of countries that come into Chinese orbit and adopt the technical standards of the People’s Republic.

The main reason why the Silk Road is controversial internationally is that it is seen as an instrument to force other countries to become dependent on Beijing. Critics speak of debt diplomacy. Only a few months ago, Montenegro asked for help from the EU: The Balkan state had taken over a Chinese motorway loan. 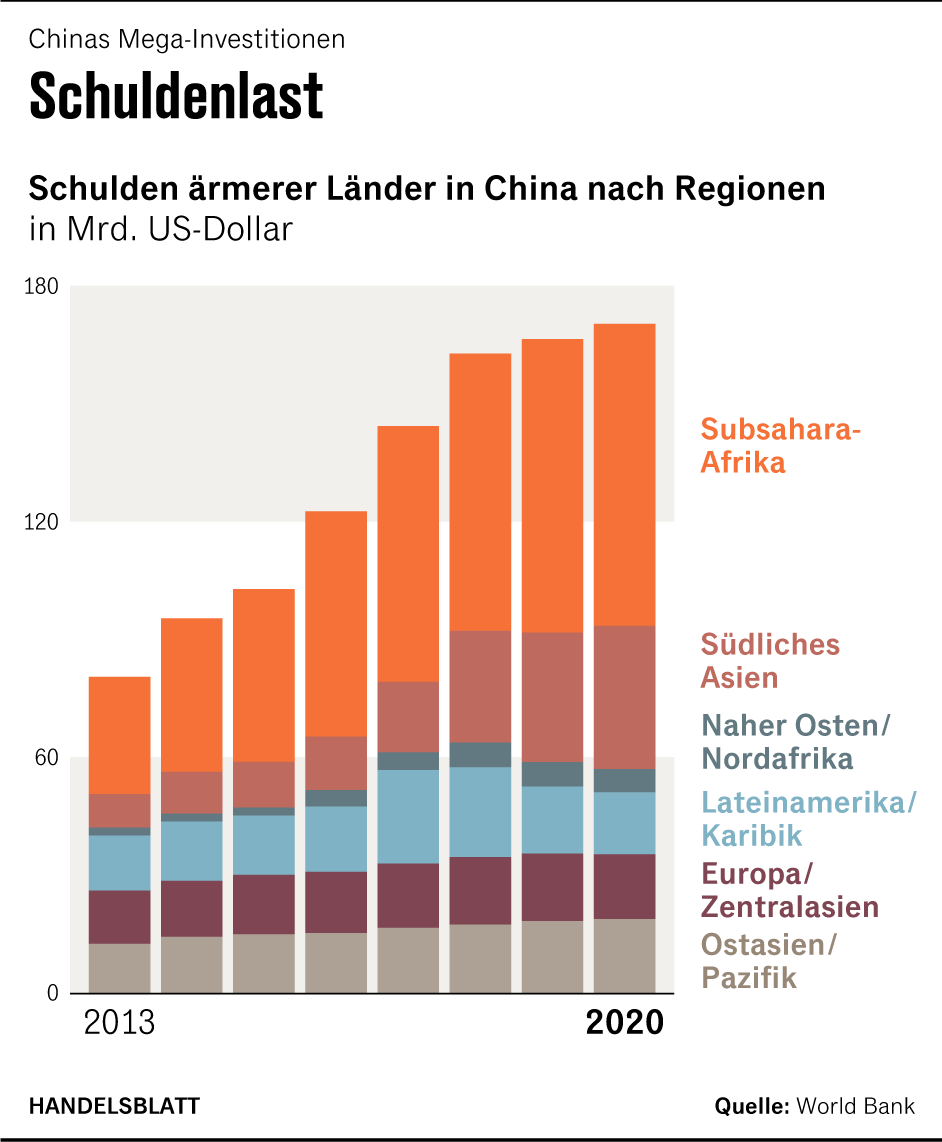 In order to clearly distinguish itself from China’s rigorous policy of interests, the Global Gateway Strategy states: “The EU will offer its financing on fair and favorable terms in order to limit the risk of payment difficulties.” The initiative aims to “connect and not create any dependencies ”. A central criterion in the allocation of funds should be the climate-friendliness of the investments.

Support comes from the member states: “It is important to provide Global Gateway with financial backing to the planned extent and to follow up with the first implementation steps quickly,” said an EU diplomat. “If that succeeds, the initiative, with its partnership-based approach, can underpin the EU’s geopolitical aspirations and reduce Chinese influence.”

The EU initiative also met with approval from the traffic light coalition. “The Commission’s proposal is a big step forward,” said Nils Schmid, foreign policy spokesman for the SPD. “Now it is crucial to back it up quickly with concrete plans. As early as next year, Global Gateway must be visible in the Balkans and in Africa with the plans to build rail and electricity networks. ”The EU must therefore concentrate on physical projects. This is exactly what the strategy envisages.

At the same time, Schmid called on the Federal Ministry of Economics to take targeted care of the involvement of German companies. The house, which will soon be run by the Greens boss Robert Habeck, will have to use the coordination office created by his predecessor Sigmar Gabriel to support strategic infrastructure projects to “enable German companies, especially small and medium-sized enterprises, to participate in Global Gateway”.

In addition to the EU, Japan, the USA and Great Britain have also recognized the importance of a strategic infrastructure policy. When it comes to implementation, they are in some cases well ahead of the Europeans.

The US government plans to name up to ten lighthouse projects as early as January. In the summer, President Joe Biden swore the G7 countries to his “Build Back Better World” plan – a common Western alternative to the Silk Road. The EU now wants to build on this: Global Gateway should “be dovetailed with the work started within the framework of the G7 and mutually reinforce one another with initiatives such as Build Back Better World”, writes the Commission in its strategy.

More: The relationship between China and Africa is clouding over

The gold market surprised this week with a break above $1,830. Analysts say that next week will be crucial if...