An Unbelievable Detail Discovered in a 46-Year-Old Mars Photo

Airplane Mode on Phones Becomes History! Here’s Why Behind It?

Why more and more hairdressers, bakers or cafés are giving up

Contact primary care provider? If the gas or electricity supplier terminates the contract

Tips from four HR managers on leadership in a crisis

Unexpected: USA May Trigger The Decline Of Cryptocurrencies!

This Altcoin Is Dumping On The Exchanges! – Cryptokoin.com

The best Android apps and games of 2022 have been announced!

Home office jobs are booming in these German cities

The oil price cap can do something that other sanctions cannot

Investment Giant Warns of This Bitcoin Exchange: It May Sell Coins! – Cryptokoin.com

A New Artificial Intelligence That Responds Better Than Google

Frankfurt/Main ECB President Christine Lagarde has reaffirmed the central bank’s determination to fight record high inflation. “We assume that we will continue to raise interest rates,” Lagarde said on Friday at the Frankfurt European Banking Congress. “Ultimately, we will raise rates to a level that brings inflation back to our medium-term target in a timely manner.”

The European Central Bank is aiming for price stability in the euro area in the medium term with an inflation rate of two percent. In the euro area, consumer prices in October were 10.6 percent higher than in the same month last year. In Europe’s largest economy, Germany, the inflation rate rose to 10.4 percent in October.

“Inflation in the euro area is far too high,” Lagarde said in Frankfurt. In addition, the risk of a recession has increased, although the latest data on growth in gross domestic product have surprised on the upside.

After a long period of hesitation, the ECB has been trying to get the extremely high inflation under control by raising interest rates sharply since July. The key interest rate in the euro area, which was frozen at a record low of zero percent for years, is now 2.0 percent.

“Interest rates are and will remain the most important tool for adjusting our policy course. But we also need to normalize our other policy instruments, thereby increasing the momentum of our interest rate policy,” said Lagarde.

The ECB’s balance sheet, which has swollen over the years as a result of billions in securities purchases, must be normalized “moderately” and “in a predictable manner”. “In December we will set out the main principles for reducing the bond holdings in our purchase program,” Lagarde announced. The Governing Council will meet again on December 15th. 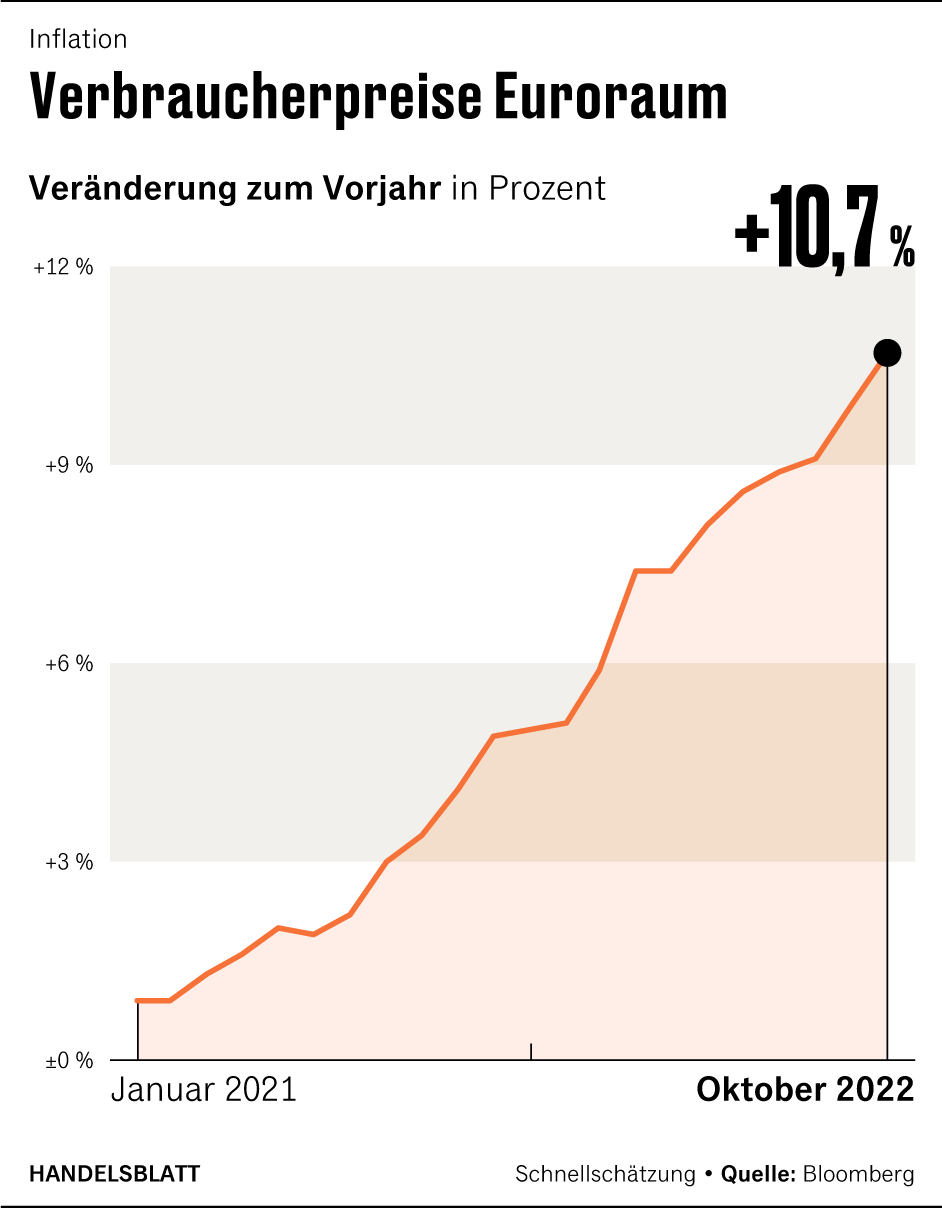 Deutsche Bank boss Christian Sewing spoke at the banking congress about the financial challenges for the next few years. An efficient capital market is urgently needed for this. “We need a 2030 Agenda for Europe. And the very first step must be that we finally create a real European home market,” said Sewing. “Unfortunately, given the lack of political will or lack of unity in the EU, even at best, it will take many years to complete the Capital Markets Union.”

The capital markets union is essentially about removing bureaucratic hurdles between the individual EU countries in order to give companies more opportunities to raise money. The EU Commission’s plans for a capital markets union have been on the table since September 2015, but implementation is faltering.

Without a significant increase in private sector investment, Europe cannot be competitive, Sewing warned. “We will neither master the sustainable transformation nor be able to keep up technologically,” said Sewing. “That’s why it’s so important to finally push ahead with the capital markets union in order to create a liquid and attractive market for domestic and foreign investors,” warned the Deutsche Bank boss.

“Europe’s strategic autonomy is not possible without strong banks that can support the economy in all situations with full force – and that are competitive on a global level,” affirmed Sewing, who is also President of the Association of German Banks. “It is becoming increasingly clear that the current regulatory framework is doing little to strengthen European banks.” Regulation in Europe must be readjusted.

In the images taken by Viking 1, the exploration vehicle that first landed on Mars, it was discovered that there...

Airplane Mode on Phones Becomes History! Here’s Why Behind It?

Why more and more hairdressers, bakers or cafés are giving up