The decision was made yesterday evening: Federal Chancellor Olaf Scholz wants to deliver Leopard 2 main battle tanks to Ukraine. As the “Spiegel” first reported, it is about at least 14 vehicles. Other countries are also allowed to sell Leopards made in Germany to Kyiv. According to US media, the US government is also ready to provide Ukraine with Abrams-type main battle tanks.

Why Scholz’s long tactics and hesitation, only to deliver in the end? Two readings are possible. Either the chancellor is in fact the shrewd strategist his political friends think he is.

When everyone demanded that he finally explain himself, he publicly remained silent and made it clear in a confidential phone call to US President Joe Biden: German leopards only exist if American Abrams roll to the front. Blood pressure rose temporarily in the White House – and then they complied. According to the Wall Street Journal, it was the convinced transatlantic Biden himself who ignored the concerns of his military, according to the motto: the main thing is that the Germans get involved.

The other reading: Scholz was not a clever actor, but a driven one. Under pressure from the left wing of the SPD and a German public divided on this issue, he kept setting new conditions for Leopard deliveries: at first only in accordance with other allies. Then only if the USA also delivers.

When nothing else helped, on Friday they resorted to the bureaucratic sleight of hand of the “test order” to evaluate whether tanks were available at all. The arsenal of excuses was only exhausted when Poland applied to the federal government yesterday to be allowed to deliver its German-made Leopards to the Ukraine.

Even if you lean towards variant one – Scholz, the master strategist – you have to ask the questions: Was the hesitation worth the price? How much political capital has it cost us from our allies, particularly in Eastern Europe? Has respect for Scholz increased in Washington because he wrested a concession from the superpower USA? Or do you clench your fist in your pocket and swear: We won’t let the Germans get away with such a stunt again?

For now, none of this matters. What matters now is that the Leopards and other western main battle tanks get to the front quickly, in relevant numbers, with sufficient ammunition and spare parts and well-trained Ukrainian crews. Only then can they still play a role in the expected spring offensives of both warring parties. According to the FDP defense expert Marcus Faber, the details of spare parts packages and the training of the Ukrainian soldiers should be a topic in the defense committee today.

We have known for many years that Ukraine – like Russia – is a fairly corrupt country. This does nothing to change the Ukrainian people’s right to self-determination or the criminal character of the Russian war of aggression.

Ukrainian President Volodymyr Zelenskiy has now responded to suspected cases of corruption with a series of dismissals. A total of four deputy ministers, the deputy presidential administration, governors and employees in various authorities, offices and the public prosecutor’s office have lost their jobs. Several suspects are in custody. The allegations of corruption became known over the weekend.

The software group Microsoft earned significantly less at the end of the year in view of high inflation and fears of a recession. In the three months to the end of December, net profit fell by 12 percent year-on-year to $16.4 billion (15.1 billion euros), as the computer company announced on Tuesday after the US stock market closed.

Microsoft’s revenues rose 2 percent to $52.7 billion – the weakest growth in more than six years. Overall, however, the quarterly figures were in line with expectations, and revenue from the cloud business was even slightly higher than expected. The stock gained around 4 percent in after-hours trading.

Microsoft announced last week that it would lay off around 10,000 employees. At the same time, the group wants to expand its commitment to the developer of the popular AI software ChatGPT, OpenAI, with a “multi-billion” investment. 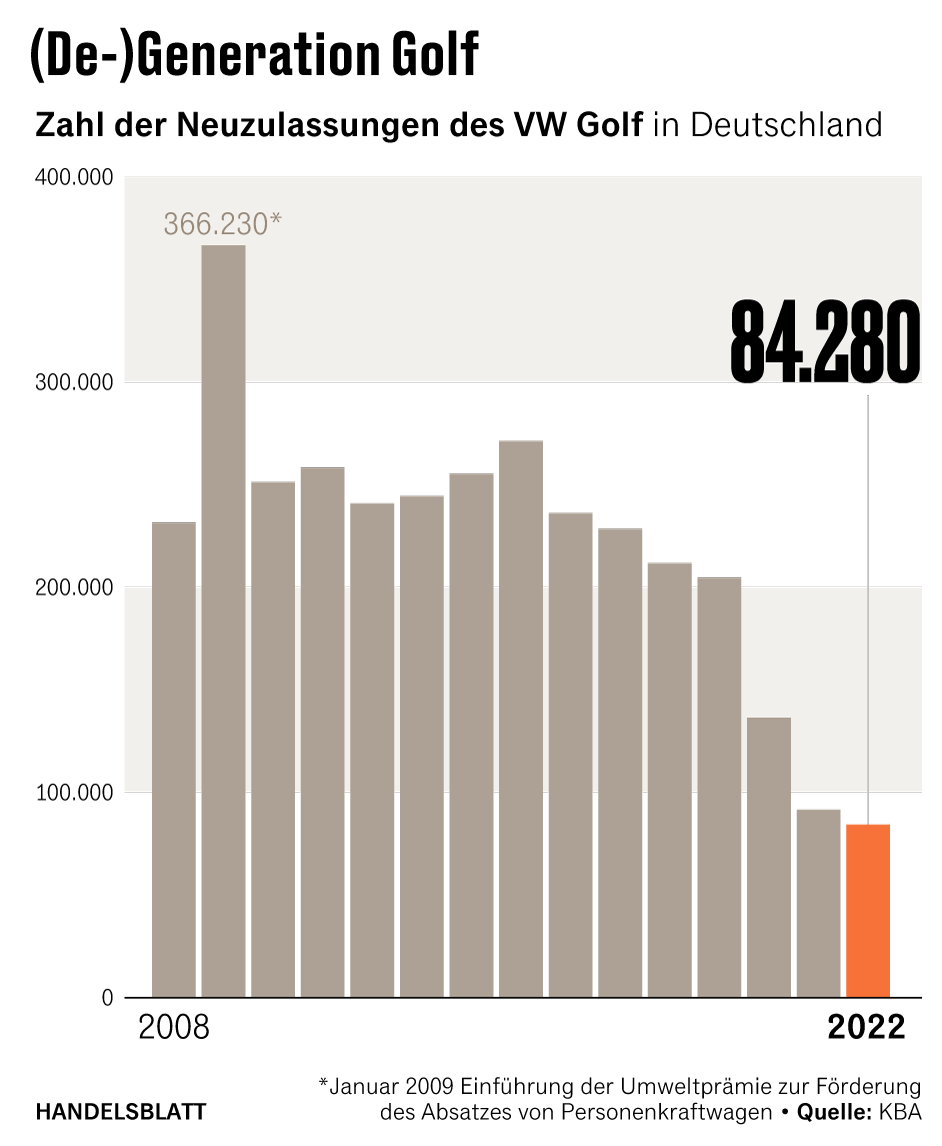 The Golf not only gave a name to an entire generation, it also stands for everything that Germany once was and at some point no longer wanted to be: practical, solid, inconspicuous. A car like the mid-terrace house in the suburbs or the beige Wellensteyn windbreaker. In terms of registration numbers, the Golf is still the most popular car among Germans. But the trend points downwards. First, the trend towards jacked-up SUVs made life difficult for the average German car, then the switch to electromobility also came along.

Now the Golf should experience a renaissance as an electric car, VW CEO Oliver Blume revealed in an interview with the Handelsblatt: “We are working on it. There are already inspiring suggestions.”

In order to distinguish the E variants from the combustion engines, the Golf and its SUV offshoot will – according to everything you hear from the group – be sorted into VW’s electric ID series and named ID.Golf or ID.Tiguan come to market. A more powerful GTI variant is also planned. According to Blume, the project is currently in the concept and design phase.

The ID.3 was originally intended to be VW’s electric Golf successor. In the meantime, people in Wolfsburg no longer want to know anything about that. “The ID.3 is not an electric Golf and should never become one,” says a high-ranking manager. An icon of mediocrity is not so easy to clone.

I wish you a day when you can do without a beige windbreaker.