How Habeck and Lindner are preparing for the government

What Should Gold Investors Expect Now?

Dusseldorf The world of the stock market is divided into two parts: in the USA, investors continue to rely on rising prices, while in Germany both the willingness to invest and the future expectations of investors have plummeted. This is shown by the data of the current Handelsblatt survey Dax Sentiment on the one hand and various US indicators on the other.

This divergence can be explained by the corona pandemic. On the other side of the Atlantic, the fourth corona wave has already broken, and the numbers there are sharply declining. In Europe, on the other hand, the topic has clearly come to the fore again in recent days.

In the medium term, however, the negative effects on the stock exchanges should also be limited in Europe. Therefore, after evaluating the current survey, sentiment expert Stephan Heibel sticks to his assessment of the past week: Setbacks in the Dax, like last Friday, are an opportunity to buy and not a cause for concern.

On Friday, the Dax slipped by around 200 points after six record highs in a row. Apparently, the announced lockdown in Austria, coupled with the usual price fluctuations on the expiry date, was the cause. Options on indices and individual stocks expired on Friday and were settled. On such days, investors try to move prices in a direction that is favorable to them.

But why should this reset not have any further consequences? For a few weeks there have been no so-called inconsistencies in the Handelsblatt survey, i.e. contradicting extreme values ​​that would have to be resolved by a violent correction. On the contrary: Heibel had derived a healthy continuation of the rising prices from the data, albeit losing momentum.

In the opinion of the sentiment expert, the stock market is now entering the next rally phase. Because one important indicator has changed: future expectations, which were rosy a few weeks ago, are fading.

In Heibel’s view, this will soon lead to the following result: “In disbelief, many investors then look after the prices, which I believe will soon rise again.” 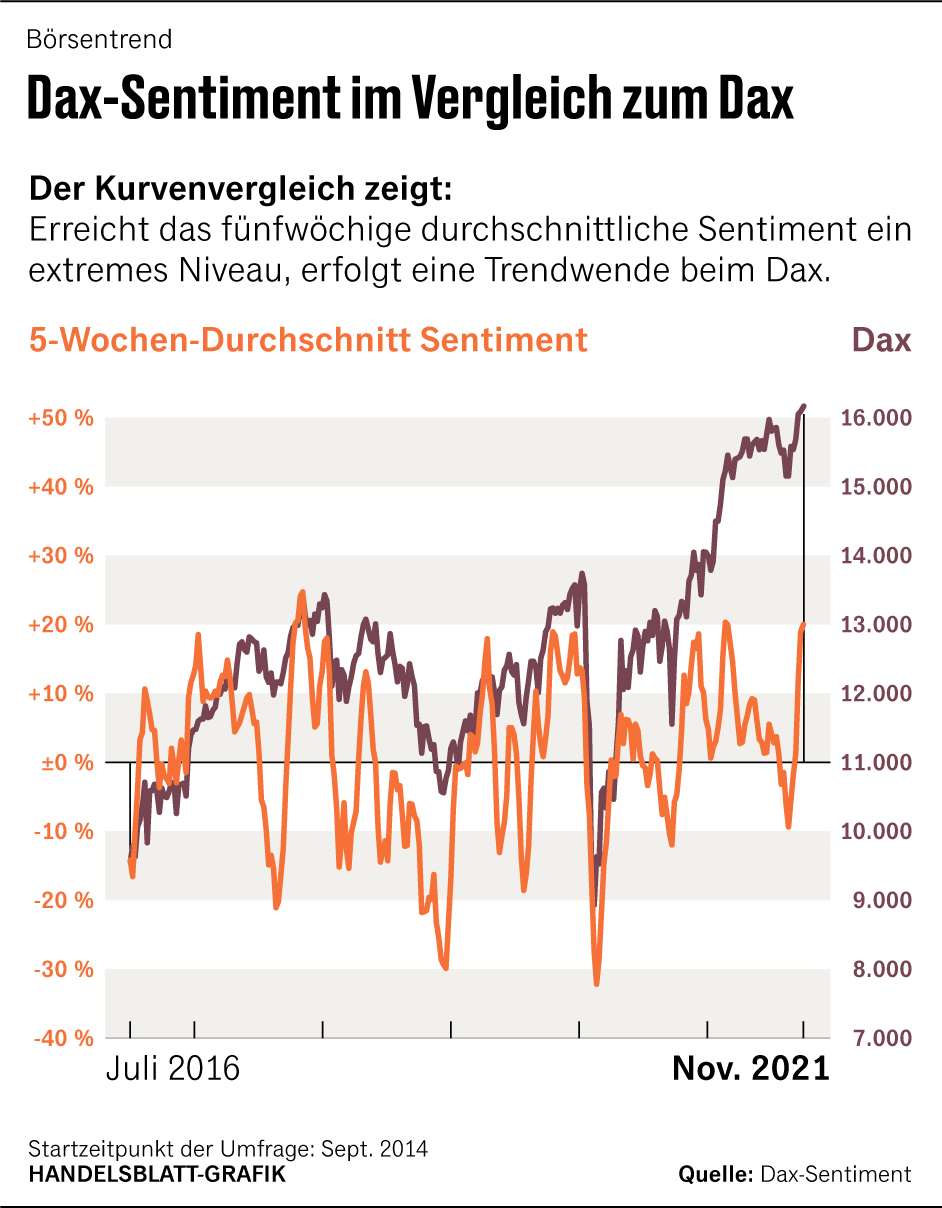 But there are also warnings. The five-week sentiment (see chart), which always allows a good medium-term assessment of the state of the stock market, has reached an extreme value. In the past, such values ​​often heralded the end of the stock market party. This indicator was at a similarly high level, for example, at the end of January last year, a few weeks before the corona crash.

According to Heibel, the record low for this indicator as a result of the Corona crash in March 2020 is not yet offset by a corresponding record high. Therefore, this five-week average of investor sentiment still has some room for improvement.

Nevertheless, investors should take note of this extreme value and adjust their positioning accordingly. Anyone who has been fully invested so far should reap a few profits at the current price level. “A little cash for bargain purchases in the event of extensive consolidation can’t hurt,” says Heibel.

Sentiment in other asset classes

The exchange rate of the euro against the dollar has slipped below its long-term support at $ 1.15 and is currently trading at just 1.1280. Both investor sentiment and future expectations on the currency market are correspondingly bad. Both sentiment indicators are trading in extreme areas, at the same time there is a great willingness to buy at the current level. The chances are good that the euro will approach its support again in the short term, but this time from the bottom up.

The gold price is increasing, the mood too. But there is still no euphoria on the gold market, and other sentiment values ​​are not yet in the extreme range for the yellow precious metal. So the increase can continue.

It looks very different on the oil market off: After the rally was not continued, the mood also collapsed. Future expectations are at their lowest level in the past twelve months. The consolidation on the oil market is therefore likely to continue a little longer.

Bitcoin disciples are a species of their own and the market has yet to learn to deal with them. Although Bitcoin has plummeted in the past few days, expectations for the future remain at a high level. Sure, the mood is clouding over, but there can be no question of panic. In other asset classes, panic is an indicator of a trend reversal in the market, i.e. for prices to rise again soon.

And complacency is spreading. The value of 3.5 shows that many investors had expected the record hunt and are now enjoying their success.

However, the future expectation has collapsed to a value of minus one. Throughout October the bulls outnumbered and optimism for the future reached record highs. In just three weeks, that optimism has now completely disappeared. In parallel to the optimism, the willingness to invest has also decreased to a value of only 0.2.

The Euwax sentiment of private investors has fallen to minus eleven and shows a strong propensity to hedge. The greater the negative value, the more put products, which increase in value when prices fall, are in the custody accounts of private investors compared to call derivatives. In this way, investors secure their book profits from the past few days and weeks.

The put / call ratio on the Chicago futures exchange, on the other hand, continues to show that investors are strongly bullish. And so it is hardly surprising that the US fund managers have kept their investment ratio at 103 percent. Investors bought shares on credit, keeping the quota above 100 percent.

US private investors have a bull / bear ratio of twelve percent, the bulls dominate in the US. Although the bear camp has grown by 15 percentage points compared to the previous week, unlike in Germany, the bulls in the USA still clearly have the upper hand.

The “fear and greed indicator” of the US markets, calculated on the basis of technical market data, stands on the threshold of extreme greed with a value of 74 percent.

There are two assumptions behind surveys such as the Dax Sentiment with more than 6,000 participants: If many investors are optimistic, they have already invested. Then there are only a few left who could still buy and thus drive prices up. Conversely, if investors are pessimistic, the majority of them have not invested. Then only a few can sell and thus depress prices.

Would you like to take part in the survey? Then you will be automatically informed about the start of the sentiment survey and sign up for the Dax Sentiment newsletter. The survey starts every Friday morning and ends on Sunday noon.

More: How investors are deceived with pseudo green investments.

Berlin The relationship between finance ministers and economics ministers has traditionally been difficult. Olaf Scholz (SPD) and Peter Altmaier (CDU)...

What Should Gold Investors Expect Now?