Non-Earth Minerals Discovered in a Meteorite

Trendyol Announced the Amount of Savings in November Discount

Achieving Many Firsts, What Did Kodak Do Wrong?

Saarbrucken The SPD won the state elections in Saarland by a landslide. According to the 6 p.m. forecasts from ARD and ZDF, she and her top candidate Anke Rehlinger were well ahead of the CDU, which had previously ruled under Prime Minister Tobias Hans. The Union suffered a historic defeat on Sunday.

According to the ARD and ZDF forecasts, the Social Democrats will get 43 to 44 percent of the votes and the Christian Democrats 27.5. AfD, Greens and FDP have to worry about entering the state parliament because their results fluctuate around the 5 percent hurdle. The AfD reaches 5.5 percent.

According to the forecasts, the Greens are 5.5 to 6 percent, the Free Democrats 4.8 to 5.0 percent. The left is likely to miss the entry into the state parliament with 2.5 to 2.7 percent.

This marks a change in the office of head of government: the previous deputy head of government, the 45-year-old Minister for Economic Affairs Rehlinger, now has a good chance of becoming prime minister. Your SPD was recently the smaller partner in a grand coalition with the CDU. “The Saarland has voted red,” Rehlinger said after the first forecast became known to her supporters.

Saarland was firmly in the hands of the CDU for around 23 years: First Minister President Peter Müller was at the helm, followed by Prime Minister Annegret Kramp-Karrenbauer in 2011 and since March 2018 her successor Hans has been in charge.

With the overwhelming triumph of the top candidate and deputy chairwoman Anke Rehlinger in Saarland, Chancellor Olaf Scholz’s party impressively passed the first mood test after the federal election. The Union, which has had to come to terms with its new opposition role for a little over 100 days, remains on the losing side.

Even if only a good one percent of the slightly more than 60 million eligible voters in Germany live in Saarland, the election result is a signal for the federal government. The extent to which federal politics played a role in the voting decision of the Saarlanders is uncertain. If so, then it should have had a rather positive effect on the SPD.

Chancellor Scholz and his traffic light government dropped in the polls after the federal election. Since the start of the Ukraine war, however, at least the SPD and the Greens have been on the up again. In times of crisis, governing parties find it easier and easier to score points.

Chancellor Scholz’s about-face in foreign and security policy is well received. And the relief package decided shortly before the election to compensate for the high energy prices should have done the rest.

With Rehlinger, the SPD will again have more prime ministers nationwide than the Union, namely eight. So far it was seven to seven between the CDU/CSU and SPD. There are also Winfried Kretschmann from the Greens in Baden-Württemberg and Bodo Ramelow from the Left in Thuringia. 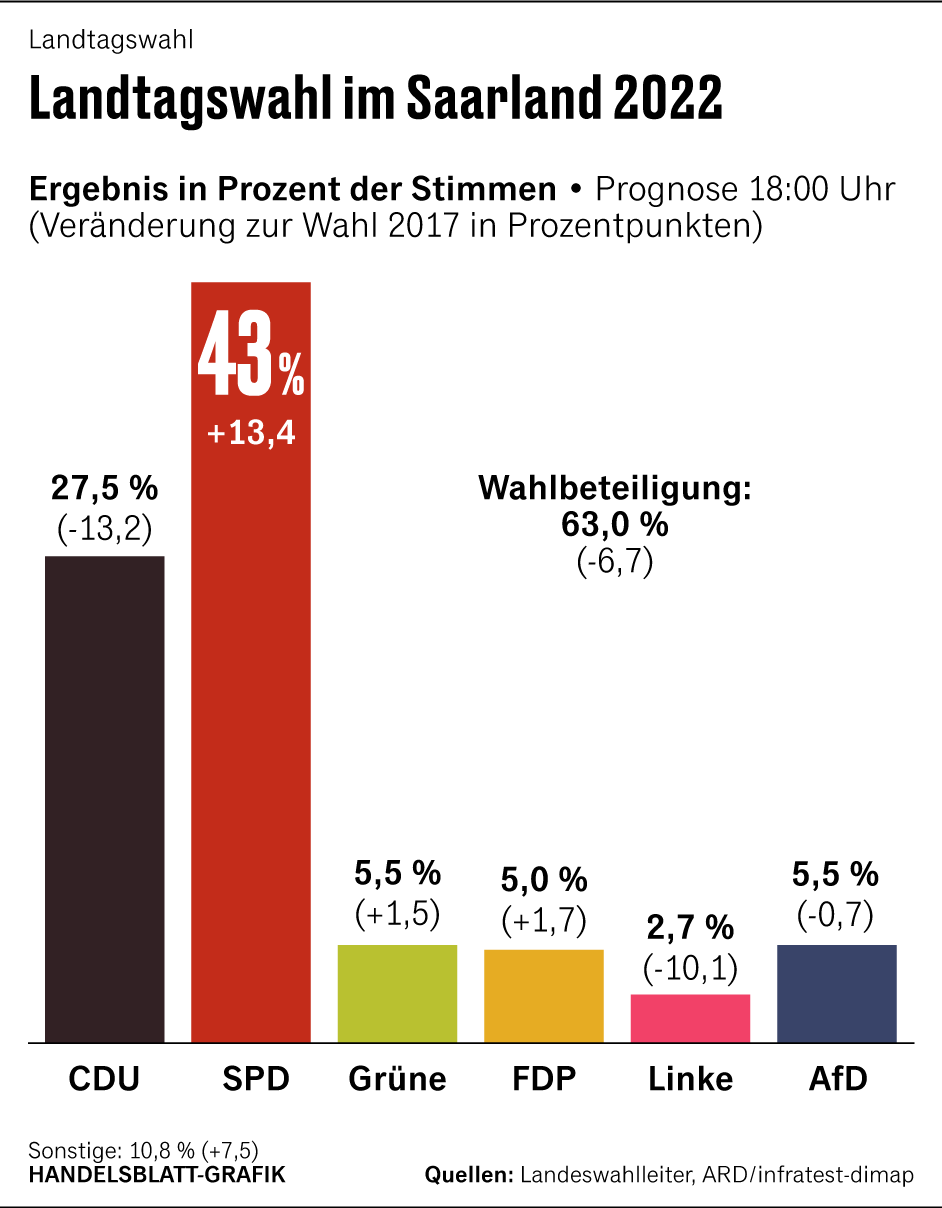 Berlin is now watching with excitement who Rehlinger will govern with. During the election campaign, she showed sympathy for a grand coalition with the CDU under new leadership. According to the first forecasts, all possible constellations were conceivable on Sunday – from an SPD sole government via red-green and traffic lights with the FDP to an alliance with the CDU.

>>Read here: All developments on the Saarland election in the news blog

More than 750,000 citizens were called upon to decide on the composition of the parliament in Germany’s smallest area.

The election campaign was initially dominated by corona issues such as easing or the facility-related compulsory vaccination. After the start of the Ukraine war, security policy and high energy and fuel prices became the top issues.

More: The Saarland election will be the first mood test for Friedrich Merz

That brings the day at the World CupEverything is at stake for the DFB-Elf on Thursday against Costa Rica. But...