Frankfurt Fears of recession, the war in Ukraine, the effects of the lockdown in China on supply chains and rising interest rates are weighing on the business of investment banks. According to figures from the data provider Refinitiv, the fee income of the banks from the business with mergers and acquisitions (M&A) as well as IPOs and bond issues in Germany have collapsed by 38 percent since the beginning of the year.

The decline was most noticeable in the equity business – i.e. IPOs and capital increases – where revenue shrank by 86 percent to $66 million after a record year in 2021. With M&A deals, the banks redeemed 35 percent less than a year ago and, at $357 million, less than six years ago. 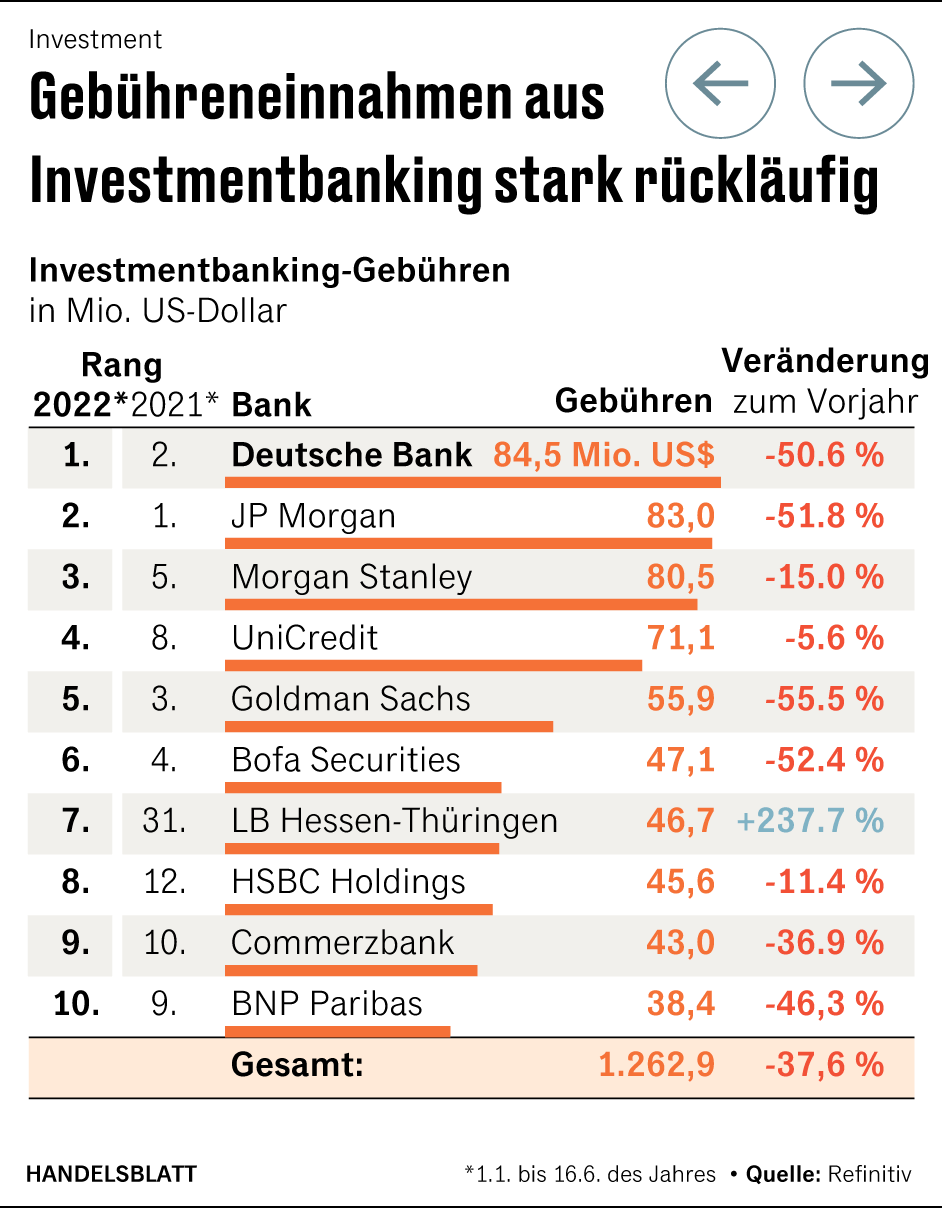 “In the meantime, the development of inflation and the macroeconomic environment that has become more difficult are the dominant topics in the M&A market,” says Tibor Kossa, co-head of M&A at Goldman Sachs in Germany. Globally, the volume of mergers and acquisitions fell by a fifth to two trillion compared to the same period last year, according to the Refinitiv figures.

Broadcom’s $60 billion purchase of VMware and Microsoft’s purchase of Activision attracted just as much attention as Elon Musk’s announcement that he would take over Twitter. In Germany, on the other hand, there were no mega deals dominating the headlines. 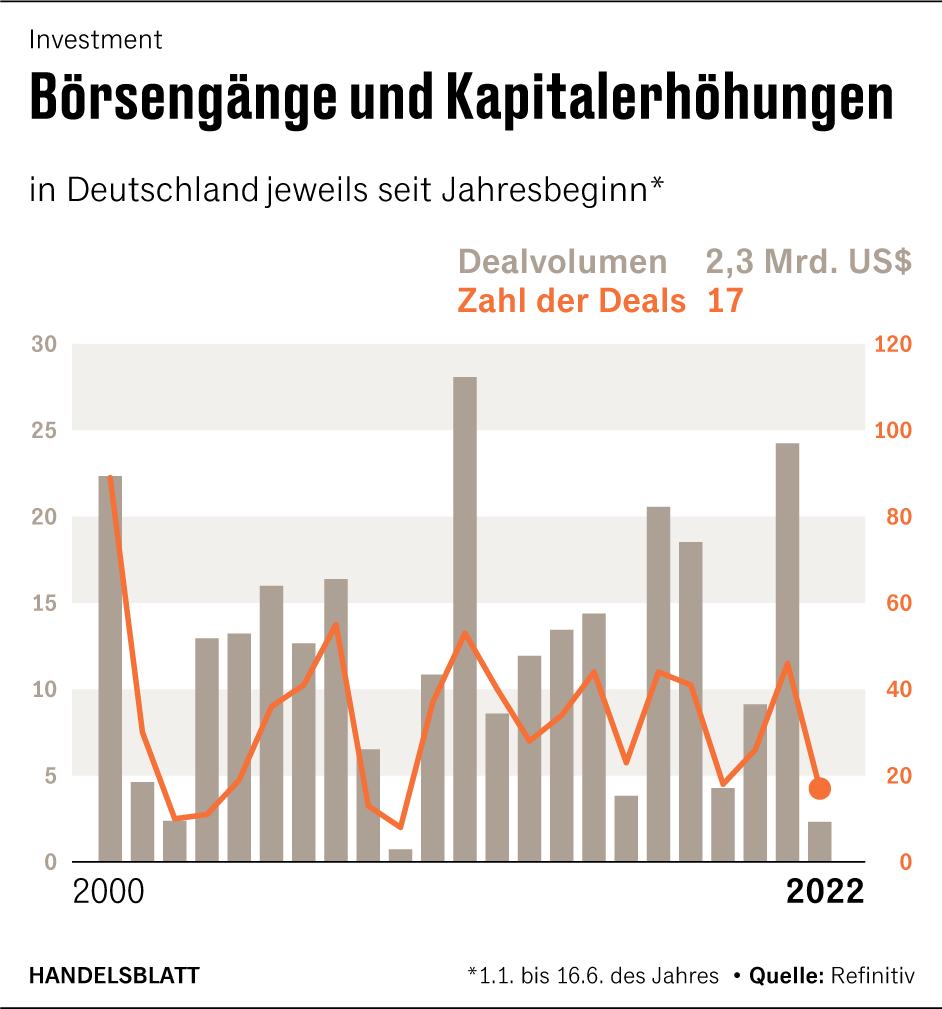 The biggest deal of the year so far is the long-awaited announcement by Siemens Energy that it will take over the Spanish wind turbine manufacturer Siemens Gamesa for $4.3 billion. A deal by Lanxess, DSM and financial investor Advent to combine plastics activities before the sale of a Bayer pest control division to the investment company Cinven came in second. 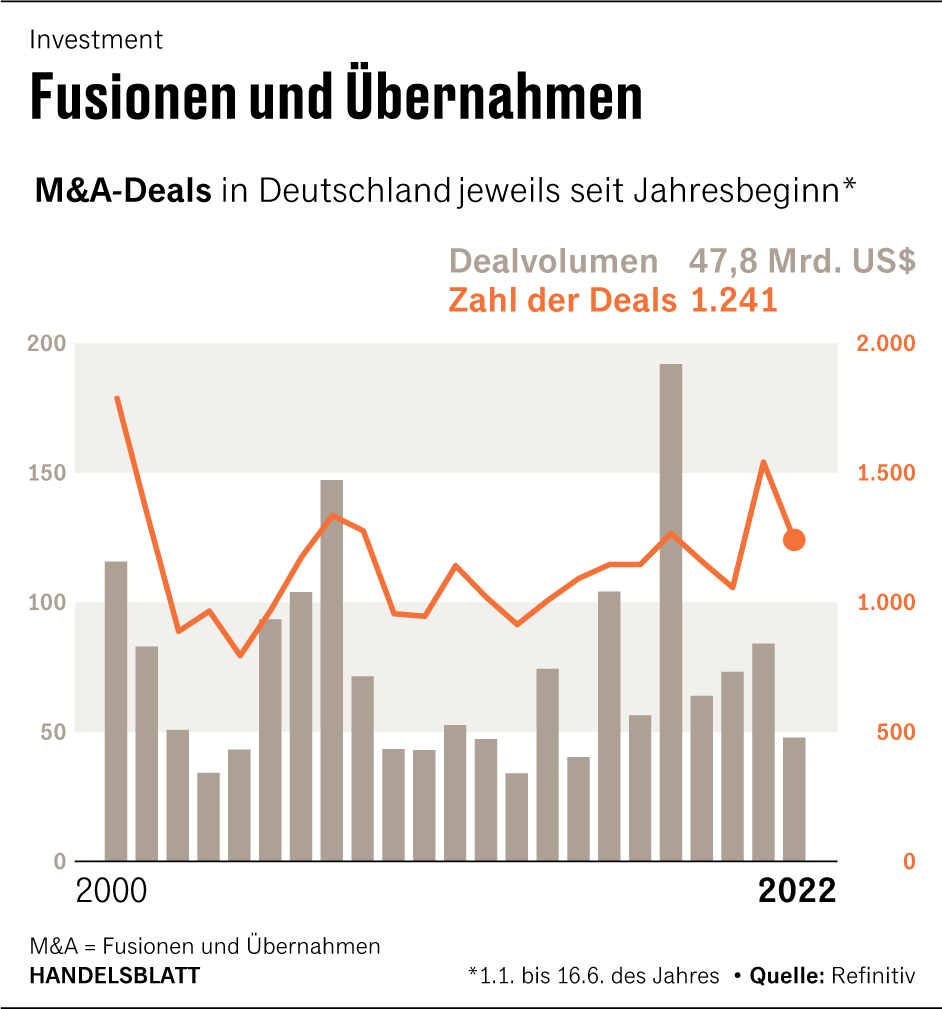 Private equity firms are playing an increasingly important role in M&A deals. Most recently, they were involved in almost every second deal across Europe. “The capital that is available to financial investors is still at record levels, so the investment pressure is considerable,” says Sven Baumann, Barclays investment bank boss in Germany. The teams of financial investors, especially for the market in German-speaking countries, have been greatly expanded. Investment bankers expect private equity to remain very active. 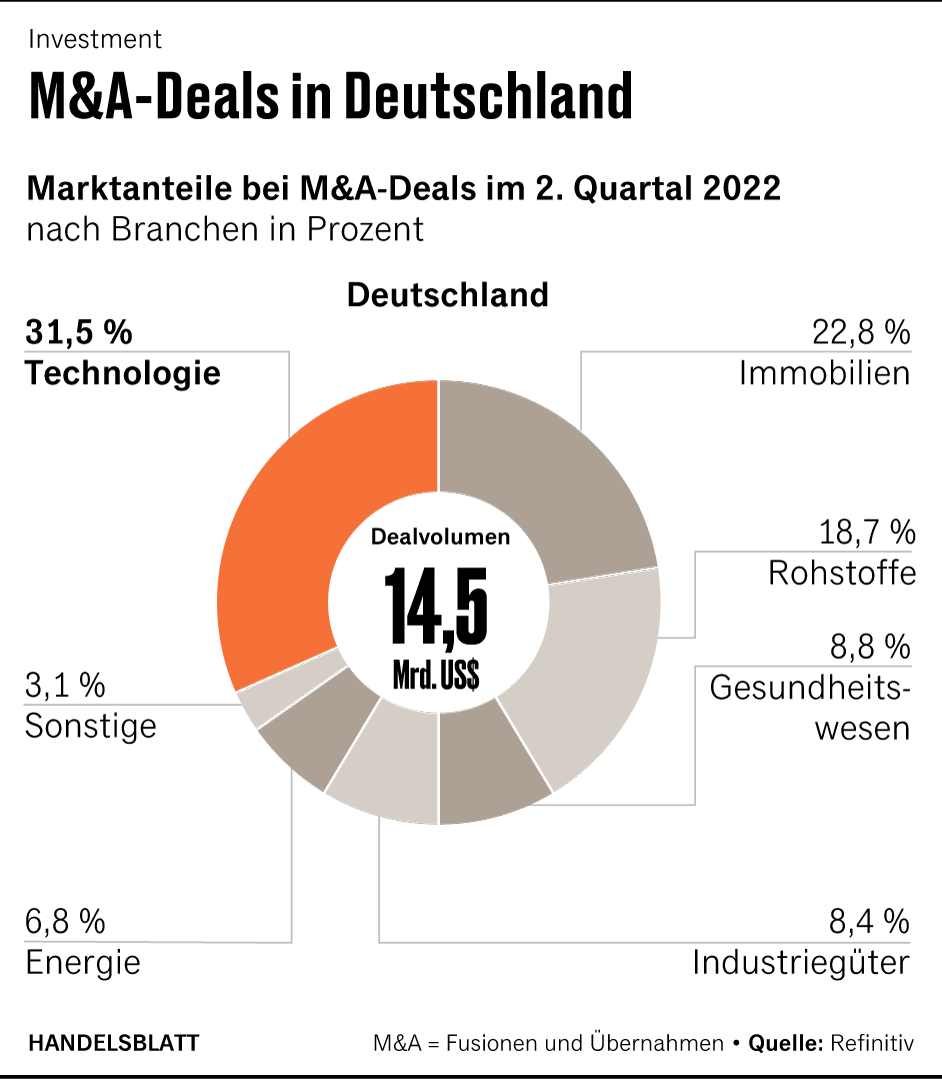 This is also because corporate leaders remain heavily concerned with positioning their portfolios and divesting themselves of peripheral areas – whether due to pressure from activist investors or to avoid offering them a target. “The trend towards more focus and more corporate clarity is unchanged and since spin-offs in particular can take place independently of the stock market environment, a number of companies are currently examining this alternative,” says Dirk Albersmeier, co-head of global M&A business at US investment bank JP Morgan. Private equity is ready to buy such parts of the company. 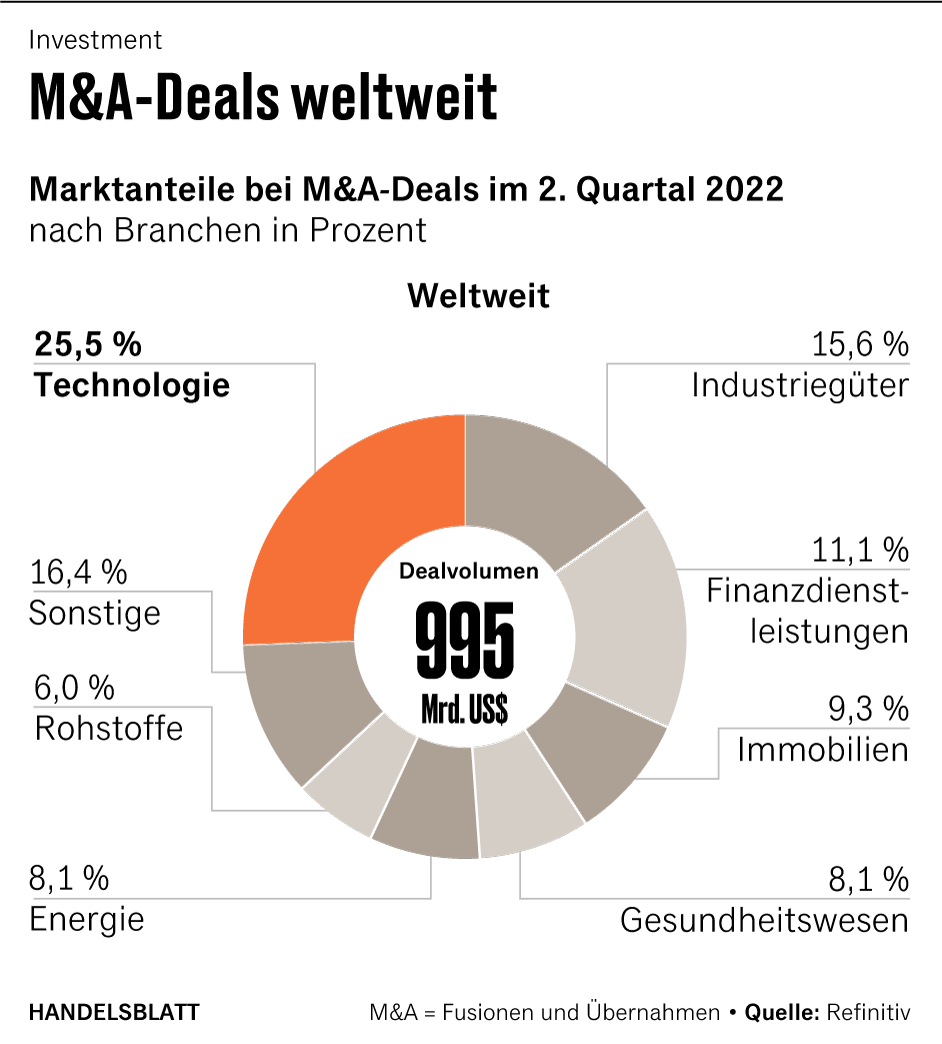 While restraint is noticeable in mergers and acquisitions, but deals continue to take place, there is a lull in IPOs. “Volatility is just too high at the moment,” says Julian Schoof, Head of Investment Banking Coverage at Deutsche Bank in Germany, Austria and Switzerland. 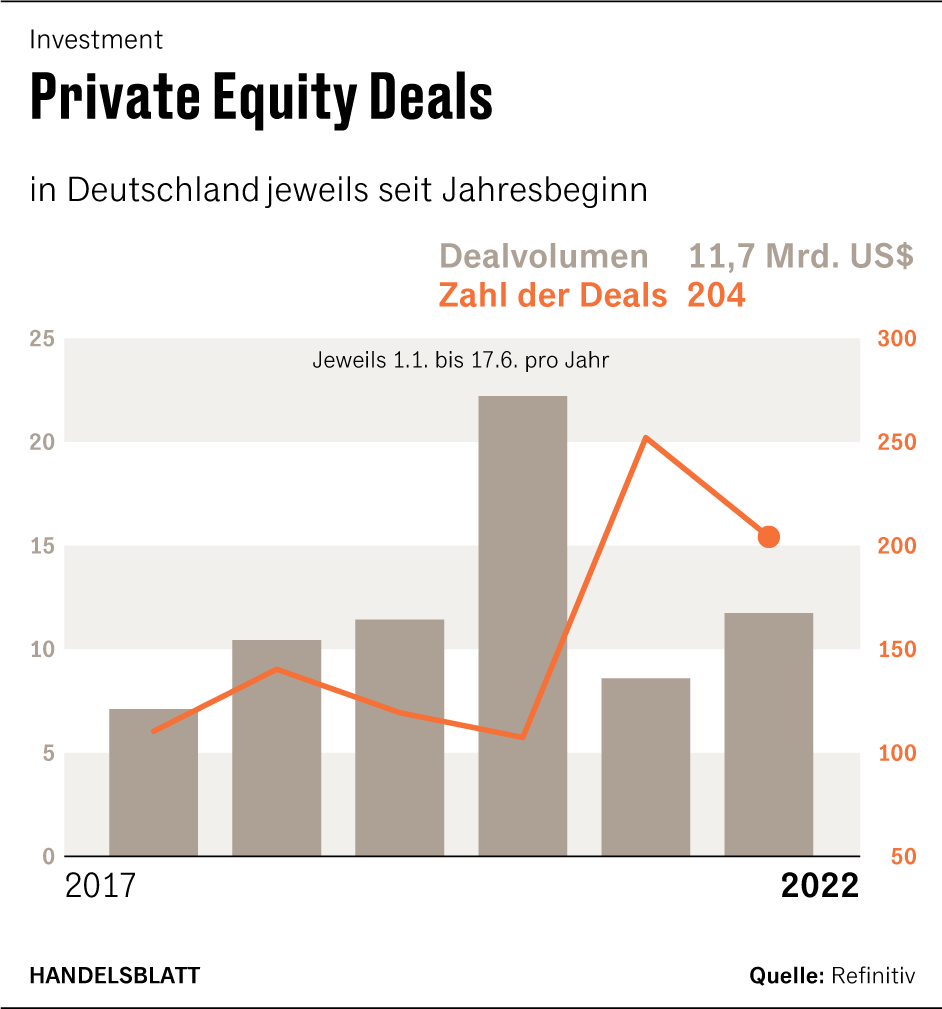 In view of the high price fluctuations on the stock markets, there has not been a single major IPO in Germany since the beginning of the year, although many larger companies were ready, such as the Parship dating portal, the Thyssen hydrogen subsidiary Nucera or the medical technology company Ottobock. In order to be able to subscribe to shares from newcomers to the stock market, investors first have to part with other values, which would only be possible with a loss in view of the price slumps. Therefore, many investors prefer to wait and see and forgo investing in IPOs.

Polish F-16 fighter jets Poland and the USA do not exclude deliveries of aircraft to Ukraine. (Photo: dpa) Kyiv, Moscow...