Dusseldorf The recent heavy losses on the German stock market are also reflected in investor sentiment: it is currently as bad as it was at the beginning of the Ukraine war. This is the result of the Handelsblatt survey Dax-Sentiment among more than 7000 private investors. “This is what panic looks like,” commented sentiment expert Stephan Heibel. He evaluates the weekly survey for the Handelsblatt.

The leading German index, the Dax, lost 4.6 percent last week. The discount to the June high of 14,709 points is almost eleven percent. Against this background, it is not surprising that sentiment, which reflects investor sentiment, has fallen to minus seven.

The mood was worse only after the start of the Russian invasion of Ukraine at the end of February. “Before that, we had to go back to the Corona crash to find such an extremely depressed mood,” says Heibel.

Accordingly, investors are unsettled. Many of them had not expected such a sell-off as recently: 70 percent of those surveyed stated that they were surprised by the price development. As a result, the uncertainty fell to minus 10.2. The uncertainty was greater at minus 12.3 most recently during the Corona crash in March 2020.

For further classification, Heibel explains: “From values ​​of minus four, we speak of extreme values. I can understand the uncertainty: neither the hesitant behavior of the European Central Bank nor the determined action of the Fed were able to calm the financial markets. The feeling of helplessness is spreading.” Because recently all shares were sold. So there were no sectors in which investors could save themselves. 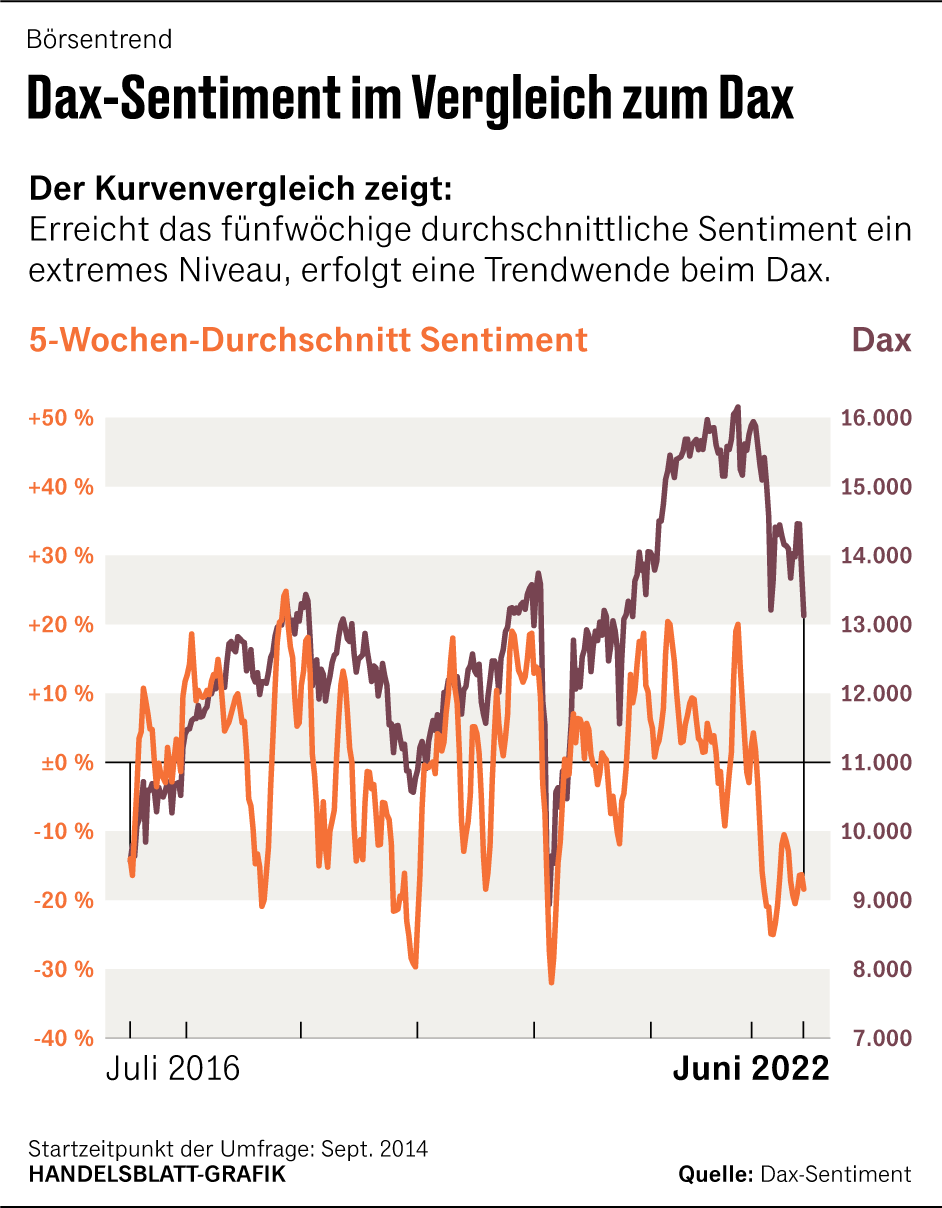 In sentiment theory, extreme values ​​in investor sentiment are actually a counter-indicator: if investors are euphoric, this is a warning signal. By then, many investors will already have invested, leaving only a few who could still buy and thus drive prices up. Conversely, panic is considered a buy signal. By then, the majority of investors have already sold, leaving only a few sellers left to push prices further down.

At the moment, however, investor sentiment is already extremely bad. Nevertheless, no reliable price base has yet emerged. There are two possible explanations for this:

However, there are now signs that the mood is improving somewhat. Expectations for the future have increased slightly, from minus one to minus 0.6. The value indicates “that many investors think the worst is over,” explains Heibel.

Accordingly, one in four respondents now states that they want to buy shares in the next two weeks. Accordingly, the willingness to invest has jumped to plus 2.2 – and thus to the highest value since the end of March. “Bargain hunters are shuffling their feet,” says Heibel, commenting on this development.

The managing director of the analysis company AnimusX also advises investors to cautiously re-enter: “Don’t put everything on one card, because the problems are really overwhelming, even I have to admit that.” But there are already a lot of shares that are extremely cheap. “In ‘normal’ stock market times, you don’t buy these stocks because they’re too expensive. Now they are cheap, sort of a bargain, so you should at least hit it with small amounts.”

This applies even if a large company slides into bankruptcy due to the high cost of raw materials and China annexes Taiwan. “That would be my current impression, only the confirmation of the worst fears,” says Heibel. And most of these have already been incorporated into the current courses.

The Euwax sentiment of the Stuttgart Stock Exchange, where private investors trade, even shows that private investors are leveraging rising prices. This means that the money used can be multiplied. The corresponding value has risen to plus three, in the previous week it was still minus 6.5. The larger the value, the greater the surplus of call options, which benefit from rising prices, compared to the share of put products, which benefit from falling prices.

The precious metal is actually considered a safe haven in times of crisis. But since its high for the year in March, the price has fallen by more than ten percent. “The price of gold is rising and not rising even though the world is in chaos. The mood on the gold market is at rock bottom,” observes Heibel.

However, the view of gold is put into perspective when you look at the annual chart: Because the price is currently at the level it was at the start of the year. It held up much better than the Dax, which lost 17 percent in the same period.

In view of the continuing great concerns about the future, however, investors expect prices to rise again soon. In connection with the recent correction and the bad mood on the market, Heibel sees this “as a good starting position for rising prices”.

The mood on the oil market is good: the price of the North Sea variety Brent has risen from 90 dollars to more than 120 dollars at its peak since the start of the Ukraine war. However, the future prospects of investors are getting worse, according to the motto: “It can’t go on like this.”

Heibel sees this as a possible sign that the oil rally is taking a breather in the meantime, but points out: “For a definitive end to the oil price rally, we need exaggerated bullish expectations in addition to euphoria.”

The Bitcoin price has fallen by a third in the past week. Investor sentiment also declined in tandem with the cryptocurrency price. “We are measuring the most extreme despondency since the Bitcoin survey began. The five-week moving average is also at its lowest level. And the future expectations for Bitcoin are also extremely negative. Here we see an image that signals fear and panic,” says Heibel.

According to the sentiment theory, such extreme values ​​are also contraindicators for Bitcoin. A bottom for the Bitcoin price would therefore be within reach. However, sentiment theory only says that a bottom is near – not where it is.

“In terms of timing, I would think we would need to see a bottom in bitcoin within the next 10 days, which should define the bottom of the sell-off for many weeks, if not months,” says Heibel. “Unfortunately, it cannot be determined at what price this will happen in the coming days: whether it will be at the current 20,000 or only at 10,000 to 12,000 is still open.”

There are two assumptions behind surveys such as the Dax sentiment with more than 7000 participants: If many investors are optimistic, they have already invested. Then only a few are left who could still buy and thus drive prices up. Conversely, if investors are pessimistic, the majority of them have not invested. Then only a few can sell and thus depress the courses.

Do you want to take part in the survey? Then let yourself be automatically informed about the start of the sentiment survey and register for the Dax sentiment newsletter. The survey starts every Friday morning and ends on Sunday afternoon.

We expect creatures in movies and TV shows to be mostly visual effects. But if you're watching a movie or...