Dusseldorf Increasing costs for materials and logistics are burdening the consumer goods group Henkel. The manufacturer of Persil and Pritt increased its sales by 8.9 percent to 10.9 billion euros in the first half of the year, as the company announced on Monday.

However, adjusted earnings before interest and taxes (EBIT) fell significantly by 18.5 percent – ​​to just under 1.2 billion euros. The adjusted EBIT margin fell to 10.7 percent, after 14.4 percent in the first half of 2021.

Henkel shares were up a good one percent on Monday afternoon. Since the beginning of the year, however, the paper has lost almost 30 percent of its value.

The figures show that Henkel is suffering more from the rising costs than its competitors. Nivea manufacturer Beiersdorf, for example, recently reported a significant increase in both sales and profits for the first half of the year. 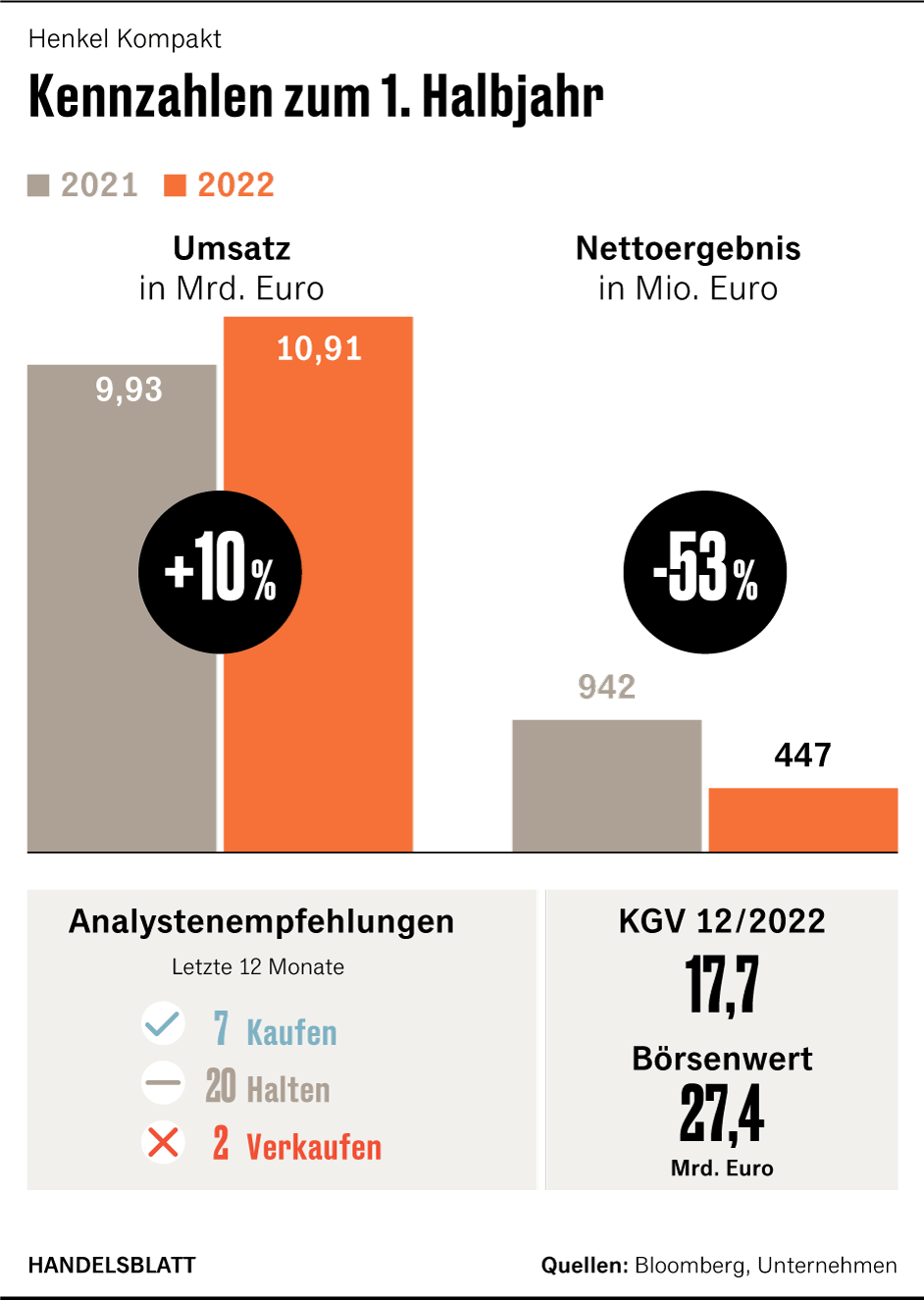 Knobel explains this with the Henkel portfolio. The cost increases would have a “particularly strong” impact on raw materials for detergents and cleaning agents. Beiersdorf does not manufacture such products. In the consumer goods business, the costs could only be passed on in part, according to Henkel CFO Marco Swoboda. In the current environment, it is “not that easy”.

Henkel’s earnings are also impacted by the withdrawal from Russia. In the first half of the year, write-downs of around 200 million euros were due. At the end of April, Henkel had ceased its business in Russia under great public pressure. The Persil producer was invested in Russia like no other Dax group. Henkel achieved five percent of its group sales there, around one billion euros, and employed 2,500 people in eleven plants.

Henkel wants to “complete the process by the end of the year,” says Knobel. The group is considering selling some business areas or discontinuing them entirely, and a takeover by management is also conceivable. Over 80 expressions of interest from other companies have been received and a shortlist has now been drawn up. The group is still producing in Russia to the usual extent.

>> Read about this: AppleMercedes, Miele: This is how Western goods continue to get to Russia despite sanctions

For the year as a whole, Henkel expects to generate more sales than previously assumed. Henkel expects organic sales growth of 4.5 to 6.5 percent, previously it was 3.5 to 5.5 percent. “This is a real ray of hope,” said Jella Benner-Heinacher of the German Association for the Protection of Securities.

Henkel is sticking to its forecasts for the EBIT margin. It should be between nine and eleven percent. Henkel had already revised this target downwards in the spring from initially 11.5 to 13.5 percent.

Henkel’s adhesives division was once again the growth driver in the first half of the year. Henkel is a leader in this area. Organically, sales increased by 12.2 percent to almost 5.5 billion euros. However, the adjusted operating result fell due to increased costs from 820 to 743 million euros. 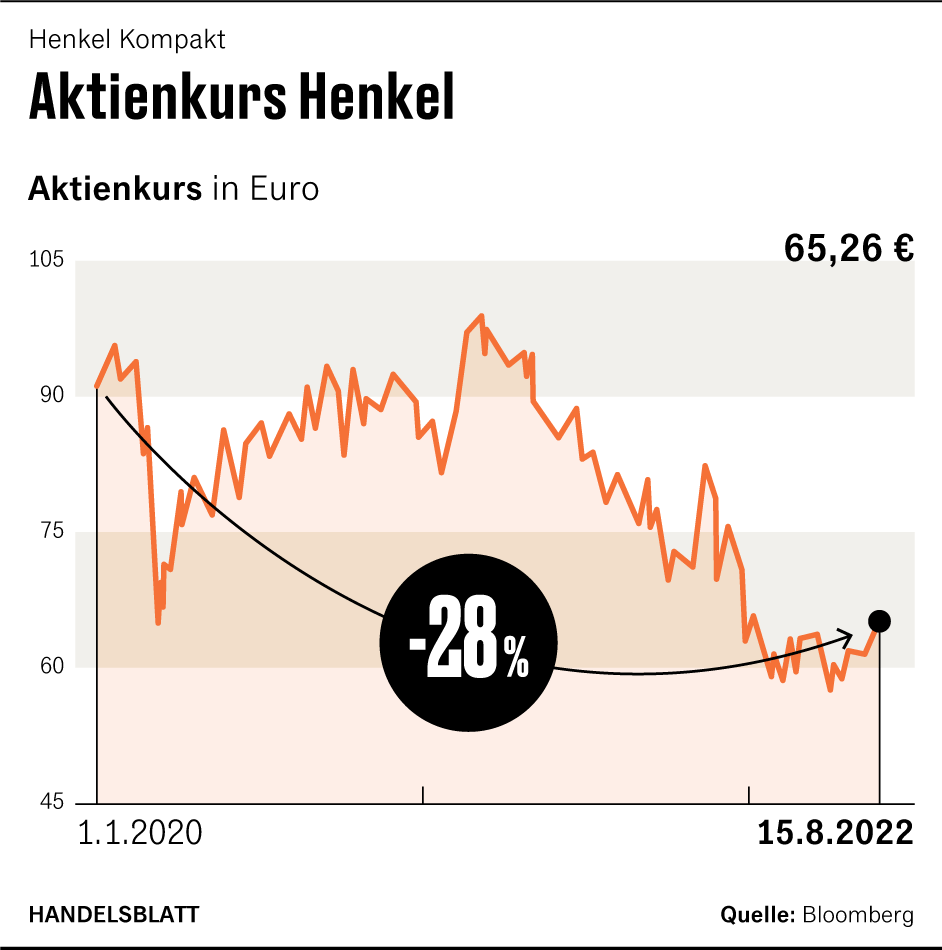 The detergents and cleaning agents division grew organically by 7.4 percent in the first half of the year – in particular through a thriving business with detergents. The cosmetics division increased its sales only slightly by 0.4 percent. Due to rising costs, both areas generated less profit.

The new group structure should be in place by early 2023

CEO Knobel is currently rebuilding Henkel. He wants to merge the ailing cosmetics business (“Dial”, “Syoss”) with the better-performing detergents and cleaning agents sector and its well-known brands such as Persil and Pril.

The conversion should be completed by early 2023, confirmed Knobel. Then Henkel will stand on two pillars of roughly the same size, with the adhesives business being the more profitable. The new organization should already be established in the USA in September.

Knobel wants to make the business with consumer products more effective under the name “Consumer Brands”, but also reduce costs. Henkel wants to cut 2,000 jobs worldwide as part of the restructuring of the group, 300 of which will be affected in Germany. One is “in good talks” with the works council, said Knobel. The first four management levels are intended for the new business area.

With the conversion, the management is reacting to the cosmetics division, which has been weakening for years. Analysts had repeatedly criticized that the business was too small and not profitable enough compared to that of competitors like L’Oréal. Henkel is primarily active in the lower-margin consumer goods business. In the cosmetics business alone, Henkel intends to part with poorly performing brands worth around 200 million euros in sales by the end of the year.

New York, San Francisco In the dispute over an upcoming court date for the planned Twitter takeover by Elon Musk,...