in the past few days and weeks it was the federal government that was under pressure to justify itself because of its hesitant attitude on the tank issue. Yesterday, that role passed to the White House. The US government had to explain why it was now prepared to supply Ukraine with its own M1 Abrams main battle tanks. “We have never ruled out tanks,” said the National Security Council’s communications director, John Kirby, on Wednesday evening German time. Conditions on the battlefield in Ukraine have changed. The decision to deliver was then made by US President Joe Biden in the past few days.

Previously, the US government had repeatedly emphasized that it did not consider the provision of the Abrams tank to be sensible. “It just doesn’t make sense to give the Ukrainians this tool right now,” a Pentagon spokeswoman said a few days ago.

A battalion of 31 M1 Abrams tanks is now planned to support Ukraine. “The US and Europe stand together,” Biden said in a speech at the White House yesterday. He was Chancellor Olaf Scholz (SPD) “grateful for his leadership”.

By supplying its own tanks, Washington has met a German demand. Peter Rough of the Europa Center at the Washington think tank Hudson Institute judges: “It’s a good result after a bad process.”

According to a US government official, the tanks could help Ukraine “take back Ukrainian territory.” This also includes Crimea, he emphasized when asked. Security experts are currently debating the scenario of Ukrainians invading Russia’s annexed Crimea with Western tanks – which could provoke an unpredictable Russian response.

Security Council spokesman Kirby said in response to a journalist’s question: “I can only tell you that we have seen absolutely no indication that Mr. Putin has any intentions to attack NATO territory.”

As expected, however, Russian authorities sharply criticized the tank decision.

After the tanks had been promised, Ukrainian President Volodomir Zelensky immediately renewed his request for Western fighter planes and long-range missiles in a telephone call with NATO Secretary General Jens Stoltenberg.

My prognosis: With revenge fantasies about air raids on Russian cities, the Ukrainian government will not increase its chances of imminent delivery. In a YouTube interview, Ukrainian presidential adviser Mikhail Podoljak threatened such attacks if Russia continued its attacks on civilian targets in Ukraine. Literally, Podoliak explained: “Even cities like Moscow, St. Petersburg, Yekaterinburg, spoiled, lazy cities that believed to live in another reality are exposed.”

If Russia does not stop its airstrikes on power lines, thermal power plants, water treatment plants and other civilian objects, corresponding counterattacks will be “inevitable”. 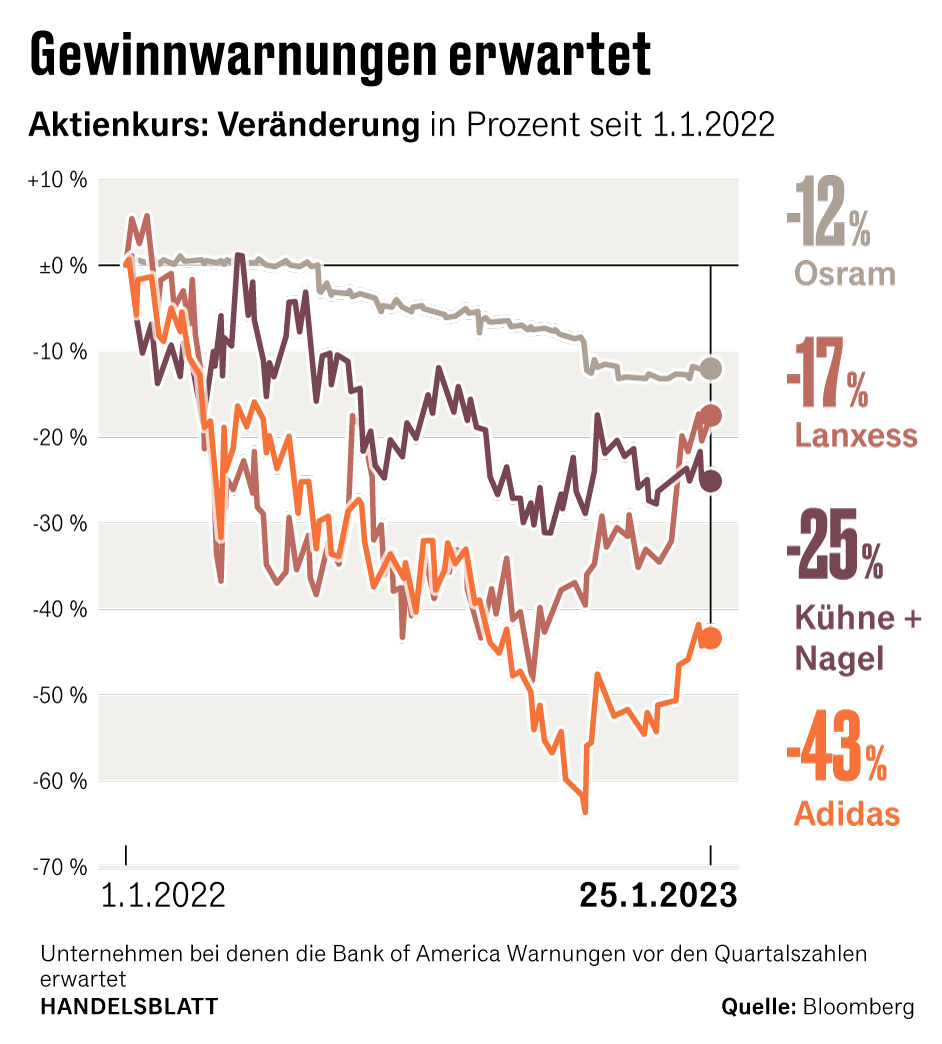 Did someone say “slow sales”? Tesla earned more in 2022 than ever before in a financial year. The electric car company increased profits by 128 percent over the previous year to $ 12.6 billion, as Tesla announced on Wednesday evening. Sales grew 51 percent to $81.5 billion.

In the final quarter, Tesla increased net income by 59 percent to $3.7 billion, also setting a new record. Revenue increased 37 percent to $24.3 billion in the three months ended December. Depending on the analyst firm, this is slightly above or below expectations. Tesla wants to “expand production as quickly as possible” in 2023 and continues to target annual growth of 50 percent – this goal was actually missed in 2022. Price cuts at Tesla had recently raised concerns about a possible dwindling demand.

Warning, there is a risk of a profit warning: The brilliant start to the new stock year makes the stock exchanges more susceptible to setbacks. After all, there are already many positive expectations in the courses. Paulina Strzelinska, analyst at Bank of America, looked at the companies from the broad European stock index Stoxx Europe 600 with this question. She agreed 19 companies that could be warning of lower-than-expected earnings in the near future.

There was already one hit on the list. The Dax group Continental announced to investors last week that the cash inflow and profit margin for the quarterly figures due in mid-March are likely to be lower than forecast. Since then, the share has lost eight percent.

While everyone is hoping for major diplomatic breakthroughs, it is also important to acknowledge the small advances. I would like to emphasize in advance that the following message cannot be independently verified and, as a person from Hamburg, I have no idea what I am writing about here. But if what the dpa news agency reported in the evening is true, then it seems to me to be the first step towards a comprehensive peace solution on the Rhine and Düsseldorf.

On Wednesday evening, two large carnival societies from Cologne and Düsseldorf celebrated a joint session entitled “Alaaf & Helau”. The official goal was to form “a bridge between the rivals”. It was celebrated in Cologne. “We also divided the program 50/50 into Düsseldorf artists and Cologne artists,” said Joachim E. Zöller, President of the Cologne-based carnival society “Die Grosse von 1823” before the event. Zöller praised the “Allgemeinen Verein der Karnevalsfreunde Düsseldorf” with which the program was designed.

Only Kölsch was served, no Alt. Anyone who now thinks that this is not a peace solution, but a Düsseldorf capitulation, be reassured: the plan is for the joint meeting to take place at a new edition in Düsseldorf.

I wish you a day when you too build bridges with beer.