SEC Chairman Praises These Altcoin Projects: He Called Them “Gambling”!

Dusseldorf At Volkswagen, the supervisory board is starting a new attempt to keep CEO Herbert Diess at the helm of the Wolfsburg-based car company. As reported from company circles, the eight-member presidium, the top committee of VW inspectors, will meet on Tuesday.

The Presidium is looking for ways to reach an agreement. “At the moment it looks like the threads are coming together,” said the CEO on Monday in Wolfsburg. Diess could possibly stay at his post, but that is not yet certain.

The conflict between CEO Diess and the works council has been determining what is happening at the Wolfsburg headquarters for almost two months. This first turned the workers against them at the end of September. On the supervisory board, he had indicated that Volkswagen would have to cut another 30,000 jobs in the coming years. The employees rated this as a massive breach of trust and then questioned the further cooperation with Diess.

For the works council, it is extremely important that employment, especially in the German VW factories, can be secured over the long term. That is why the employee side is combining Personnel Diess with the negotiations on four so-called “location contracts”, which secure capacity utilization and investments in various plants until at least 2030.

If the continued existence of the car factories were guaranteed, the works councils’ view could possibly continue with Herbert Diess at the top of the group. In addition, however, it must be ensured that there is long-term trusting cooperation between management and employees.

The main plant in Wolfsburg and the commercial vehicle factory in Hanover are at the center of the discussions. It is essential for the employees that Wolfsburg does not have its first electrical production until 2026, but two years earlier. So far, only combustion models such as the Golf and Tiguan have been manufactured in the main plant.

The works council fears that Wolfsburg will be left behind technologically if it stays with the previous group planning. Production of the “Trinity” project is scheduled to start in 2026. Then the main plant will produce a completely new generation of electric cars.

In the current rounds of negotiations, early electrical production is considered indispensable for employees. Without an agreement on this issue, further cooperation with the CEO seems difficult. According to reports, Herbert Diess is against the additional electric car for the main plant in Wolfsburg, primarily for economic reasons, because the production is far too expensive.

Ralf Brandstätter, CEO of the Volkswagen Passenger Cars brand, had presented the first plans as to how a possible solution to the controversial question of the additional electric car for Wolfsburg could still be found. “We are currently examining the scaffolding of another electric model in Wolfsburg,” Brandstätter explained on Monday in a question and answer session with employees. Such an e-production in the main plant has to be economical. “And that’s what we’re talking about right now,” says the brand boss. There could possibly be a partial production at the main plant in Wolfsburg, the additional electric car would then not be completely produced there. Such partial production is by no means uncommon in the automotive industry.

In the coming years, production of the classic VW transporter will also be phased out at the commercial vehicle plant in Hanover. The negotiators are also looking for a solution for this. The originally planned production of Porsche models in Hanover will most likely no longer exist.

In Wolfsburg, the supervisory board, works council and management are also talking about a new composition of the board of directors. It is already certain that the group will get a new IT department in the new year, which in future will be headed by Hauke ​​Stars. The 54-year-old was previously a board member of Deutsche Börse.

In addition, a successor arrangement for Hiltrud Werner is to be found, which is unlikely to get a new contract after five years. She heads the Integrity and Legal Board department, which was newly created at Volkswagen after the diesel affair was uncovered. The early extension of the contract of HR Director Gunnar Kilian, which expires in spring 2023, is also part of the negotiations.

The most important personnel change, however, is emerging for VW brand boss Ralf Brandstätter. As it is said in Wolfsburg, the 53-year-old should be joining the Volkswagen Group’s Board of Management in just a few weeks. The car manager has been running the brand for a year and a half. At that time Brandstätter had taken over this post from Herbert Diess.

While the Audi and Porsche group brands, which are significantly smaller in terms of volume, are represented on the board of directors, VW brand boss Brandstätter is only allowed to attend board meetings as a guest. His appointment to the Board of Management would compensate for this imbalance in relation to the other group subsidiaries.

There, the industrial engineer will possibly take over the management of the largest brand group, Volume, to which VW, Skoda, Seat and the VW van division belong. This group has so far been the responsibility of Diess as CEO.

This would mean a further loss of power for the CEO. After earlier turbulence, in view of his criticism of leaks in the supervisory board, Diess had to cede the management of the VW brand to Brandstätter in the summer of 2020. Before that, Brandstätter was responsible for the operational business of the brand with the VW logo. In this context, Diess accused members of the Supervisory Board of violating the law.

Brandstätter let it be known on Monday that he is preparing for the management of the brand group, which stands for around 80 percent of the group’s deliveries. He also said that synergies should be better used in the future. For this, the positioning of the brands, the products and the technology would have to be optimally coordinated. “In this context, it is very important to me that every brand must and should be able to develop successfully,” he said in the works council’s questionnaire with VW employees. 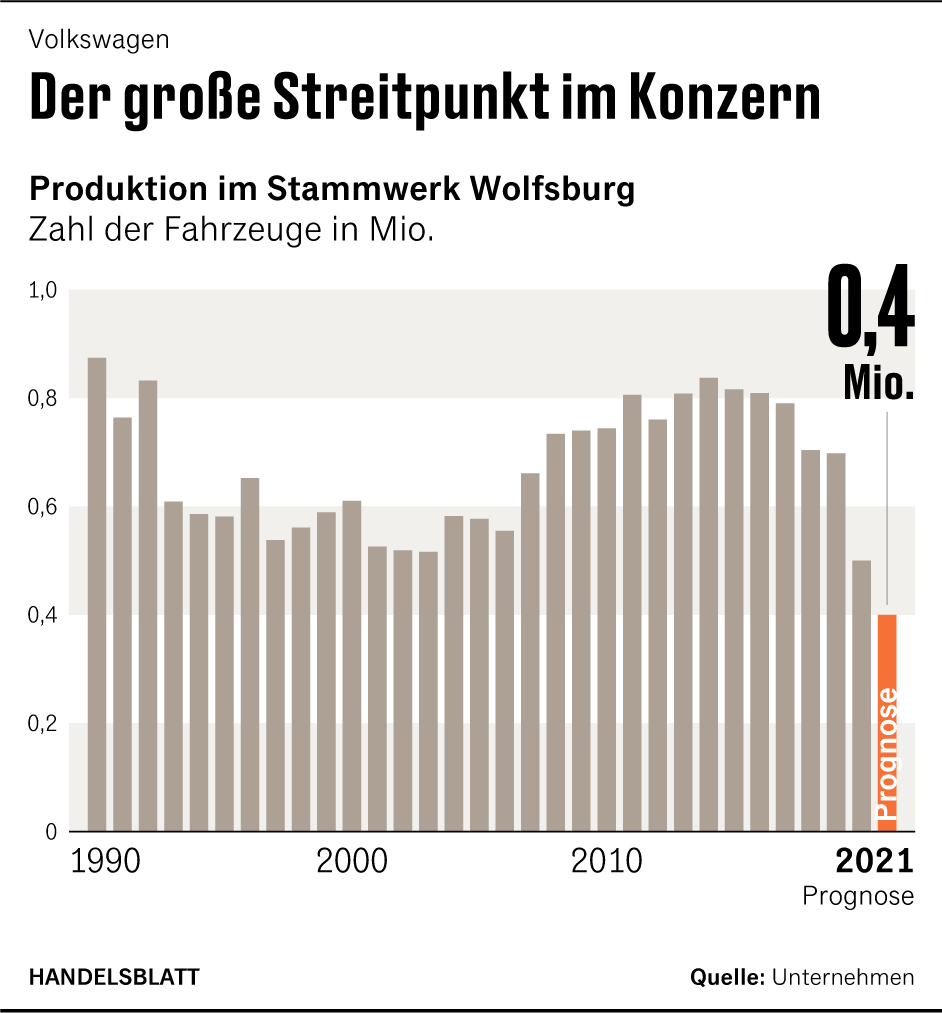 Group boss Diess had already announced a reorganization for the management of the individual brands last week. In an internal video interview, he said in response to employee questions: “We will fundamentally rethink the group management system.” The aim is better cooperation in the respective brand groups. “The group will withdraw significantly from the operative business.” This should reduce hierarchy levels and accelerate the speed of decisions. With 13 different vehicle brands, the VW Group has a very complicated structure compared to other car manufacturers.

If an agreement were reached on the entire negotiation package in the course of this week, the invitation deadline for the decisive Supervisory Board meeting on December 9th could be met. Then the control committee wants to decide on the investment plan (“planning round”) for the next five years, which also includes the future vehicle occupancy of the plants. The “Trinity” project for Wolfsburg is also part of this investment plan.

The mediation committee recently set up after the renewed dispute over the management style of Diess with the chairman of the supervisory board Hans Dieter Pötsch, Lower Saxony’s Prime Minister Stephan Weil (SPD), works council chief Daniela Cavallo and IG Metall boss Jörg Hofmann had discussed again at the end of last week, it said from corporate circles. Further talks are necessary for an agreement. Volkswagen and Porsche SE, through which the Porsche and Piëch families hold the majority of voting rights in the Wolfsburg-based car company, did not comment on the latest developments.

More: Hardened fronts in the supervisory board: dispute over Herbert Diess blocked VW

Qualcomm organized today 2021 Technology Summit'He talked about many ecosystems that he aimed to be involved in, from smart watches...