The certificates to compensate for CO2 emissions have become a heavy burden for companies. Poland’s Prime Minister Mateusz Morawiecki would like to reduce the financial pressure caused by emission certificates, as he said at the EU’s autumn summit. The country’s energy companies run the risk of losing a lot of money, especially if the price of carbon continues to rise.

It would be a catastrophe for Poland, because the three providers are large companies and for the country they are “too big to fail”. For example, PGE, Europe’s largest coal mining company, has over 40,000 employees and supplies more than five million households and companies with electricity.

In the short term, Poland has found a solution to the problem of the impending bankruptcy of its energy companies in the summer: The three companies will outsource a large part of the coal production and the power plants that use the fuel to a specially established state-owned unit. This acts as a kind of bad bank for a business that has shaped many places culturally and socially, but which no longer wants to be run by private investors.

In any case, the private investors of the coal suppliers, who hold a stake of 43 percent in PGE, are relieved that such a construct will come about. The company’s share prices have recently risen again; they can continue the transformation towards renewable forms of energy as soon as the transaction with the state is completed.

Poland cannot afford to do without coal

In addition to the high CO2 price, the partly private investors are likely to be the second reason for the coal phase-out that has been initiated. Robert Maj of the Warsaw stock broker Ipopema Securities says: “It is fortunate that the company’s shares are listed.” This admission of securities to the stock exchange puts them under some pressure from financiers.

Many of Poland’s state-owned companies are considered poorly managed because they also serve as catchment areas for the clientele of the ruling law and justice party (PiS). The head of the industry leader PGE in particular has a good reputation with investors and is pursuing a course independently of the government.

In the long term, however, the problem of the frowned upon energy source coal is not solved by outsourcing it to the state, which will have to bear the losses of the business and thus come into conflict with the EU. After all, with the “Fit for 55” program, the confederation of states wants the countries to reduce their greenhouse gas emissions significantly by 2030. He is even striving for climate neutrality by 2050.

But Poland simply cannot afford to renounce coal as an energy source for the time being. Between 70 and 80 percent of the electricity comes from power plants that burn either hard coal or lignite.

This proportion, which is unique in Europe, will automatically decrease because certain mines will be exhausted over the years. For example, PGE plans to gradually shut down the large Belchatow complex by 2036 at the latest. 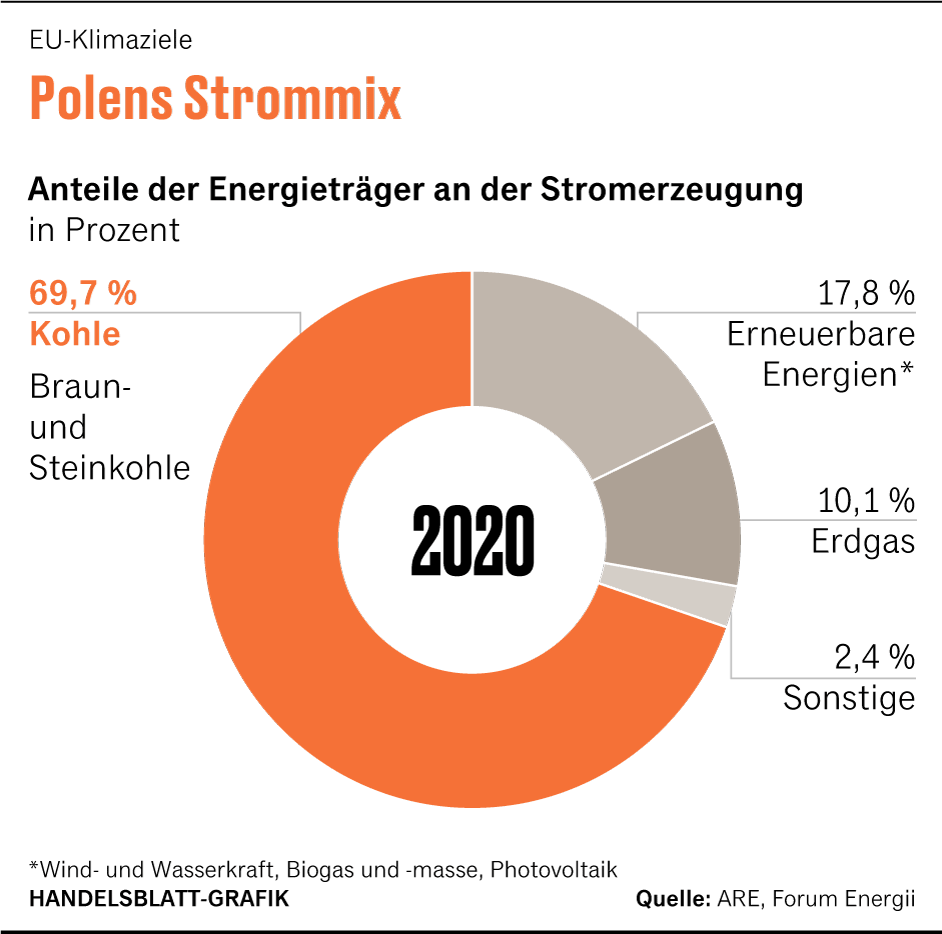 However, the company is still mining lignite there on a large scale in open-cast mining and producing around 20 percent of Polish electricity on site. In around 15 years, however, there will be no more coal. Then PGE wants to revive the area with a lake and a marina.

Nevertheless, the country will not succeed in bringing its energy policy into line with the EU’s climate strategy for the time being – because there are hardly any alternatives to coal as an energy source. The large energy companies have plans on how they would like to promote wind energy on land and at sea, on and offshore. But these are more long-term projects. And, unlike Switzerland or Austria, hydropower has no significance in Poland.

Therefore, the government wants to build nuclear power plants. There are no such things in Poland up to now. The planning of a nuclear power plant had begun under communist rule, but protests by the population prevented its completion.

Even today, such a project is likely to meet with strong opposition. Energy projects generally have a difficult time in Poland, as in every European country. For example, a new lignite mine should have been built near the city of Lodz.

However, local residents opposed the project and PGE recently abandoned it for good. Environmental awareness is also increasing in Poland, says Maj from Ipopema Securities. “People become aware that something has to happen.”

Nevertheless, in the absence of realistic and affordable alternatives, the government wants to stick to coal as an energy source until 2049. However, this entangles the country in another conflict with the EU.

Climate neutrality, as the federation is striving for by 2050, means that all CO2 emissions must be compensated – either with technical solutions or by means of absorption through forests. At least from today’s perspective, that seems impossible in the case of coal.

Tensions will continue to increase

In addition, Poland has to subsidize energy production from coal. It is not competitive and the government does not want consumers to raise electricity prices sharply.

But the EU will hardly allow the country to generously support coal mining and thus distort competition. Poland would take a completely different path than the other EU members.

The tensions between the two parties will therefore continue to increase: Poland cannot afford the rapid transformation, while the EU wants to be a global pioneer in climate policy.

More: Climate protection is not the reason for the high energy prices – but it could become their victim. A comment.