New York, San Francisco In the dispute over an upcoming court date for the planned Twitter takeover by Elon Musk, the Tesla boss prevailed against the short message service. The responsible judge in the US state of Delaware ordered the proceedings to be suspended until October 28, court documents revealed late Thursday evening. An appointment was initially scheduled for October 17th.

The court date has become necessary because Musk wanted to burst the agreed deal. With the subsequent reference to too many fake user accounts, the 51-year-old intended to resign from the business. The counter-argument is basically that he had enough opportunities to check the books in advance.

The current decision in favor of Musk comes as a surprise. The court had recently positioned itself in several procedural steps in the sense of Twitter. In Musk’s legal team, this had increased concerns about failure – which is why the billionaire only announced at the beginning of the week that he would take over the portal after months of back and forth at the originally agreed price of $44 billion.

Musk should now be given enough time to complete the acquisition out of court. Musk had requested this step and said his financing banks were working together to secure the deal. The financial institutions had pledged $ 13 billion in loans for this purpose in the spring.

Twitter management is suspicious of the zigzag course – and this week asked the court to open the case on October 17 as planned. So it wanted to keep the pressure on Musk to close the deal quickly. Musk’s suggestion of allowing more time invites “further mischief and delays,” Twitter’s attorneys said. If the two sides do not reach an agreement by October 28, the judge wants the hearing to take place in November.

The decision caused uncertainty in after-hours trading. Twitter shares fell to around $48 after last trading at over $52. According to observers, the distance to the actually agreed purchase price of $54.20 shows that the market is once again expecting the deal to fail.

Musk was silent on Twitter on Friday night about the events – and instead announced the start of production for Tesla’s semi-truck and the first deliveries from December.

What’s behind the “Everything App”.

It shouldn’t remain silent. Musk only gave an outlook on his plans for the portal with its 240 million daily active users on Tuesday. “The purchase of Twitter accelerates the creation of X, the everything app,” wrote the billionaire.

Musk had already said what he meant by that in June during a question and answer session with the Twitter workforce. “Think of it like WeChat in China, which is great now, but there’s no WeChat equivalent outside of China,” Musk said, according to a report by Insider. There is now an opportunity to develop something comparable.

The Tesla boss continued, according to the insider, “In China, people practically live on WeChat because it’s so helpful and useful in daily life. I think if we can achieve that with Twitter, or even come close, that would be a success.”

WeChat is a universal app from the Chinese technology group Tencent. Company founder Ma Huateng, better known as Pony Ma, had WeChat developed as a copy of the messenger service WhatsApp in 2011. At first it looked as if the Chinese clone could not catch up with the US model. In 2014, Ma even tried to buy WhatsApp. Ultimately, however, Facebook founder Mark Zuckerberg forestalled him and took over WhatsApp for $ 19 billion.

Ma used the setback to build WeChat itself into an ultimate app for the Chinese market. It paid off. A full five years before WhatsApp, WeChat introduced the ability to make audio and video calls. In addition, WeChat has been expanded to include a payment function. Today, mobile payment is so widespread in China that it is almost impossible to pay with cash.

Another success factor of WeChat was not only the early rollout of new functions, but also the development of the application as a platform for third-party providers. Travel companies let their customers plan their next trip via WeChat, handle the billing and send QR codes to open the doors to the booked hotel. Media companies are spreading their news via WeChat, giving users the opportunity to interact with journalists and participate in virtual conferences. Even a divorce application can now be filed via WeChat.

Presenting the latest quarterly figures, Ma gushed about the areas in which WeChat is dominant in China today: “We claim first place in the areas of social games, long-term videos, news, music, literature, payment services and mobile browsers.” Overall, the platform counts more than 1.3 billion monthly active users. Also because without the app hardly anything works in public life in China. Even proof of corona is linked to the system, which knows almost everything about its users.

WeChat’s success is limited to China

However, the success of WeChat has a catch: Ma has not yet succeeded in establishing a larger user base outside of the People’s Republic. Beijing is subjecting domestic Internet companies to strict controls. In the case of WeChat, content is repeatedly censored and data from Chinese citizens is submitted to the government, including payment information and biometrics.

The app is described by critics as the perfect tool for government surveillance. This led to great distrust of WeChat in the rest of the world. In India, WeChat has meanwhile been blocked, and former US President Donald Trump has discussed publicly several times whether WeChat should be restricted or even banned. 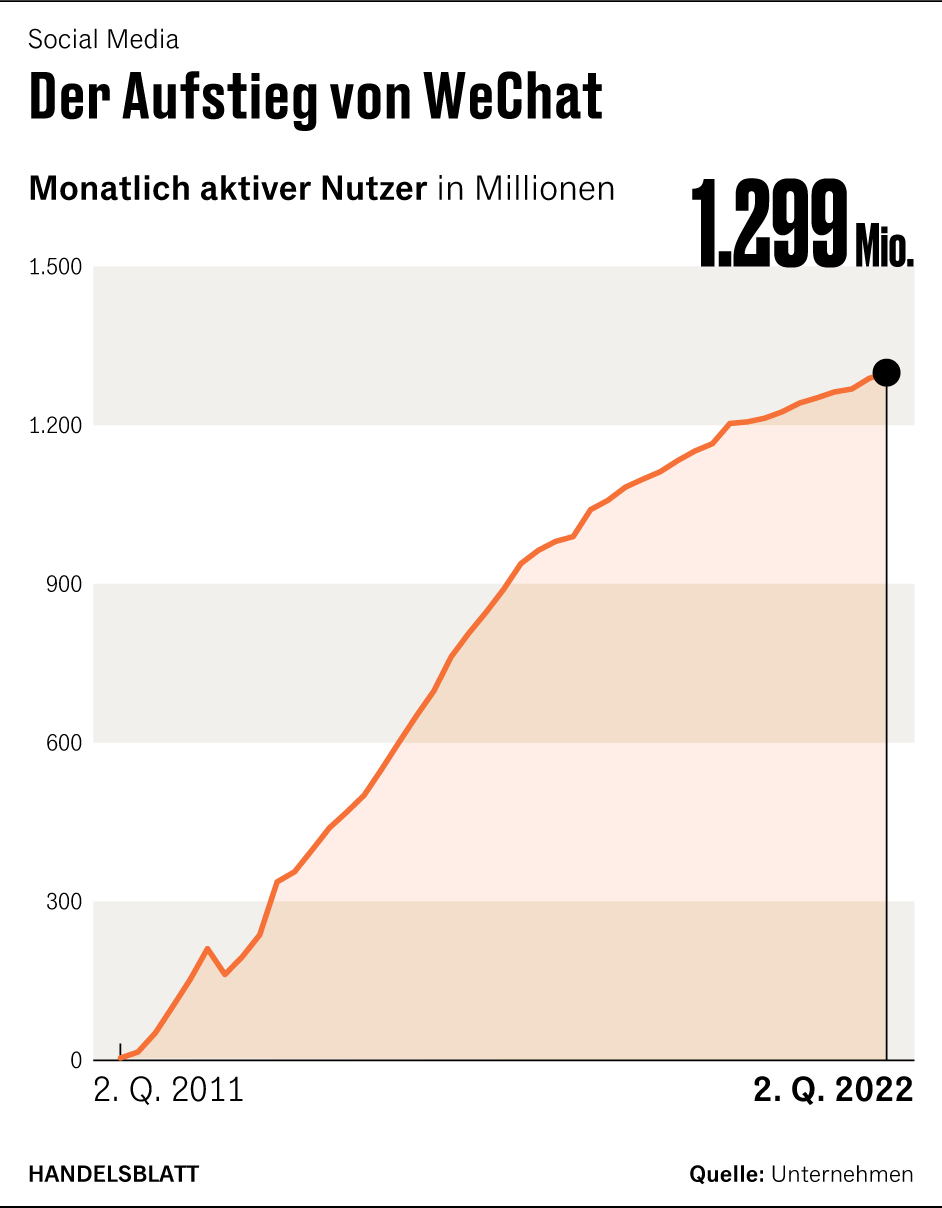 A number of companies from Silicon Valley have tried several times in recent years to copy WeChat’s recipe for success. So far, however, no one has succeeded. And probably not just because outside of China no state actor is promoting centralized use of a single platform at the expense of the competition.

Mark Zuckerberg in particular made several attempts to expand the functionality of WhatsApp. However, he encountered two hurdles: Firstly, announced functional expansions were always limited. In the future, companies should be able to interact more easily with customers via WhatsApp. To date, however, the Facebook group Meta has not even announced mini-apps from companies, as is common with WeChat.

>> Read also: On the smartphone, China and the West are already decoupled worlds

Second, Zuckerberg failed multiple times with regulators. He tried to add a payment function to WhatsApp in several countries. A pilot project in India was interrupted several times and is still subject to strict regulatory requirements.

Google and Apple also tried to copy WeChat – and largely failed. Google’s answer to WeChat, the messaging service Allo, was shut down just two years after it launched. Apple has further expanded its messaging service iMessage and now offers a mini app store, similar to the third-party applications on WeChat. However, Apple is far from the dimensions of the Tencent app.

Musk’s fondness for the “X” Project

Numerous investors hope that the entrepreneur Musk will be more successful – and repeat his successes with rockets and electric cars on Twitter. It is still unclear whether Musk will find a way out of what he considers to be an overpriced purchase agreement for Twitter. In the past few weeks, he had asked for a price reduction several times, as US media reported unanimously.

Should there be an amicable agreement on a Twitter purchase at the end, he could tie in with his early phase as a company founder. Because the “X” has a long tradition as the name of a possible new digital product in Musk’s mental structure. In August, when asked by a Twitter user, the billionaire said that if the takeover didn’t go through, he would consider founding his own social platform: X.com.

In 1999, Musk started a company by that name with proceeds from the sale of his first venture, the online city guide Zip2. Behind it was an online payment system that was supposed to turn the financial industry upside down: it made it possible to transfer money by e-mail. In 2000, X.com merged with competitor Confinity, which had developed a similar product. His name was transferred to the new company: X.com became PayPal.

Paypal quickly developed into the most important online payment method. eBay bought the company in 2002 for $1.5 billion. In July 2017, Musk repurchased the X.com domain from PayPal for sentimental reasons, he said. If you call up the domain today, a blank page with a small “x” appears. That could possibly change after the Twitter takeover.

Dusseldorf The dairy industry exemplifies the development of modern agriculture: Fewer farms are producing more and more milk as herds...