this morning we can enjoy three achievements of human interaction: democracy, market economy, rule of law.

In freight shipping, we are currently experiencing how the market is able to balance out bottlenecks all by itself, without a federal container officer having to develop a national container strategy. In the wake of the corona pandemic, freight costs had risen drastically. Now they are falling just as fast. The journey of a 20-foot steel box (TEU) from Shanghai to northern Europe, for which USD 8,000 was due at the beginning of 2022, now costs an average of USD 1,479. Before the outbreak of the corona pandemic, it cost around $1,000. 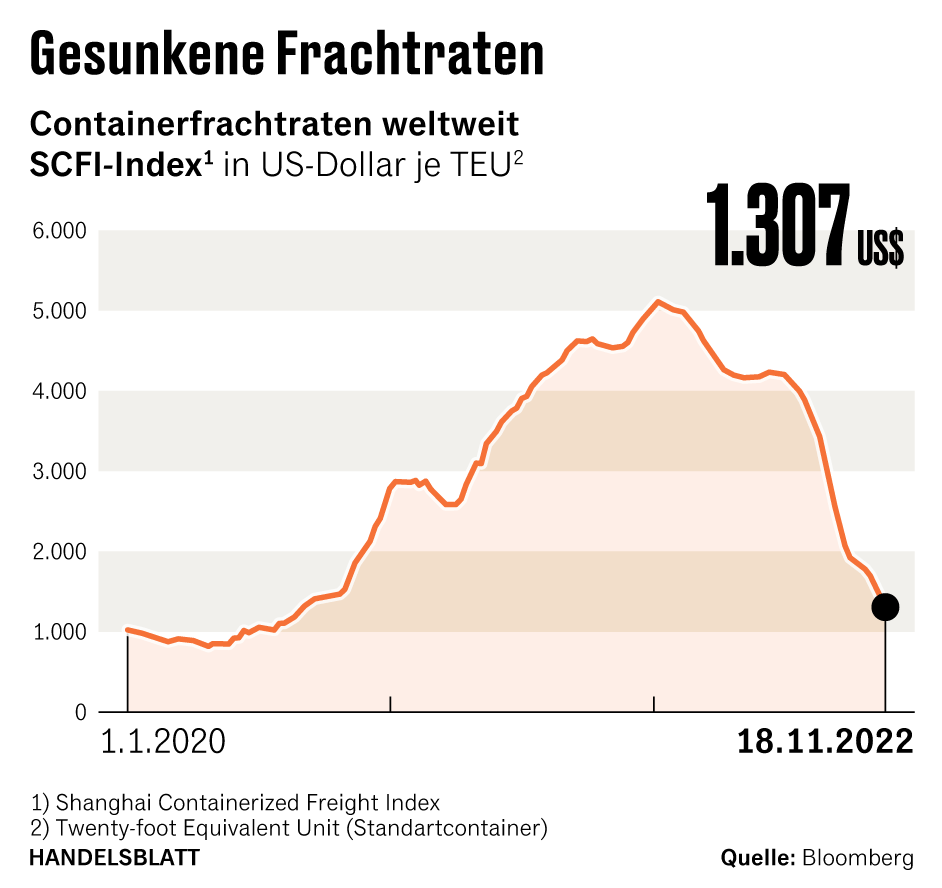 The shipping industry has reacted to the container boom with a flood of orders for new ships, while at the same time the really big cargo boom is coming to an end. This is now proving to be a risky bet for the shipping companies, and perhaps a stroke of luck for the rest of the economy.

We come to the commercial for functioning democratic processes. The citizens’ income planned by the traffic light needs the consent of the opposition Union in order to make it through the Federal Council. The responsible mediation committee is scheduled to meet today – and the Union and traffic lights have apparently already agreed on a compromise in advance that will at least not make the citizen money much worse and at the same time make it much more likely to reach a consensus. The details of the compromise according to coalition circles:

Personally, I think the debate about waiting periods and protective assets is pretty theoretical anyway. Of the citizens who have to live on Hartz IV for more than a year, hardly anyone should have five-digit amounts in the bank.

From my point of view, the most important improvement in citizen income compared to the previous Hartz IV regulation: Beneficiaries who earn money on the side get more of their earnings in some constellations. Pupils from Hartz IV families can keep the money from holiday jobs in the future – so far it had been deducted from their parents’ support. What a bad signal when you realize as a teenager that hard work is not worth it.

There remains the praise of the rule of law: After a three-year legal battle, former US President Donald Trump’s tax returns can be handed over to a US House of Representatives committee. The US Supreme Court yesterday denied Trump’s request not to turn over the tax returns to the committee.

If the Supreme Court had deliberated longer, the handover might not have taken place: With the constitution of the new House of Representatives in January, the Republicans took over the majority in the parliamentary chamber and thus also in the committee. They would probably have withdrawn the request for the documents to be handed over.

Kristalina Georgiewa’s tenure as head of the International Monetary Fund (IMF) is almost two years away. But the IMF and various capitals are already unanimously saying that a second term for the 69-year-old Bulgarian is unthinkable. This is due to her age, but also to dissatisfaction with her administration.

The debate about her successor is therefore beginning behind the scenes. And it is considered likely that the federal government will claim the IMF chief post. “It would be almost negligent not to do that,” says Berlin. Because Germans are about to be replaced in several top positions in international organizations:

The federal government has not entered its own candidate for the ESM and the bank resolution fund. This is also considered unlikely at the EIB. This increases the chances of having a German take the lead at the IMF after Horst Köhler.

A suitable candidate is named: the former head of the Bundesbank, Jens Weidmann. In Paris it is said that Weidmann is exploring his chances. “He would be an obvious candidate,” according to government circles in Berlin. However, Commerzbank would then need a new head of the supervisory board. Weidmann has only just been nominated for this post.

And then there is national player Thomas Müller, who wrote on Instagram in the evening: “Anyone who expects us footballers to completely abandon our path as athletes and give up our sporting dreams, for which we have worked all our footballing lives, in order to position ourselves even more politically, will be disappointed”. A clear signal that team captain Manuel Neuer will not appear in the game against Japan in an act of disobedience to world football’s governing body FIFA with the prohibited “One Love” captain’s armband. At the same time, Müller made it clear: “We do not understand FIFA’s point of view and the way it communicated about the ban on pads in any way.”

I think everything has now been said on the subject and I wish us a World Cup match day without any further binding wisdom.

hp: How can VW, BMW and Co. reduce their dependence on individual sales markets? How is the automotive industry tackling the challenge of transformation? The Handelsblatt Auto Summit on December 7th and 8th will deal with these and other questions. With the access code D2201619HBMB you can take part in the raffle for some guest tickets.

Dance to frustration training!On Wednesday at 10.30 a.m. Dortmund's World Cup losers had to start their unity in Dortmund-Brackel. Süle,...