The date of MUSIAD Vizyoner’21 has been announced!

Face-to-face Education to be Suspended Tomorrow in Istanbul

The coin with the same name as the new COVID-19 variant broke the record!

The EU is countering this with 300 billion euros

Dax closes slightly in the plus

New York / Frankfurt US President Joe Biden has opted for the safe option. He will head the US Federal Reserve for another four years on the previous incumbent Jerome Powell. The previous central bank governor Lael Brainard was considered the most promising alternative to him. Instead, she will now be Powell’s deputy, as the White House announced on Monday.

Unlike Powell, a Republican, Brainard belongs to the Democratic Party. She is also considered an even stronger advocate of loose monetary policy than Powell.

If Biden had nominated her for the top of the Fed, he would have met with resistance from the Republicans in the foreseeable future. In view of the public debate about the current high inflation, the issue is politically sensitive. Biden is now avoiding a conflict.

The markets reacted positively to the decision. The leading index S&P 500 and the Nasdaq hit new records in the early hours of trading in New York. The shares of the major US banks in particular rose. Powell is generally known on Wall Street as a supporter of the markets and as a bank friendly.

However, it is not yet clear who will fill the position of Vice-Head of Regulation in the future. The term of office of Randal Quarles, who, like Powell, had been nominated by Biden’s predecessor Doland Trump, ended in early October.

Powell had “in an incredibly challenging time, including the greatest economic slump of modern times and attacks on the independence of the Federal Reserve, demonstrated stable leadership,” praised Biden. Brainard, “one of the country’s leading macroeconomists,” also played an important role in this.

A second term in office for Jerome Powell “represents continuity,” said Michael Feroli, economist at JP Morgan Chase. Christiane Riley, the head of Deutsche Bank in New York, also welcomed the decision. “The consistency at the top of the Fed is reassuring in this phase of the recovery after the pandemic,” she wrote on LinkedIn.

In the almost four years of his tenure so far, Powell first had to fend off massive attacks by former US President Trump. At times, this demanded lower interest rates almost every day – but Powell initially did not follow him as desired. At the beginning of the pandemic, the Fed, under Powell’s leadership, did everything it could to counter turmoil in the financial markets and loosened the reins.

The situation has now calmed down and the Fed has already announced that it will gradually phase out its massive bond purchases by the middle of next year. This is the first step towards a monetary policy turnaround. But many more are likely to follow in the next four years.

These are the most important issues for Powell in his second term.

The politically most sensitive issue is the recent sharp rise in inflation. In October consumer prices rose 6.2 percent – the highest level in 31 years. So far, Powell has taken the view that the current price surge is a temporary phenomenon. However, this is very controversial among economists.

Allianz’s chief economic advisor, Mohamed El-Erian, recently described the Fed’s stance on inflation as “the biggest misjudgment in decades”. A number of renowned experts warn that the central bank is underestimating the risk of inflation. For example, the former head of the regional Fed in New York, Bill Dudley, demanded that the Fed reduce its bond purchases even faster than just announced. Larry Summers, former Treasury Secretary, had made the same point.

Powell recently had to admit that inflation will be high for longer than initially expected. However, he continues to assume that the current price surge is mainly temporary. 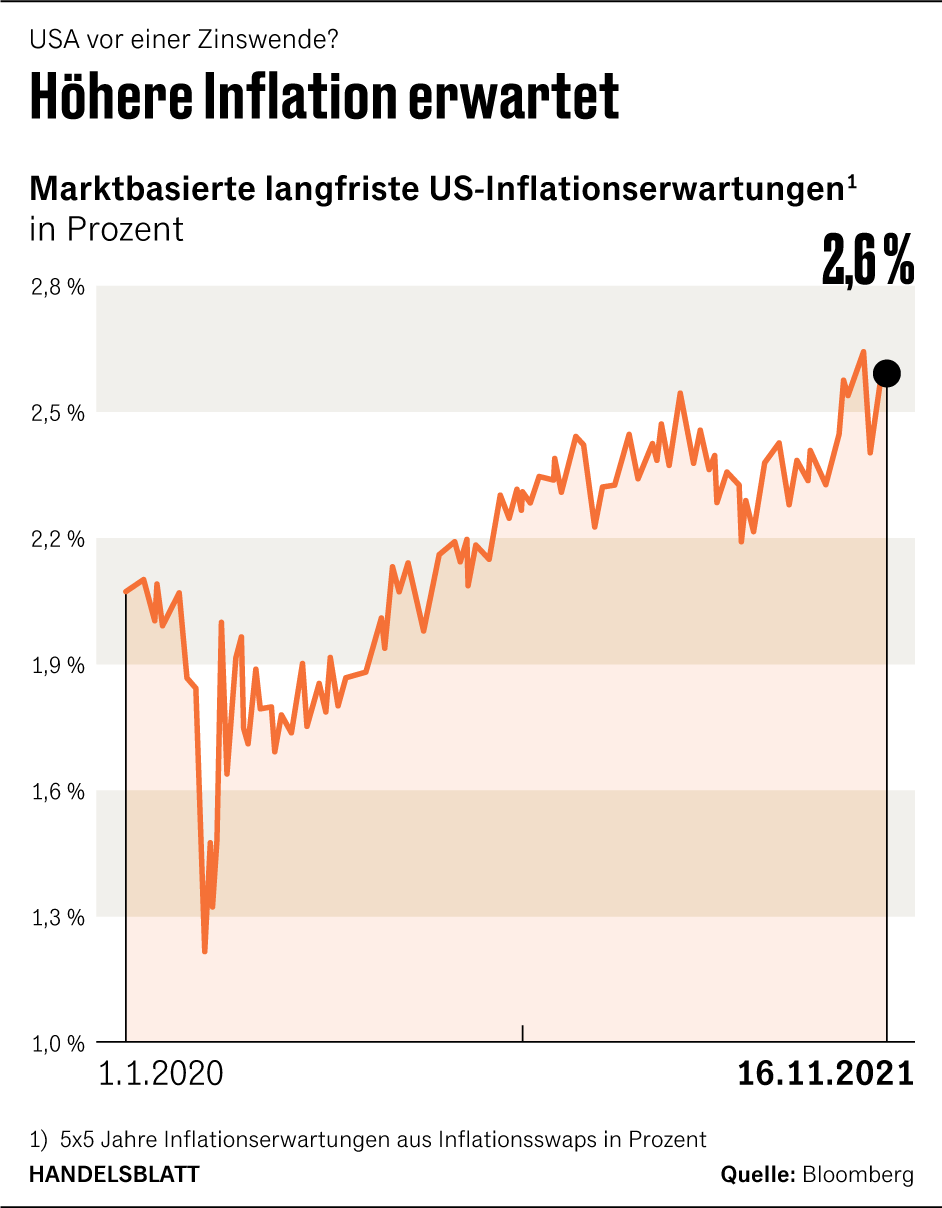 However, the latest October inflation figures cast doubts. There, for example, there was also a significant increase in rents. These make up around a third of the basket of goods with which inflation is measured and change rather slowly.

Compared to Europe, the US government supported the economy in the pandemic with significantly larger stimulus packages. In addition, the labor market there was tense even before the pandemic. In the US, wages are already rising faster. In Europe, on the other hand, there are as yet no clear signs of this.

After the Fed meeting in early November, Powell announced that the Fed would gradually reduce its security purchases. In October they were still $ 120 billion a month. Now they should gradually decrease by $ 15 billion a month. Powell’s vice-president Richard Clarida recently indicated that monetary policy makers may be scaling back bond purchases even faster than originally planned. That should also reassure critics.

Brainard had prominent supporters in advance. For example, the chief economic advisor to Allianz, Mohamed El-Erian, spoke out in favor of the economist as the future Fed chief. El-Erian has been criticizing Powell for months for not acting fast enough to fight inflation. In doing so, he would risk “that at some point the Fed will have to intervene very clearly. And that has always ended in a recession in the past, ”he said in an interview with the Handelsblatt in May. 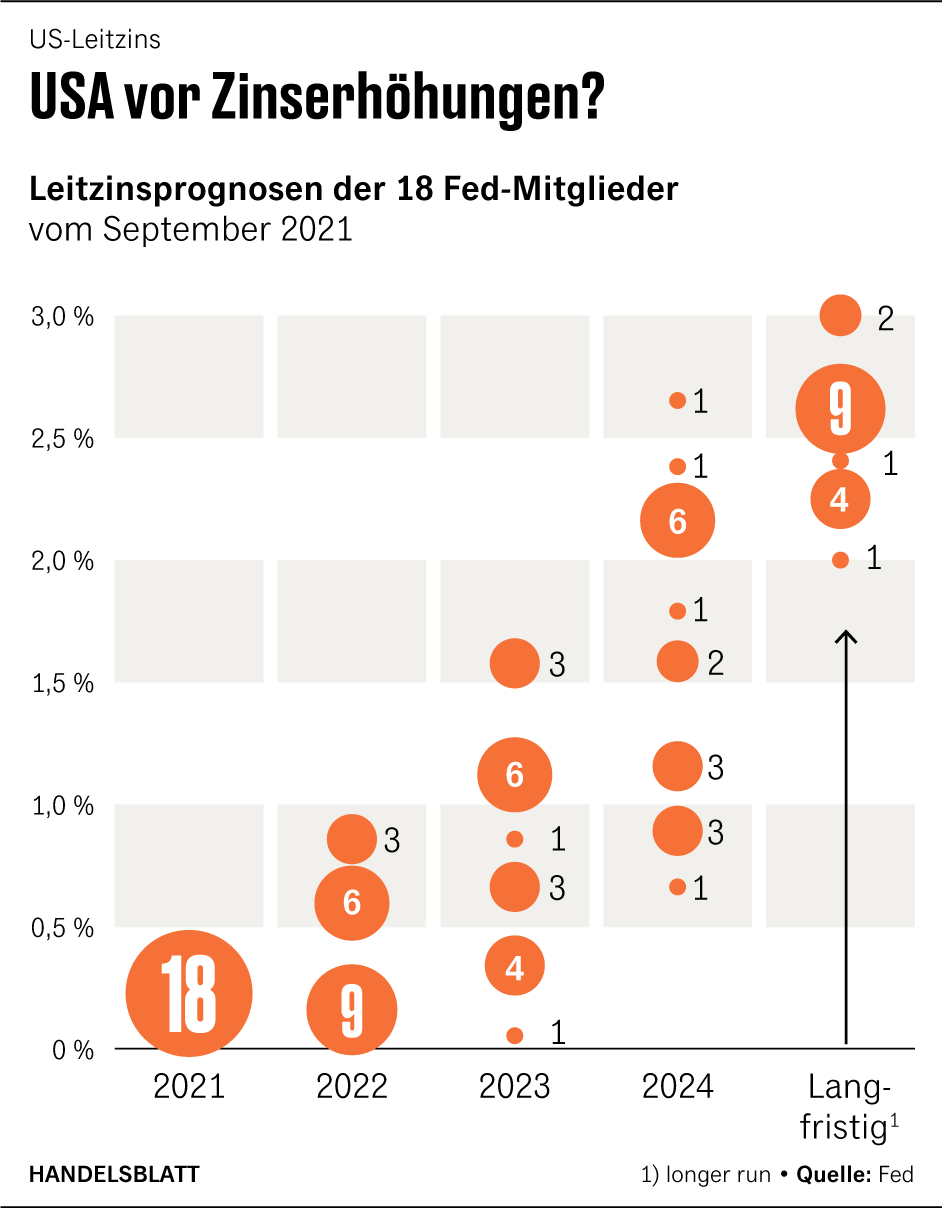 The Fed is in a difficult time. Unlike in a crisis, when the monetary policy course is usually relatively clear, there are now very different positions within the Monetary Policy Committee (FOMC) as to the speed at which the central bank should tighten its monetary policy. That makes communication with the markets more difficult.

These are already pricing in two rate hikes for 2022 – significantly more than the Fed has signaled so far. All in all, there is much to suggest that the process of tightening monetary policy will be much faster this time than after the financial crisis. At the time, the Fed had waited more than a year after ending its net purchases of securities before raising interest rates for the first time. Experts currently expect that the time between them will be much shorter. Faster tightening could also lead to the Fed stalling the economy too soon. After the first rate hikes, the Fed will likely shrink its balance sheet at some point by slowly reducing its bond holdings. This step should also be taken in the next four years.

In his second term, Powell must also grapple with a securities controversy in which he is himself involved, as do two resigned regional central bank governors. Robert Kapla of the Dallas Fed resigned from office in October. He drew the consequences of a debate over multimillion dollar stock trades in companies like Amazon and Chevron that he made during the pandemic. According to Powell, that was probably within the framework of the existing code of ethics. However, these would have to be changed to avoid the appearance of a conflict of interest.

Eric Rosengren, head of the Boston Fed, resigned in late September for health reasons. He also made headlines with his securities deals. There it was mainly about real estate funds, so-called Reits.

According to Powell, there is a “legal review” of the incidents. “We will tackle the matter and address it appropriately,” he clarified. Powell himself says he has held municipal bonds for many years. They also benefited from the Fed’s bailout, as the central bank bought municipal bonds for the first time.

More: The US Federal Reserve is already curbing its bond purchases from this month

Marvel and DC have done a lot of work in transferring their universes to the movie world. Although not liked,...

The date of MUSIAD Vizyoner’21 has been announced!