Dusseldorf The stock market world is divided into two. This time, however, the dividing line is not between the Frankfurt and New York stock exchanges, but between professional and private investors.

Both in the USA and in Germany, private investors can hardly believe the price gains of the past few weeks and are securing their profits. The pros, on the other hand, assume a sustainable trend reversal and are increasingly positioning themselves bullishly for further rising prices. This is the result of the evaluation of the current Handelsblatt survey Dax sentiment and other indicators.

Sentiment expert Stephan Heibel, who evaluates the weekly survey, draws the conclusion: “The rally remains intact.” Because the behavior of both investor groups signals rising rather than falling prices. While institutional investors try to increase their investment ratios, private investors use every setback to cover their hedging positions.

This skepticism on the part of private investors acts like a safety net for the markets. If the stock market barometer falls, the professional short sellers are likely to close their hedging positions and thus buy the Dax index again.

Because those who bet on falling prices first borrow shares and sell them immediately in the hope of being able to buy them back cheaper before the return date. The difference between the sell and buy price is a short seller’s profit. 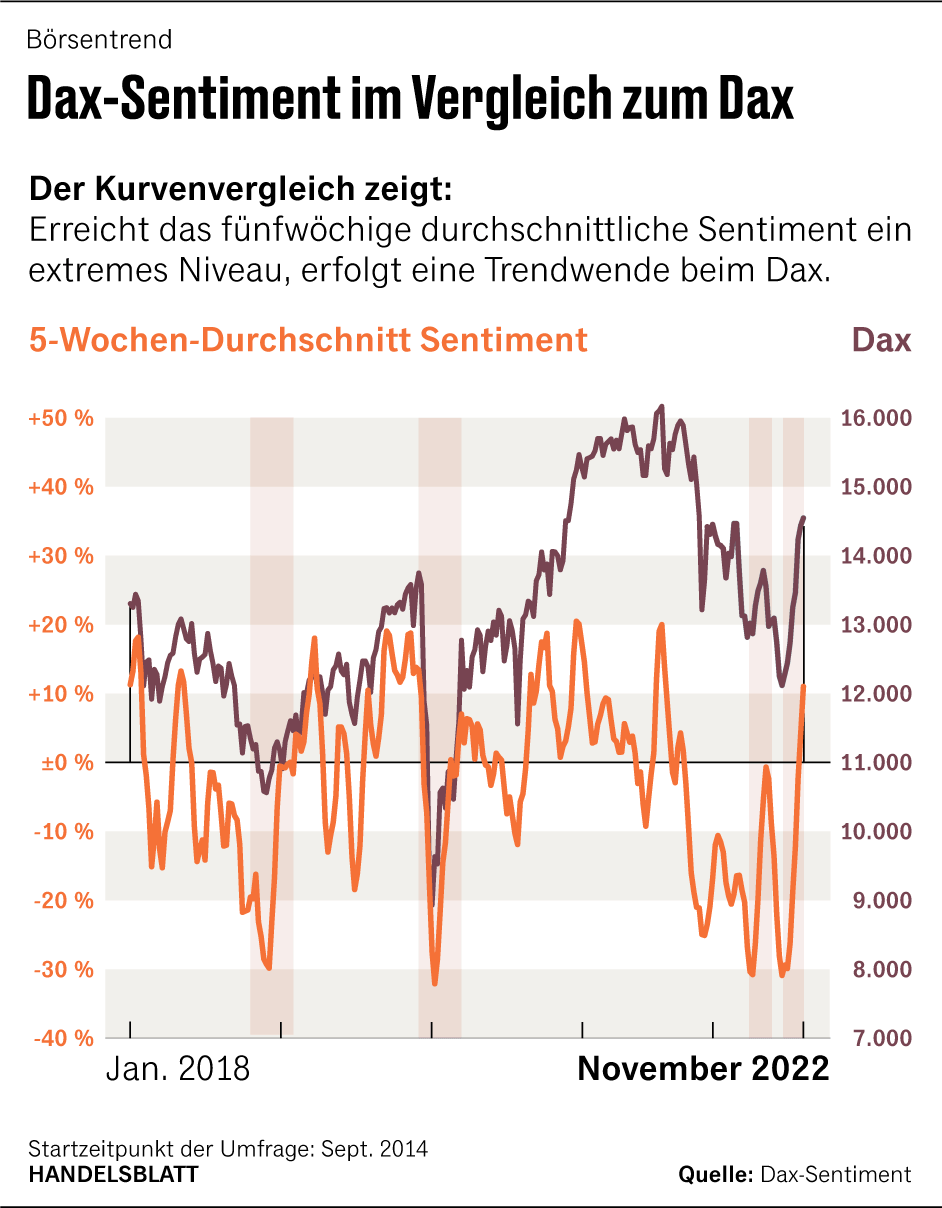 The Dax has been in rally mode for eight weeks and has since risen by 2700 points at its peak. In this phase, the Dax sentiment offered a good orientation. A week ago, Heibel said the risk was on the upside, and the Dax has risen by another percent since then.

The sentiment expert gave a similar assessment on Monday three weeks ago. The leading index then climbed by 5.7 percent until the following Friday. He was also accurate with the forecast of a sideways movement two weeks ago.

Investor sentiment has risen to 3.8 points from 2.7 in the previous week and is thus approaching the area of ​​euphoria, which starts at four points. Complacency has increased to 1.5 points. After months of uncertainty, something like trust is slowly establishing itself among investors.

But expectations remain muted. The future expectation of the Dax in three months is listed at minus 0.3 points. Investors then tend to expect prices to fall, and skepticism continues to dominate. The willingness to invest has also fallen from 2.2 points in the previous week to 1.4 points – investors are becoming more cautious.

The Euwax sentiment of the Stuttgart Stock Exchange, where private investors trade, remains extremely negative at minus 14. Such a number in the minus range indicates a high proportion of put products in the depots, with which the price gains of the past few weeks are intensively secured. Private investors are therefore well-armed against a setback.

The professionals who hedge themselves via the Frankfurt futures exchange Eurex behave completely differently. There, the put-call ratio has fallen to 0.9 percent. Professional investors bought significantly more call options, which speaks for an optimistic attitude on the part of institutional investors.

In the US, too, the put-call ratio is declining, reflecting growing optimism. US fund investors have raised their investment quota to 65 percent, seven weeks ago this figure was a weak 13 percent.

The US retail investor bull-bear differential stands at minus 7 percent, indicating negative sentiment for US stock markets. 40 percent of investors are pessimistic about future developments, while only 29 percent are bullish.

In the previous week, 34 percent still belonged to the cops camp. Skepticism also dominates among US private investors, while confidence is increasing among professionals. The “fear and greed indicator” of the US markets, calculated using technical market data, shows moderate greed at 64 percent.

There are two assumptions behind surveys such as the Dax sentiment with more than 7,500 participants: if many investors are optimistic, they have already invested. Then only a few are left who could still buy and thus drive prices up. Conversely, if investors are pessimistic, the majority of them have not invested. Then only a few can sell and thus depress the courses.