Munich. From the investors’ point of view, Bernd Schulte has done everything right so far: the 60-year-old has been in charge of Süss Microtec as interim boss since mid-October. In the three months, the share price has climbed about 80 percent.

The latest booster for the chip supplier’s shares: At the beginning of January, Schulte announced that sales and operating margin for 2022 would exceed market expectations. As a result, the title rose by twelve percent.

The manager wanted to vacate the executive office in Garching on New Year’s Eve and return to the supervisory board, which he previously belonged to. He was only supposed to represent CEO Götz Bendele for two and a half months, who took time off to care for a relative. But Bendele surprisingly canceled his contract in December.

Now Schulte, the experienced former board member of the competitor Aixtron, will lead the plant manufacturer until a successor is found. The head of the supervisory board, David Dean, has planned nine months for the search.

During this time, Schulte wants to set the course for the future. Investors should be pleased with his plans: Profitability is at the top of the agenda. “It’s about becoming more efficient and increasing the output of our factories,” Schulte told Handelsblatt.

>> Read here: Electronics from Germany are in demand again – but only in niches

An important step in this direction is the conversion to modular production. “This will become increasingly important in the future,” explained the physicist. But that’s not all: “We’re trying to find more synergies between the product lines. That will allow us to work more closely with external partners.” This would also increase quality. 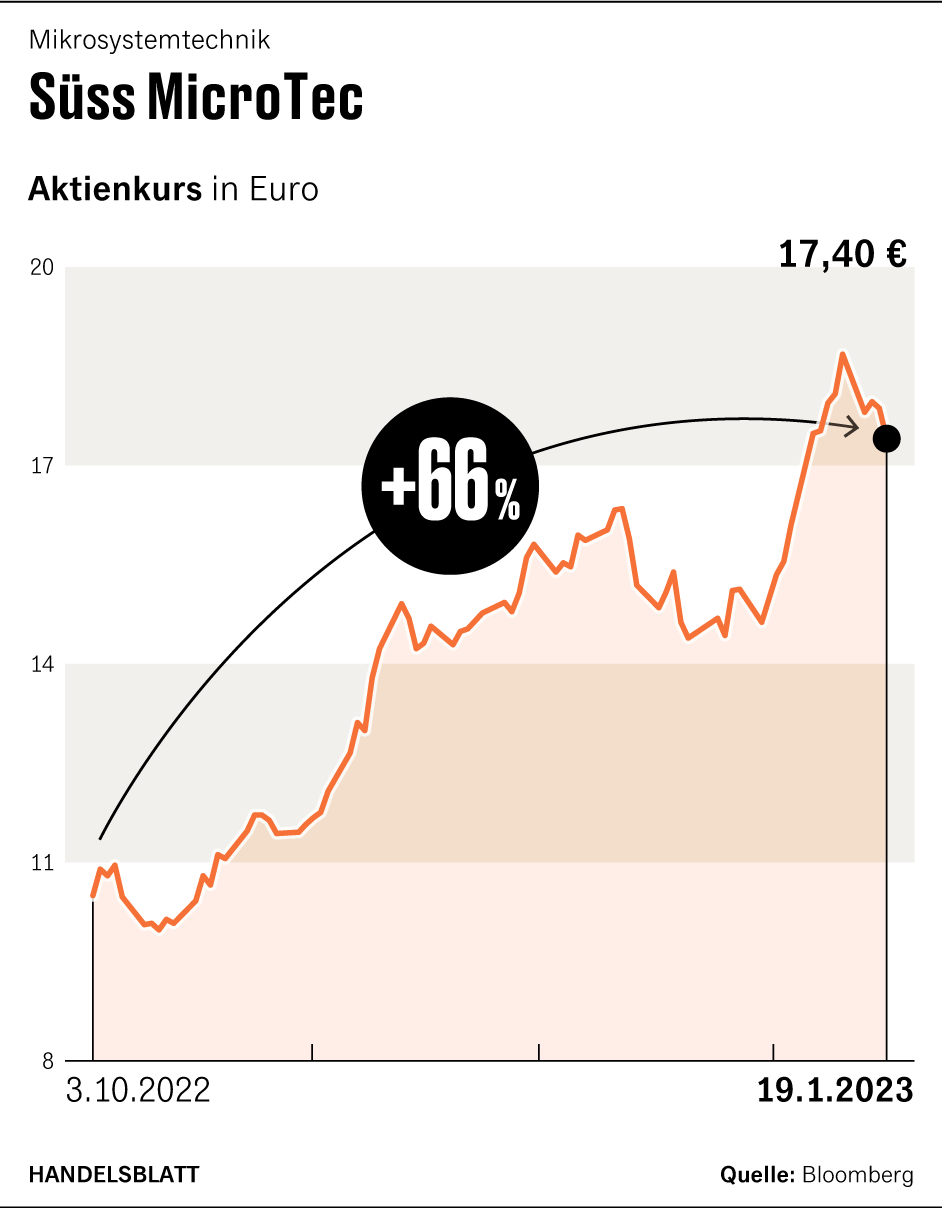 Süss supplies machines for various steps in semiconductor production. The focus is on the backend, the further processing of the chips. The Bavarians sell, among other things, so-called bonders, with which various components are connected in a housing. Süss also offers Microtec coaters. They are used to apply photoresist to the silicon wafers on which the chips are made.

Another important business area: Devices that can be used to clean the masks that are necessary for the exposure of the panes. They are used in the frontend, i.e. the actual semiconductor production.

Süss produced in the neighborhood of TSMC

The systems can be found in most modern chip factories. In the immediate vicinity of TSMC in Hsinchu, Taiwan, the Bavarians operate their own production. TSMC is the world’s largest contract manufacturer and technology leader in the industry. In addition to TSMC, Süss’ customers include Infineon, Germany’s best-known semiconductor manufacturer.

Süss benefits from the fact that more chip factories are being built worldwide than ever before. TSMC alone spent $36 billion on plants and machinery last year. This year it should be at least 32 billion.

According to calculations by the supply chain specialist Everstream, chip manufacturers in the USA want to invest around 122 billion dollars in new plants by 2025. Large factories are also to be built in Germany.

According to preliminary figures, sales last year climbed to 295 to 300 million euros, Süss announced at the beginning of the month. This corresponds to an increase of almost 15 percent compared to the previous year.

According to company information, analysts expected an average of 272 million. The EBIT margin is 8.5 to 10 percent, slightly more than the analysts’ estimate of 8.3 percent.

The goals are within reach

Süss is thus significantly smaller than Aixtron, Germany’s best-known chip supplier. The Aacheners are aiming for revenues of up to 500 million euros for the past year. The company is also much more profitable than Süss: Aixtron promises an EBIT margin of between 22 and 24 percent for 2022.

So Schulte has a lot to do. But the short-term CEO doesn’t just want to make Süss more profitable: “We will grow by opening up new markets with our technologies.” These include, for example, the cleaning of silicon discs, the so-called wafers, and solutions for the production of silicon carbide chips. Silicon carbide is a material that is becoming increasingly popular, especially for semiconductors in electromobility.

Schulte’s predecessor had set the goal of achieving sales of more than 400 million euros by 2025. If things continue to go up like they did recently, the company will easily achieve this. The targeted 15 percent EBIT margin also seems within reach.

If things go as planned, Schulte will resume his seat on the supervisory board in the fall. So far everything looks as if the interlude on the executive chair will be successful.
More: US group keeps its only German chip factory