The first trailer for the Super Mario movie is here!

Dusseldorf Industry is the largest gas consumer in Germany. Correspondingly high costs are now being faced by companies with the gas surcharge. For the energy-intensive industry alone, the so-called “balanced price adjustment” means additional costs of more than 5.3 billion euros, the industry association EID explained on Monday. For each job, there is an additional burden of almost 6300 euros.

The Trading Hub Europe joint venture announced the amount of the gas surcharge on Monday. From October 1, both household and business customers will have to pay 2.419 cents more per kilowatt hour (kWh).

“For months, the pressure on companies has been increasing due to the drastic price increases for electricity, gas and other energy sources,” criticizes the EID. From the steel industry to the automotive industry to the packaging industry, the energy-intensive industries in Germany consume 220 terawatt hours of natural gas per year.

The significant energy price increases for companies compared to the previous year have already resulted in additional costs running into the billions. The steel industry, for example, calculates that the gas levy that has now been set will add around 500 million euros a year.

“The gas levy increases the cost pressure that already exists due to the extreme price increases on the energy markets,” said Hans Jürgen Kerkhoff, President of the German Steel Federation. Natural gas is required in production to generate process heat.

Also read about the gas surcharge:

The record prices on the stock exchanges are to blame for the already high energy prices. As early as autumn of last year, the prices for coal, oil and gas had risen after the global lockdowns had eased with a sharp rise in demand.

The Federal Association for Building Materials expects additional costs from the gas levy.

Since the outbreak of the Ukraine war and the lack of Russian gas volumes, supply on the world market has once again become dramatically scarce. A megawatt hour of natural gas currently costs 206 euros on the Dutch TTF exchange for September. A year ago, the prices were just under 25 euros.

For individual companies, the surcharge now adds several million euros to the already high bill, depending on gas consumption. Take the paper industry as an example: According to the umbrella organization of the German paper industry, a factory uses an average of 170 gigawatt hours of gas per year. With an allocation of 2.419 cents, the additional burden is around 4.1 million euros. 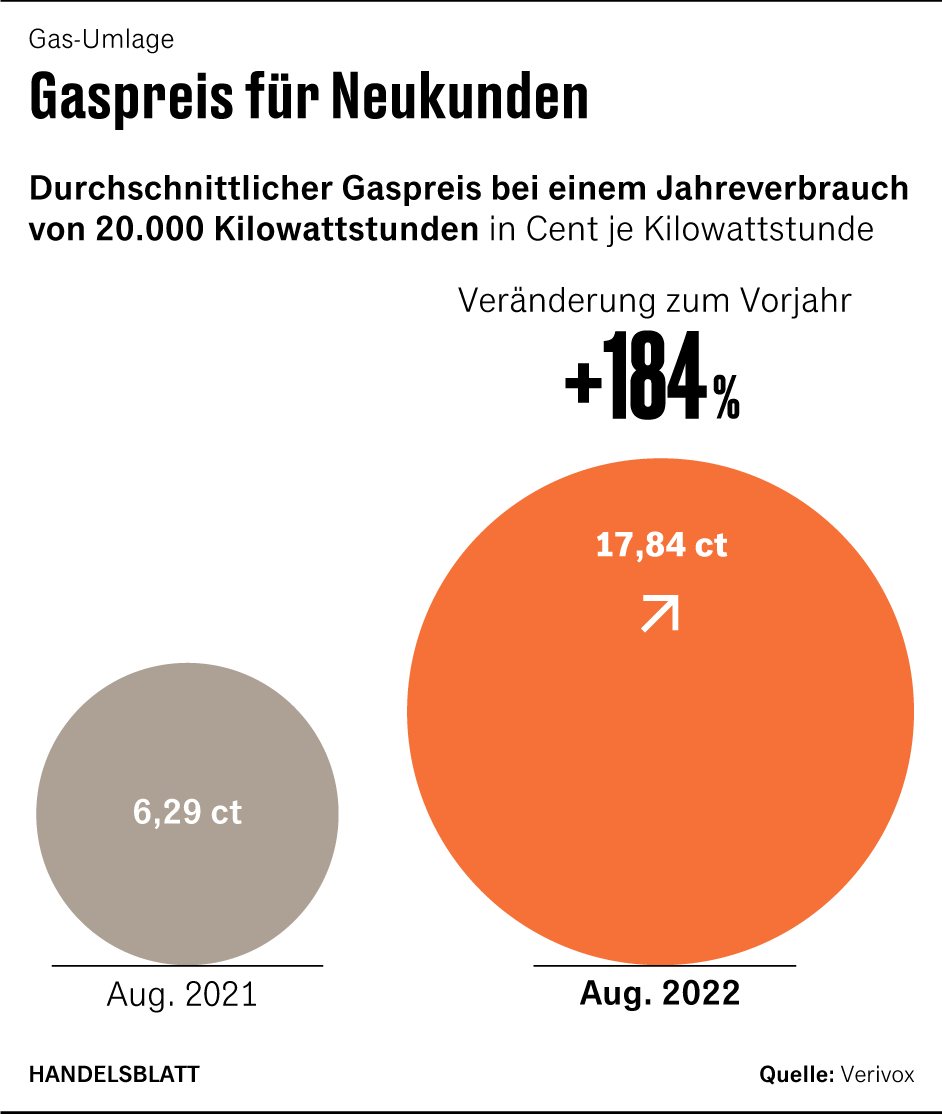 In order to maintain competitiveness and jobs, there must be an upper limit for companies with particularly high energy consumption, demands EID boss Jörg Rothermel. The aid should then come from the federal budget so as not to burden private households even more.

“The costs will overwhelm many companies.” Holger Loesch, deputy general manager of the BDI

“The announced gas surcharge of 2.419 cents per kWh means annual additional costs of around 375 million euros for the building materials, stone and earth industry,” calculates Matthias Frederichs, head of the Federal Association for Building Materials. He also calls for relief mechanisms “to stabilize industrial competitiveness” from the federal government.

Holger Loesch, Deputy General Manager of the Federation of German Industries (BDI), called for the levy to be extended beyond 2024: “Many companies will be overwhelmed by the costs,” he said on Monday.

More: Gas levy is 2.419 cents: That’s how expensive winter is

One of the legendary names in the game world Super Mariomoved to the big screen. There was an uncertainty about...