London/Beijing It is based in London but its chairman lives in New York. Most of its profits come from Asia, but the financial institution is regulated by the Bank of England. Its largest shareholder comes from China, its shares are primarily listed on the London Stock Exchange.

HSBC is the most globalized bank in the world – and in times of geopolitical tensions between East and West this is its undoing.

For more than six months, HSBC Chairman Mark Tucker and his management team have balked at calls for the bank to split along the geopolitical frontline and launch its Asian operations on its own.

“Our strength as a well-connected, global institute is the main reason why our major customers choose us,” CEO Noel Quinn constantly promotes the global structure of the major bank. A spin-off or spin-off of the Asian business, on the other hand, would entail huge one-off handling costs, higher taxes, higher running costs for the bank and possible regulatory setbacks.

However, Tucker and Quinn cannot ignore the restructuring requests, as they come from HSBC’s largest shareholder, the Chinese insurance group Ping An, which owns around eight percent of the shares. While the Chinese don’t see themselves as an “activist investor,” they have high expectations and staying power. Since they first floated the idea of ​​a split in late April, the Peter Ma-led group, which has close ties to the Beijing government, has gradually increased pressure on HSBC.

At the beginning of November, Ping An publicly discussed a spin-off of the Asian business for the first time. It will “support any initiative, including a spin-off, that will help improve HSBC’s performance and value,” Michael Huang, chairman of Ping An Asset Management, told various analysts and media outlets. Huang pointed out that the financial markets have been “rather disappointed with the poor performance of HSBC as well as dividends and market capitalization” in recent years.

HSBC achieves a lower return on equity than its competitors. The bank also lags behind the competition in important rankings, particularly in Asia. Since the region makes the largest contribution to business and profits, he is “concerned about the institute’s long-term and sustainable competitiveness” in these markets. Huang also criticized the underperforming operational performance. It is “urgent” that HSBC lowers its costs, which are well above the competition. 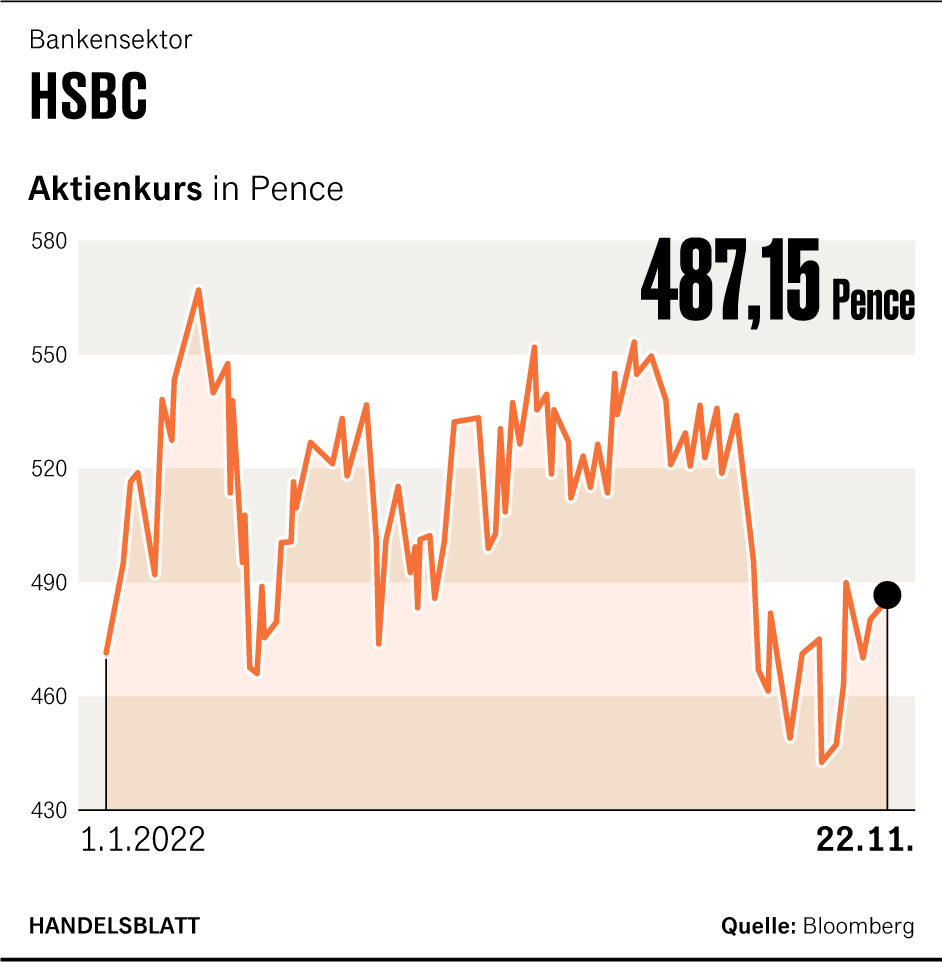 The message has arrived at HSBC headquarters in London’s Canary Wharf. The major bank recently put its Canadian business up for sale, which financial information service Bloomberg estimates could bring in up to $10 billion.

HSBC had already parted with private customer business in France and the USA last year. In mid-November, the Londoners merged their business in Oman with local provider Sohar Bank. “There are a couple of markets that I don’t think are very strategic and aren’t generating acceptable returns,” Quinn explained the transactions.

But the markets also see this as an admission that the global strategy is not that far off: “If they are now selling successful parts, such as Canada, then this indicates that the whole value of the global franchise is more Theory as reality,” speculates Edward Firth, banking analyst at investment house Keefe Bruyette & Woods. “I suspect that Ping An is making progress and that every part of the business outside of Asia is priced right now.”

However, the current divestments are not enough for the Chinese. “The sale of some small markets or companies will not fundamentally solve these problems,” says the major shareholder.

The most recent changes in management also indicate that there is a crunch in the boardrooms of HSBC. In October, Chairman Tucker surprisingly replaced CFO Ewen Stephenson and made Georges Elhedery his successor – making him the favorite to succeed CEO Quinn. Chirantan Barua, previously responsible for global strategy at HSBC, recently switched to competitor Lloyds Bank.

However, the tug-of-war between management and major shareholders is not just about returns and the share price, it is also about power politics. The Chinese still have a heavy stomach that HSBC had to cancel its dividend in the corona year 2020 under pressure from the Bank of England. Ping An was suddenly missing around 900 million dollars in the till. Since then, Hong Kong has felt that bank supervisors in London are not paying enough attention to the interests of HSBC shareholders in Asia.

HSBC Chairman Tucker has now promised to raise the dividend next year. He probably won’t be able to reassure his Chinese investors: “I’m not sure whether a little more dividends will appease an activist who refers to structural changes,” warned Joseph Dickerson, banking analyst at Jefferies International in London, in late summer .

More: Attack is the best defense: HSBC wants to prevent a split with good results

VALORANT player Soner Kent shared the delay problem experienced during the tournament on social media. The answer given by the...