Berlin Little can be expected from the traffic light in tax policy. The SPD and the Greens wanted to make top earners more accountable in the election campaign in order to relieve low-wage earners and the FDP to lower taxes for everyone. In the end, the explorations agreed not to do anything. Although the need for reform is great.

On the home stretch of the coalition negotiations, economists are now bringing a new proposal for a tax reform into play that, in their view, all three traffic light parties could live with.

Stefan Bach from the German Institute for Economic Research (DIW) and Tom Krebs from the University of Mannheim propose a reform of the income tax that would relieve 99 percent of the population, but would only lead to a relatively small loss of income. The proposal has been submitted to the Handelsblatt.

Bach and Krebs want to turn several screws in the tax system. They want to increase the basic tax allowance by 1300 to 11,300 euros per year. In addition, they want to change the collective bargaining system for lower incomes in such a way that low-wage earners are additionally relieved.

The top tax rate would be increased from 42 to 45 percent, but instead of starting at around EUR 58,000 gross annual income as it currently does, it would only start at EUR 67,000 in order to relieve middle incomes. The solidarity surcharge would have an allowance of up to 67,000 euros in income. That means: all taxpayers would only pay the surcharge on income tax proportionally to their income above this threshold. Today, top earners pay the solos in full. 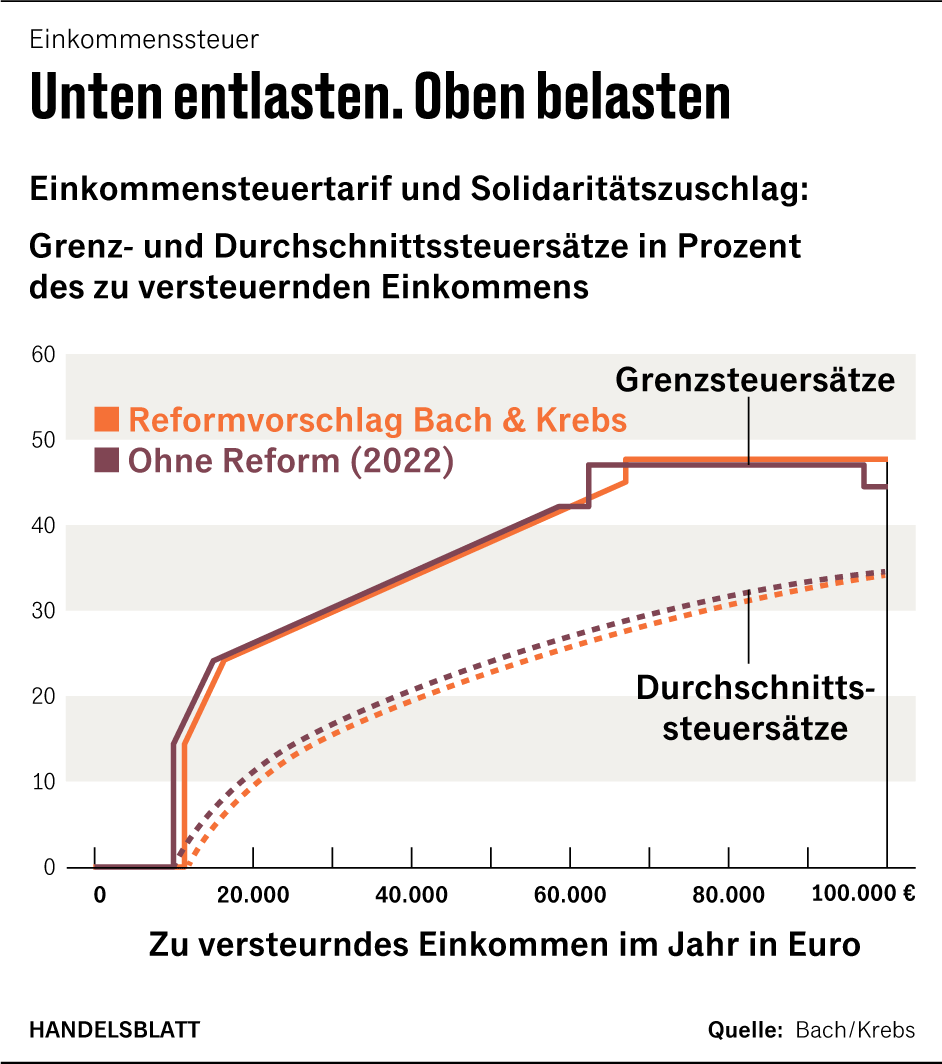 In order to finance the reform, Bach and Krebs want to burden the highest income percent more heavily. In addition to the higher top tax rate, an increase in the tax rate for the rich from 45 to 47 percent should help. This should also apply from an income of 200,000 euros, so far it is due from an income of 280,000 euros. A single with a gross salary of 195,000 euros would have to pay around 2000 euros more in taxes per year.

Compromise across the parties

However, the hope of Bach and Krebs is that the tax reform will partially finance itself. Since low-wage earners are likely to spend almost all of the money gained through the relief, indirect taxes could increase by around two billion euros.

Lower incomes could also work more, thereby increasing tax revenues by another half a billion euros. This means that the shortfall in income is now just under ten billion euros. According to Bach and Krebs, there is also a further counter-financing option to reduce tax breaks, especially in inheritance tax.

The SPD and the Greens should be able to live well with the proposal. Both parties had called for relief for low and average wage earners in their election manifestos, with simultaneous increases for the rich.

For the FDP, however, tax increases for high earners would not be negotiable. Bach and Krebs therefore also considered it feasible to forego the four billion euros in additional income from the higher taxation of the highest income in order to convince the liberals of the reform. The two economists are convinced: An overdue tax reform must not fail because of four billion.

More: The state can count on a strong tax increase by 2025

Apex Legends game director Chad Grenier, Respawn Entertainment leaving its body. One of the founding members of the company and...