Inflation is like an annoying visitor who wants to come in “just for a moment” and then just won’t get up from the sofa. Now there is a first small signal that the uninvited guest at least does not want to move in permanently: In October, producer prices, i.e. the prices that producers pay for primary products such as raw materials and industrial goods, fell again for the first time since May 2020, by 4.2 percent compared to September. This was mainly due to lower energy prices.

“The surprisingly sharp drop in producer prices could be a harbinger that we have passed the peak of inflation,” says Düsseldorf economist Jens Südekum. Inflation could “say goodbye faster than many thought”.

That’s what you always hope for with uninvited visitors. So when is it? The economic forecasters of the leading economic institutes do not expect the inflation rate to fall until the second quarter of 2023. After the surprising drop in producer prices, Südekum hopes things could go faster now.

Decoupling from China? Out of dependence on the communist regime in Beijing? That’s not an option for Volkswagen. In his first interview, Ralf Brandstätter, the Group’s new board member for China, says: “If we stop investing in the region now, we won’t play a role in this important market in three years.”

China is Volkswagen’s most important sales market. For decades, VW was the undisputed market leader there, selling 40 percent of its vehicles in China. But since 2019, the number of deliveries in China has been declining. One reason: the Wolfsburg company has so far only been weakly represented in the fast-growing electric car segment. 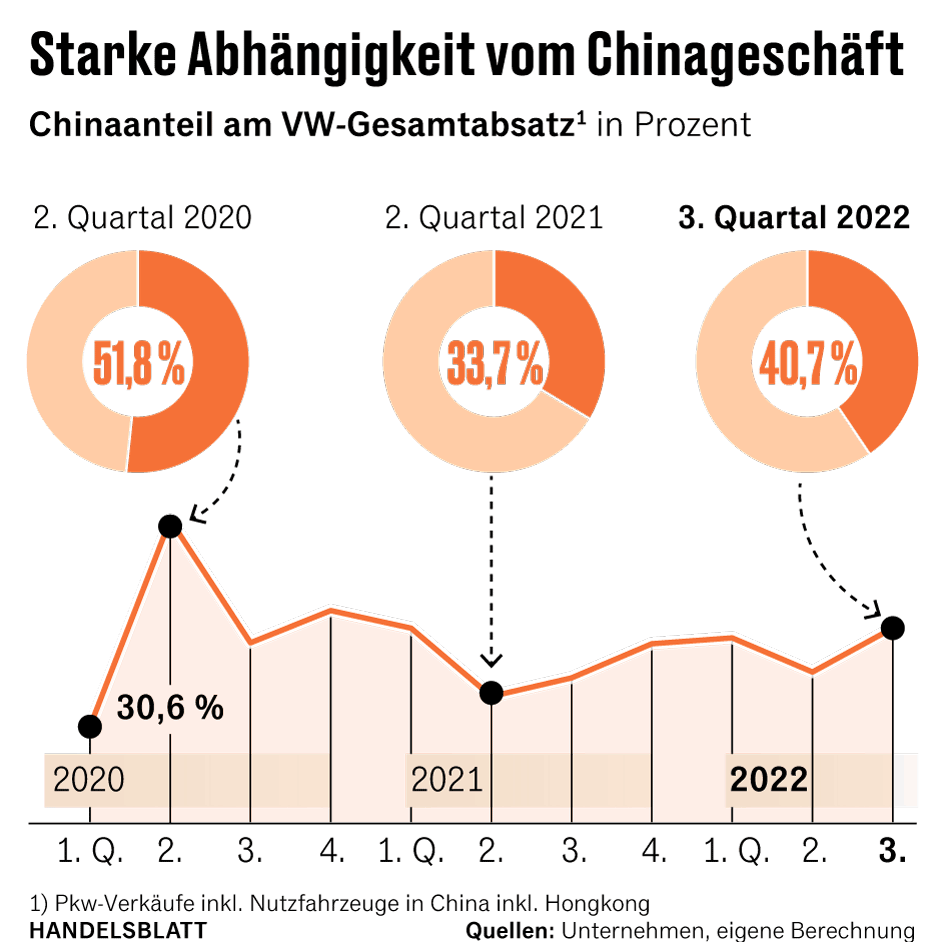 In order to get the problems under control, a manager with board rank has been in charge of the group’s important China business since August after a break of several years. Brandstätter was previously the head of the VW brand. Brandstätter turns the tables: There can only be greater independence from China if Volkswagen has enough money. “We earn a large part of the funds required for this in China.”

So at Volkswagen, the path to less China leads through more China. This is advanced management dialectics. And Brandstätter, another top manager who rejects the idea of ​​decoupling in China. BASF boss Martin Brudermüller made a similar statement in the Handelsblatt last week.

Bertelsmann boss Thomas Rabe had to admit on Monday evening that investments in the USA are not always easy: The planned billion-dollar takeover of the US publisher Simon & Schuster by the Bertelsmann subsidiary Penguin Random House has finally failed. The Gütersloh-based media group announced that – contrary to what was originally planned – it would not appeal against the judgment of a US court. At the end of October, the court prohibited the planned merger of the two publishers for reasons of competition. Penguin Random House is the largest trade book publisher in the world. Bertelsmann now has to pay the designated seller $200 million in compensation because the deal fell through.

The top report in ZDF’s “Heute Journal” yesterday was the dispute over the captain’s armbands with the “One Love” motif, which the world football association does not want to allow in homophobic Qatar. Certainly an important topic.

For the future of the West and its values, however, another report from Qatar could be a bit more relevant: The world’s largest liquefied natural gas producer Qatar Energy and the Chinese state-owned company Sinopec signed an agreement on Monday to export 108 million tons of liquefied natural gas (LNG) over 27 years – and thus one of the largest gas supply contracts ever.

The agreement with China is “the longest-running supply agreement in the entire LNG industry,” said Qatar Energy boss Saad Sherida Al-Kaabi, hitting the sore spot for Germany: Economics Minister Robert Habeck (Greens) said during his visit agreed an energy partnership with Qatar in Doha in March. But since then, no German-Qatarian delivery agreement has come about.

Germany, on the other hand, wants to accept contracts for a maximum of five years because of the planned phase-out of fossil fuels. Qatar, meanwhile, insists on long-term agreements because of the forthcoming investments in the expansion of gas production.

The former federal health minister Jens Spahn is working on his own relaunch as the Union’s head of economic policy. For this he has modified a historic motto: Spahn speaks of “property for everyone”. This is deliberately close to the “prosperity for all” that Ludwig Erhard promised after the Second World War. Spahn is concerned with issues such as the share pension, with which employees should participate in productive capital, and easier ways to own a home.

However, Spahn should not exaggerate with the Erhard reminiscences: In the CDU, the Economics Minister and short-term Chancellor Erhard was considered an outsider throughout his life, notorious for chaotic administration and excessive presentations.

I wish you a day when everyone keeps it short.

hp: That Handelsblatt interview with Wolfgang Schäuble there has been some excitement over the past week. “Bild” saw it as an “ice-cold reckoning with Merkel”. In the interview, Schäuble said, among other things: “It is perhaps too early to make a definitive assessment of whether Mrs. Merkel will be classified as one of the great chancellors. What is remarkable, however, is that even now, with regard to Russia, she cannot say that we made mistakes.”

What do you think: was Merkel a “great chancellor”? What political decision by Merkel will be remembered by future generations? Write us your opinion in five sentences [email protected]. We will publish selected articles with attribution on Thursday in print and online.