Berlin Not so long ago, how great were the promises to finally lead Germany into the modern age. The traffic light coalition agreement contains many well-sounding formulations such as “digital awakening” or more specifically: “We are promoting comprehensive digitization of administration.”

Formulations that made business sit up and take notice, because after all, companies are even more dependent than citizens on effective administration and fast internet.

But after a year of traffic light government, the disappointment is great. The digital progress that the Progress Coalition proclaimed has almost completely failed to materialize. The federal government is now waiving a time frame for the digitization of administration. The expansion of fast internet is not progressing as quickly as hoped.

Accordingly, the assessment of the digital policy of the traffic light is devastating. This is the result of the Digital Report 2023 of the European Center for Digital Competitiveness of the ESCP Business School and the Institute for Demoscopy Allensbach. The vast majority of Germans no longer trust any party to really advance digitization in any significant way.

A major setback, especially for the FDP, which presented itself as a digital party in the election campaign and which, with Digital and Transport Minister Volker Wissing, holds the most important office in this area. Although the Liberals still lead the rating with 16 percent approval, they have lost around 13 percentage points since 2021. 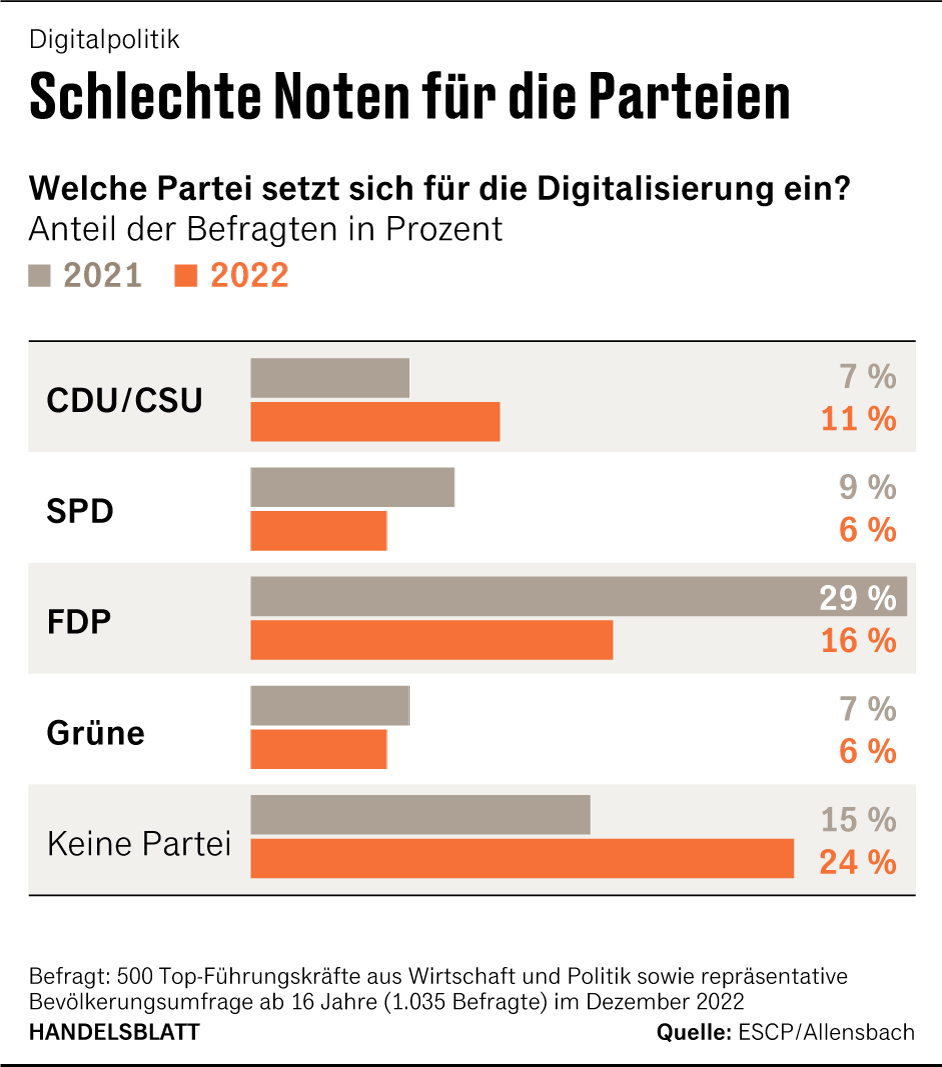 The results are based not only on a representative population survey, but also on surveys of 500 people from politics and business – including managing directors and ministers.

Almost everyone sees Germany lagging behind

The assessment of the German Association of Small and Medium-Sized Enterprises (DMB) also shows that the frustration in business is particularly great. “After a good year of traffic light government, digitization in Germany has not really picked up speed and, despite all the political commitments, has not become a top priority,” criticizes Marc Tenbieg, Managing Director of the DMB. The medium-sized companies therefore share the bad grades for the current digital policy of the federal government.

Companies that would have digitized many business processes in the last few years of the corona pandemic would be slowed down by a poor network infrastructure. Tenbieg’s conclusion is therefore sobering: “The government’s ambitious digitization goals have not even come close to being achieved.”

>> Read here: How the legal republic is slowing down digitization

Concern for Germany as a business location is caused above all by a different conclusion of the digitization study. According to this, almost all respondents (96 percent) are of the opinion that Germany is lagging behind in digitization. Four years ago, this value was still 89 percent.

“Back then I actually thought it couldn’t get any worse,” says Philip Meissner, professor at the ESCP Business School and co-author of the study. What is new is that the respondents hardly had any hope that anything would improve.

Only 15 percent of the top managers attest that the new government is pushing digitization forward more decisively, 83 percent have the impression that the hoped-for impetus has not materialized.

At the same time, however, digitization is recognized as a main factor for international competitiveness. A big problem, because as Marc Tenbieg from the Association of Small and Medium-Sized Enterprises states: “Germany is lagging behind more and more in a European and global comparison.”

The authors of the study recommend a number of central measures so that the backlog can be made up at all. This includes the fact that the digitization of administration must actually be pushed ahead across the board. According to the Regulatory Control Council, only 33 of 575 services are available online so far. This requires a simple and central portal for all state services – i.e. from dog tax to business registration.

In addition, visa procedures for IT specialists must be simplified and Germany must seize the opportunity of green technologies and massively start funding here. Because, as ESCP Professor Meissner predicts: “Green Tech is the technological growth area of ​​the next few decades.” A future area in which Germany should not lose touch.