No role model for Ukraine

After a deflagration, the Rehden gas storage facility returns gas to the grid

Munich Orders are still being placed with the Dutch chip supplier ASML: “Our order backlog is 40 billion euros, we’ve never had that before,” said ASML boss Peter Wennink on Wednesday. Europe’s most valuable tech group will grow strongly this year. Wennink adds: “Demand is still much higher than our capacities.”

The company leader promises a sales increase of more than 25 percent in the current year. This is a much faster upward trend than in 2022, when revenues rose by 14 percent. The ASML boss announced that 2023 would deliver significantly more chip manufacturing systems than last year.

Despite the good prospects, Wennink warned against euphoria. Rising interest rates, high inflation and geopolitical tensions are currently leaving their mark on the chip producers, i.e. the customers of ASML. “The utilization of our machines in the factories is falling because customers are reducing their inventories.” However, this trend will reverse in the second half of the year, predicted Wennink. Last but not least, the end of the Covid restrictions in China is contributing to this.

There is a reason why the currently poor business of semiconductor manufacturers is not reflected in sales: “Customers assume that the recession will be much shorter than our delivery times.”

With its so-called EUV machines, ASML is an indispensable supplier to the chip industry. EUV stands for extreme ultraviolet light, with which the semiconductors are exposed. Only this technology makes it possible to produce chips of the latest generation with structure sizes of less than seven nanometers. Worldwide only ASML masters this procedure.

However, this technology has brought ASML into the focus of politics. Under pressure from the USA, ASML has not been allowed to deliver EUV machines to China for years. That still applies, explained Wennink on Wednesday. At the beginning of October, the US government announced that it would restrict the export of chips and production equipment to the People’s Republic even more than before. The scope for exports to the country is thus becoming ever smaller. However, nothing has changed for ASML up to now, explained Wennink. The company supplies systems to China that are technologically less sophisticated than EUV.

Earlier this year, Dutch Prime Minister Mark Rutte spoke to US President Joe Biden about the sanctions. However, it is still unclear how things will continue. America is trying to get the Netherlands on its side and further restrict exports. “We now have to wait until the governments and politicians find a reasonable solution,” said Wennink. China is an important market for ASML: the group achieved 14 percent of sales with new systems in the People’s Republic last year.

It would be even worse for ASML if the conflict between China and Taiwan escalated: More than 40 percent of sales of new systems come from Taiwan. The world’s largest contract manufacturer in the chip industry, TSMC, is the Dutch company’s key customer.

>> Read here: This is how the semiconductor researchers in Belgium are shaping our future

TSMC is growing rapidly, but has also become a little more cautious recently. The group has just announced that it will invest between 32 and 36 billion dollars this year. At the lower end of the range, this corresponds to a drop of around ten percent compared to 2022.

The share price has climbed by about a fifth in the past three months. On Wednesday, investors took profits, the papers were listed slightly below the previous day at around 607 euros. However, the shares are far from the all-time high in autumn 2021. At that time, investors paid 760 euros for a share. 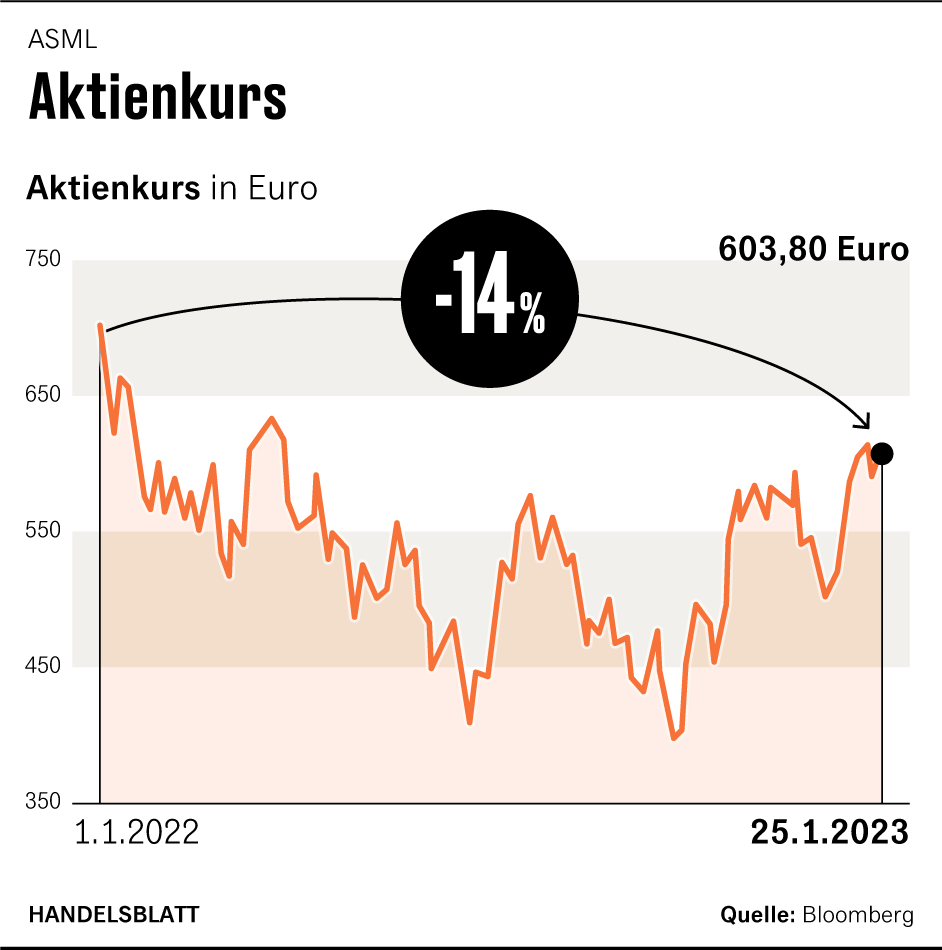 The analysts at Goldman Sachs are now assuming that the share certificates will climb back to 750 euros within a year. ASML is worth around 240 billion euros on the stock exchange, which is over 100 billion more than SAP, the most valuable German tech group.

Wennink asserted that his company’s long-term prospects were excellent. Because chips are being used in more and more areas of modern life. The group is expected to achieve sales of up to 60 billion euros by 2030.

Reconstruction Ukraine The 1948 reconstruction program is regarded as the blueprint for post-war Ukraine because it acted as an "igniter"...

After a deflagration, the Rehden gas storage facility returns gas to the grid