new York By the time Melissa Byrne graduated from the University of Pennsylvania in 2004, she was barely keeping track of her student loans. Liabilities totaled approximately $85,000 from private and government lenders. The payments went through different portals at different interest rates. When asked about the amount of her debt, she lied at the time: “Shame is a huge issue when it comes to debt.” Added to this was the financial burden. “I had a loan to pay and I couldn’t afford to put gas in my car,” Byrne recalls.

Today, Byrne is an activist for the waiver of student loans – “Loan Forgiveness” – in the USA. The issue is high on the agenda in the White House. Because it’s about a lot of money and ultimately also about the purchasing power of millions of Americans.

At more than $1.6 trillion, student loans add up to more personal debt than, say, auto loans or credit card debt. As of early 2022, more than 43 million Americans had debts to the US Department of Education, which provides means-tested, fixed-interest government college wages to students and their parents.

The US government has been putting off the problem for almost two years now. At the beginning of the pandemic in spring 2020, debtors were exempted from servicing their loans or making payments. Since then, the moratorium has been extended six times – twice by Donald Trump, four times by Joe Biden. Borrowers have saved around $195 billion in payments so far, according to the New York branch of the US Federal Reserve.

The Biden administration inherited the measure from its predecessor Trump. The current extension expires on August 31. A decision as to what should happen afterwards is urgent. The president could announce a long-awaited write-off of some or all of the debt — or delay the decision further and extend the payment freeze deadline again.

Biden set the financial hardships of American graduates as a campaign issue early on. He knows the problem, personally, too, he told a student in New Hampshire during the 2020 election campaign. He, too, had just paid a total of $280,000 in education debts from his children: “I get it,” he said. He promised borrowers he would forgive at least $10,000.

Now the expectation is growing that the US President will follow up with action. That could become vital for the Democrats. Control of Congress is at stake in November’s midterm elections – and the young electorate could regain influence. In the last congressional elections in 2018, turnout among 18 to 29 year olds rose dramatically from 20 percent to around 36 percent – ​​the strongest increase of all voter groups.

But what would such a step look like? Congress could introduce a bill. US President Biden is ready to sign into law a debt haircut of $10,000 per borrower at any time, stressed press secretary Jen Psaki at a briefing in the White House in late April. The progressive Democrat camp, however, is calling for a much larger haircut of at least $50,000 per borrower.

After all, a $10,000 waiver would completely pay off the loans of around 15 million Americans – around 65 percent of the more than 40 million debtors would then still have liabilities to the state. If $50,000 were forgiven, that would relieve up to 76 percent of debtors.

The split in the democratic camp makes an agreement unlikely. Instead, Biden could settle the matter through an executive order, i.e. a binding presidential decree. Whether and to what extent he has the authority to take such a step is currently being examined, Psaki explained.

Biden emphasizes that he always wants to ensure that a haircut does not relieve the super-rich or higher income brackets. A salary cap of $125,000 a year is therefore under discussion, reports Bloomberg.

Economist Adam Looney from the Brookings think tank also warns that debt relief could have regressive effects. Student loans would be forgiven, money would be redistributed particularly to the better off, namely college graduates. But the argument is only partially valid, as findings from the Roosevelt Institute think tank suggest. In particular, people in the lower income brackets are the ones who have to take out student loans in the first place. The researchers working with economic sociologist Charlie Eaton therefore need not be afraid of preferential treatment for those who are better off.

The Republican camp, however, rejects any relief in its entirety. The state should not burden the taxpayer with the personal financial decisions of individuals. Republican Senator Mitt Romney tweeted: “Desperate poll numbers call for desperate action: Democrats want trillions in student loan debt forgiven. Why not cancel debt on car loans as well? Or credit card debt? Or mortgages?”

>> Read here: “Biden is destroying our country”: Inflation becomes the biggest problem for the US president in the election year

Activist Byrne stands by her call for all outstanding government student loans to be waived completely. “Rich people don’t have to compromise when it comes to their dignity,” she says. The costs of higher education should be borne for generations to come – a central theme of left-wing Senator Bernie Sanders’ campaign.

So there is agreement that something has to happen soon. According to a survey by the Harvard Kennedy School, 85 percent of respondents between the ages of 18 and 29 call for a decision to be made soon on the issue of student debt. However, only 38 percent are in favor of a complete waiver of the loans.

A decision is also urgent because the problem threatens to increase in the coming years. Tuition fees have more than doubled since the early 1990s, according to College Board figures. Students paid around $4,160 a year for state universities 30 years ago; today, adjusted for inflation, it’s around $10,740. Private universities account for even more, with average fees averaging $38,070 per year, up from $19,360 30 years ago. 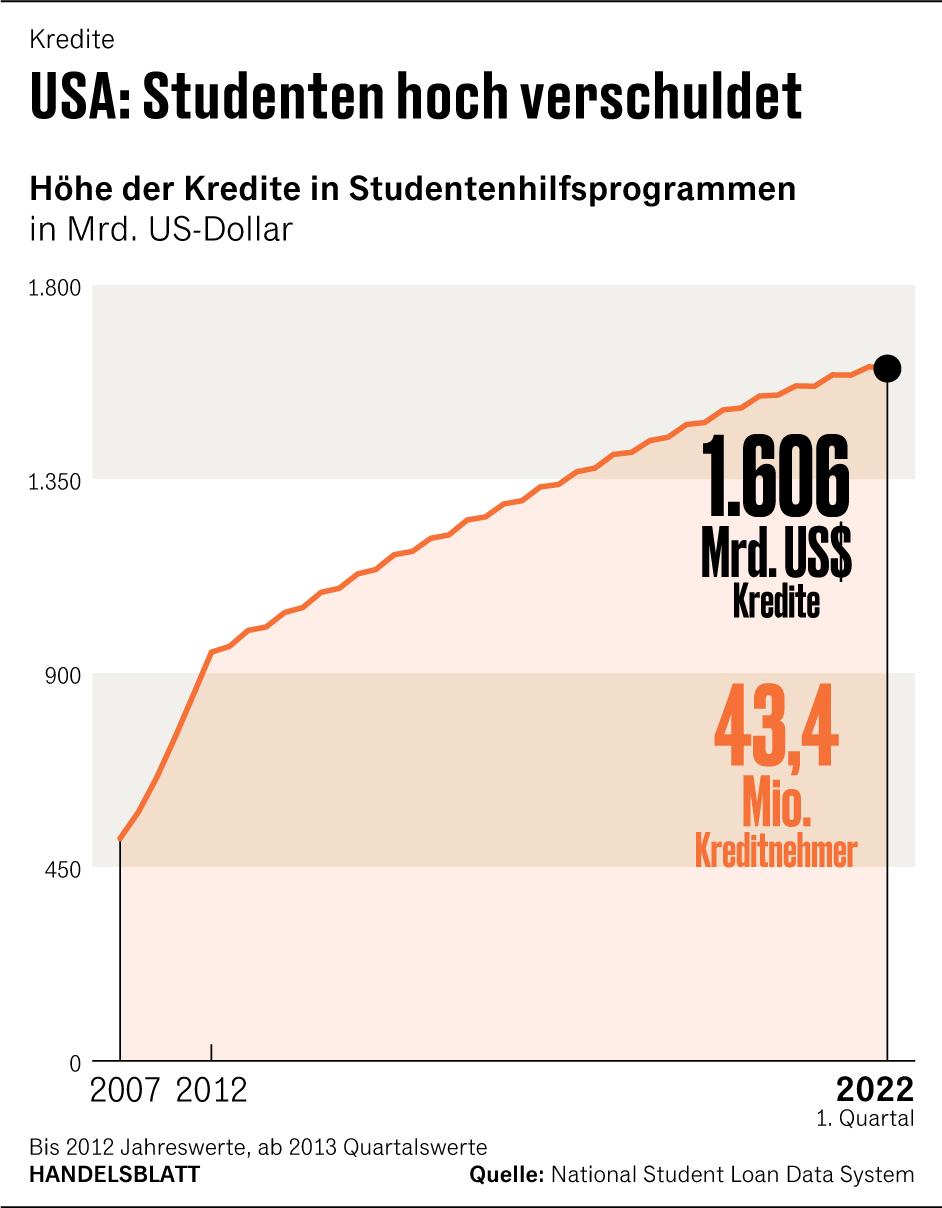 This is also due to the financing models of the universities. While the state and local governments used to contribute around three-quarters of the funding for educational institutions, universities are now financed around half by tuition fees.

The higher educational path is therefore an increasing burden on private households. While borrowers owed around $5,000 on average 30 years ago, today it is around $37,000.

Students and their parents can also take out loans with virtually no upper limit. Diana Angstgott-Roth of George Washington University argued to the US stock exchange broadcaster CNBC that this means that universities can charge ever higher fees. The state should therefore completely withdraw from financing higher education.

Repayment is a long road for many graduates: on average, they pay off their loans for 17 years. According to education expert Mark Kantrowitz, a trend reversal is not in sight. The developments could mean that the debt mountain could exceed the three trillion dollar mark in the next two decades, he calculated to CNBC.

More: Many students are excluded from the funding from the outset. Experts are calling for rapid reforms and putting pressure on Minister of Education Stark-Watzinger