Gold May Be At These Levels Next Week!

Frankfurt Prices in Germany continue to rise rapidly. In November, the inflation rate in this country was 5.2 percent, as the Federal Statistical Office announced on Monday based on a preliminary estimate. That is the highest level in more than 29 years. Most recently, prices rose so sharply during the boom after reunification in 1992.

Economists had predicted an increase to 4.9 percent for the past month. The consumer price index in Germany had already increased by 4.5 percent in October. In November, rising energy prices were by far the biggest driver of inflation. They increased by 22.1 percent compared to the previous year. Food prices rose by 4.5 percent, services by 2.8 percent and rents by 1.4 percent.

The European Central Bank (ECB) attributes the increase mainly to temporary factors. In addition to delivery bottlenecks and catch-up effects in consumption, this also includes the reversal of the VAT cut from last year. In addition, the price of oil fell sharply last year due to the pandemic. Compared to the low values ​​of the previous year, it is now significantly higher. The central bank believes that this effect will probably weaken when the comparative values ​​are higher again.

The Council of the European Central Bank is divided

ECB boss Christine Lagarde recently reiterated her view that she considers the rise in inflation in the euro area to be temporary. However, there are also representatives within the Governing Council who warn against underestimating the dangers of inflation. The Austrian central bank chief Robert Holzmann said that he would not bet a lot of money on inflation in the euro area falling below two percent again next year.

Economists assess the dangers of inflation differently, but mostly assume that the current values ​​are not permanent. Greg Fuzesi of JP Morgan writes about the latest collective bargaining agreement in the public sector: “There is still no second-round effect in the rise in inflation.”

Many economists and the ECB itself see it as crucial whether wages rise significantly in response to inflation and thus the danger of a wage-price spiral arises, as is still remembered from the 1970s. So far, the data does not provide that. Fuzesi sees an average wage increase of two percent for Germany and less than 1.5 percent for the entire euro area.

Commerzbank expert Marco Wagner refers to a number of special effects from the pandemic with a view to the latest inflation figures. “But now prices are rising more sharply across the board,” he warns at the same time. He assumes that inflation will fall again in the coming year once the special effects no longer apply. “But it should settle at a higher level than before the corona pandemic,” he expects.

Michael Heise, chief economist at HQ Trust, believes inflation of 3.0 to 3.5 percent for the coming year is “realistic”. Among other things, he refers to the increase in gas prices recently announced by numerous utilities. Jan Viebig, chief investor at Oddo BHF, assumes that the ECB will have to raise its own inflation forecast significantly in December. These forecasts are updated once a quarter.

The chief economist at KfW, Fritzi Köhler-Geib, is more relaxed about the figures. “For the coming year, I can see light at the end of the tunnel,” she says. It is very likely that inflation will gradually recede and fall below the two percent mark in mid-2022. The ECB is aiming for two percent as an inflation target for the euro area in the medium term.

Christoph Swonke, economic analyst at DZ Bank, expects a clear easing in 2022 and thus a price increase of 2.2 percent for the coming year as a whole. 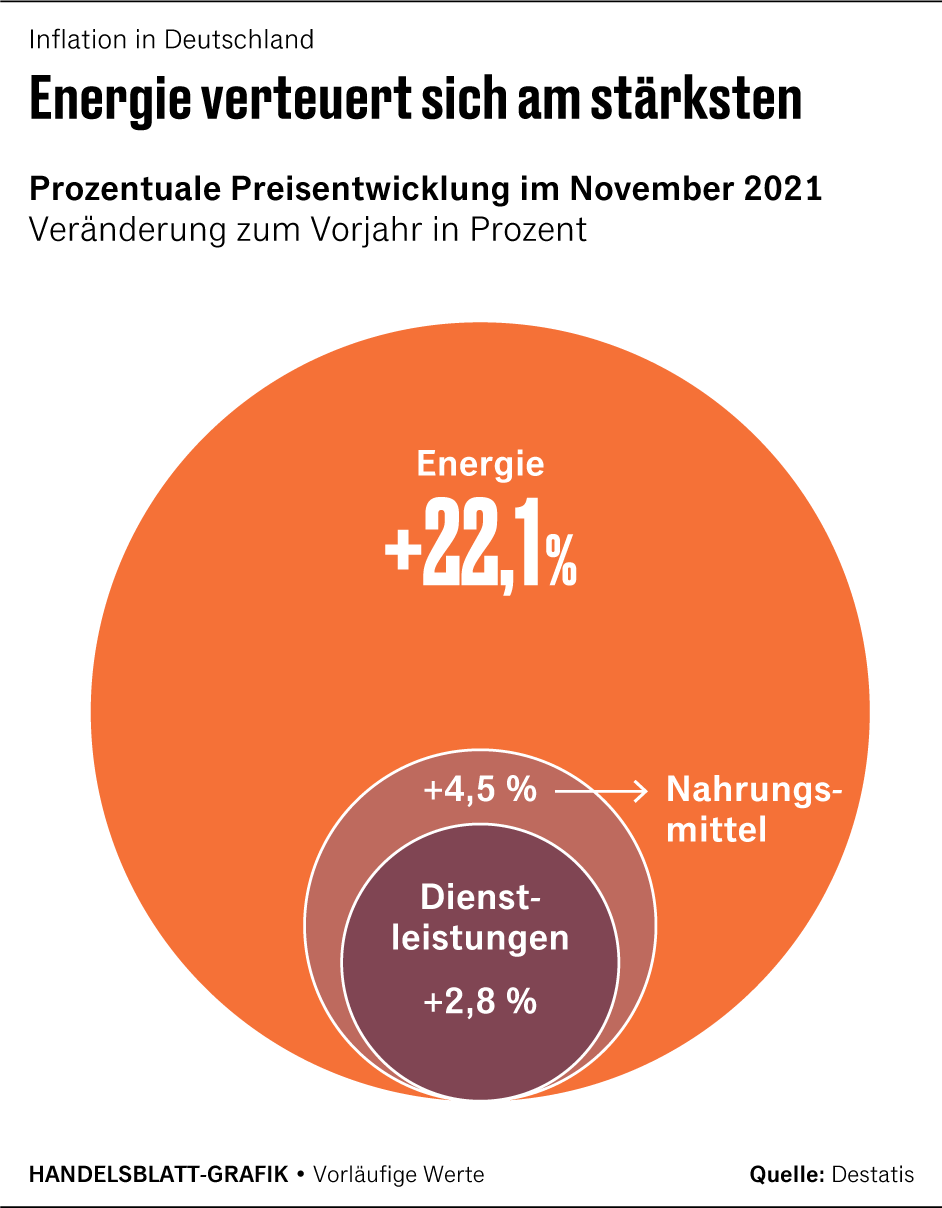 Whether the rise in inflation is temporary or sustained plays a decisive role in the monetary policy stance of the ECB. In December, the central bank will decide how to proceed with its massive bond purchases in the next year. Some council members recently urged a faster streamlining. Holzmann, for example, expressed the expectation that all net purchases by the ECB could expire next autumn.

Lagarde had already admitted at the last press conference that inflation appears to be more persistent than was assumed a few months earlier. At the same time, however, it has very clearly rejected speculation that an interest rate hike could occur relatively quickly. The key interest rate is currently zero, the deposit rate, which is currently more important in practice for commercial banks, is minus 0.5 percent.

Like most other central banks, the ECB has repeatedly emphasized that bond purchases should first fall to net zero before an interest rate hike can be considered. In the meeting on December 16, she is expected to announce the form in which the pandemic emergency program (PEPP) is to be ended.

In addition to this, the program known under the abbreviation APP continues to run with net purchases of 20 billion euros per month. Such programs usually run out over months. Representatives of the ECB also recently emphasized that no increase in interest rates is to be expected in 2022.

For a long time, however, the markets had priced in a relatively early rate hike. Lagarde has rejected this. She later emphasized again that the ECB was monitoring price developments very closely in order not to appear overly indulgent to high inflation. With the advent of the new corona variant, however, the foreseeable expectations from the markets of a rapid rate hike have fallen.

The uncertainty about the development of inflation is also so great because there has never been a situation comparable to that caused by the pandemic. Supply bottlenecks and catch-up effects in consumption come together. Even if these factors are temporary, it is difficult to assess what dynamism will result from them. This poses major challenges for the ECB and the central banks in the euro system, because their forecasting models are heavily based on data from the past. Even in comparatively normal times, the forecasts were often wrong. In the past, the ECB has mostly overestimated inflation – since the pandemic, however, it has underestimated the development. In the United States, inflation had already reached 6.2 percent in October.

The US Federal Reserve is likely to react more quickly

Jerome Powell, head of the US Federal Reserve (Fed), had repeatedly stressed that the price hike was temporary. He also had to admit that the trend is apparently going on longer than expected. The US Federal Reserve is, however, much closer than the ECB to an initial hike in key interest rates.

The Fed has announced that it will reduce its bond purchases to net zero by the summer, so that only expiring paper will be replaced. After that, the way would be free for an interest rate hike. In some cases, experts even expect several interest rate hikes in 2022. Goldman Sachs is forecasting three rate hikes, but admits that market data currently shows lower expectations.

All central banks – also because of the new corona variant – have to deal with the risk of stagflation, i.e. a combination of inflation and weak growth. You can make two mistakes that lead to this development: The first mistake would be to tighten the policy too quickly, which weakens the economy and still cannot trap prices. The second would be too late a tightening after the second-round effects continue to push prices even in the downturn.

The gold market surprised this week with a break above $1,830. Analysts say that next week will be crucial if...