BtcTurk Donates More than 6 Million for Earthquake in Turkey

Bitcoin Has Golden Cross! What’s the Next Destination?

These Are the Top 10 Artificial Intelligence Coins! – Cryptokoin.com

Berlin Driving has become an expensive pleasure in the past year. Both the prices of new and used cars have reached a new all-time high in Germany in 2022. This is what Deutsche Automobil-Treuhand (DAT), the market research company for the automotive industry, writes in an analysis published on Thursday.

“Due to the low supply and high demand, new and used cars have become enormously expensive,” says the report. An average of 42,790 euros had to be put on the table for a new car last year. This is an increase of 13 percent compared to 2021.

The DAT describes 2022 as an “exceptional year” for the entire automotive industry. Manufacturers and retailers not only suffered from the general inflationary tendencies. The unexpectedly persistent shortage of chips has further reduced the range of vehicles and resulted in strong price increases.

For example, the Wolfsburg-based Volkswagen Group initially expected that almost nine million cars could be sold worldwide, as in 2021.

At the end of the year, however, Europe’s largest car manufacturer was in a much worse position with almost 8.3 million vehicles sold. After all, there is growing hope in the automotive industry that the recovery hoped for twelve months ago could begin in 2023.

It is becoming increasingly difficult for younger car buyers with less money to find an affordable used compact car. A look at the development of the price segments shows this. In 2019, i.e. the last comparatively normal year before the outbreak of the corona pandemic, around 44 percent of all used cars in the segment up to 10,000 euros were traded.

In comparison, the figures for 2022 show an inverted car world: the cheap used cars up to 10,000 euros only account for a share of 23 percent. The middle price segment has remained almost unchanged at 31 percent. But meanwhile, the expensive cars, which cost more than 17,500 euros, represent the largest share of all traded used cars with a share of 46 percent.

There was also greater demand for used vehicles last year because there were fewer new vehicles. Anyone who has looked in vain for a new car has inevitably switched to the used market.

As can be seen from the DAT report, 13 percent of all vehicle owners surveyed canceled a vehicle purchase they had planned to buy last year due to a lack of availability. 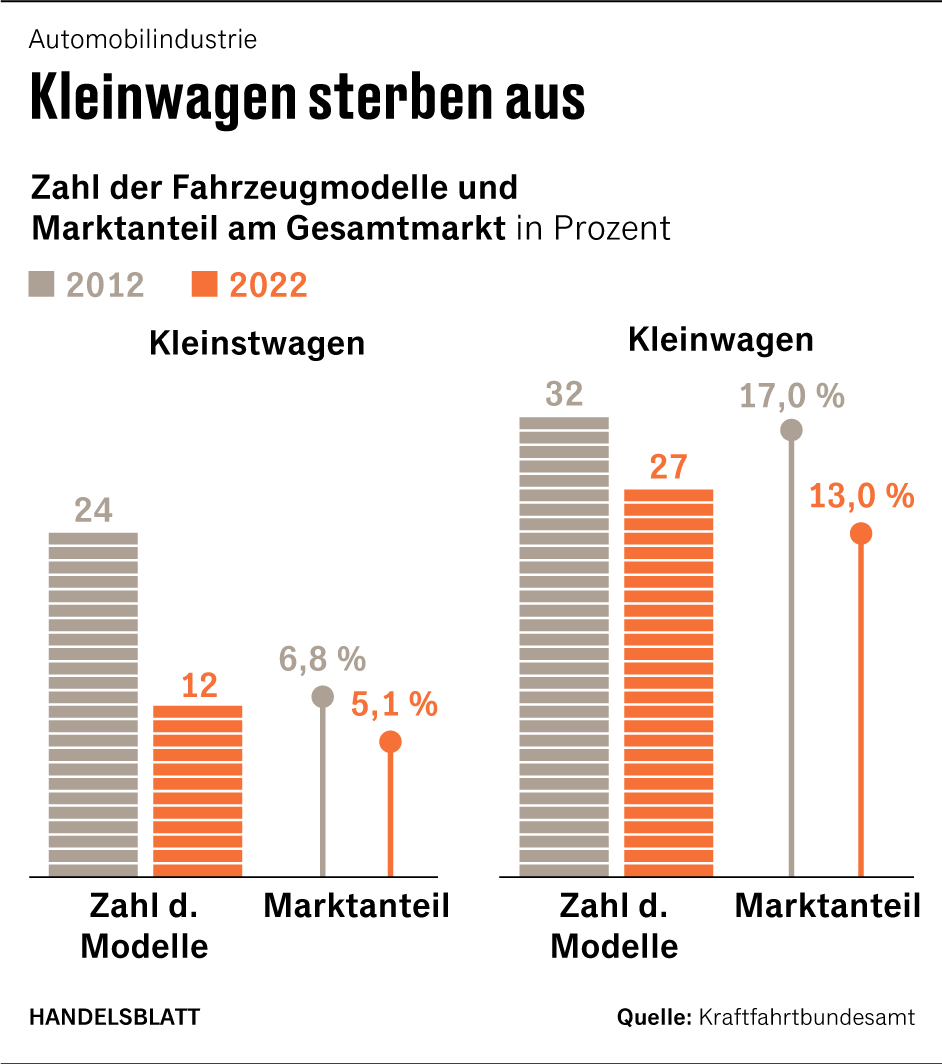 A look at the “transfers of ownership” also shows how badly the car market suffered from the lack of supply last year. If a used car is sold, the new owner must be entered in the vehicle documents. The number of these changes of owner therefore represents the entire volume of the used car trade.

>> Read here, why the gap in the small car segment is so big.

For 2022, the statisticians counted around 5.6 million transfers of ownership in Germany. Compared to the previous year, this is a minus of around 16 percent and corresponds to the level of 1985.

The scarce supply and the high prices are also responsible for this: if you couldn’t get hold of a new or used car, you simply kept your existing vehicle. Therefore, the number of transfers of ownership had to decrease.

Figures from the DAT report confirm this. Since 2020, i.e. the start of the corona pandemic, Germany’s drivers have been more concerned with having their vehicles serviced and repaired. “Since it was almost impossible to buy cars at the beginning of the pandemic, investments were made in maintenance and repairs,” it says.

of the vehicle owners surveyed had to postpone their planned vehicle purchase due to a lack of availability, as the DAT report shows.

Basically, for the entire automotive industry, the susceptibility to repairs for most models has been decreasing for years. So if the number of workshop visits has increased overall, it must be additional visits due to upcoming maintenance work – justified by the longer retention times of the cars.

According to analysts, the price increase for new and used cars could possibly stop in the year that has just begun. “2023 will be a car year with significantly better delivery times, greater production and therefore greater competition and higher discounts,” expects automotive professor Ferdinand Dudenhöffer from the Duisburg CAR Institute (Center Automotive Research).

>> Also read: Why Tesla is cutting prices so much

The semiconductor crisis is coming to an end, which is why more cars will be produced again in 2023, according to Dudenhöffer. In the future, the car manufacturers could only use their high capacities with price reductions. One example is the US manufacturer Tesla, which in recent weeks has increasingly pushed its cars onto the market on favorable terms.

The experts at Bernstein Research assume “that the price cycle is running out of steam”. In Europe, price reductions would only become noticeable in the second half of the year due to the high order backlog. “I don’t see any major price wars brewing, but the danger is increasing,” added Jürgen Pieper, automotive analyst at Metzler private bank.

More: Rising inflation is a challenge for manufacturers and suppliers

Lufthansa boss Carsten Spohr Good news for the top Lufthansa employee. He is due to sign a new five-year contract...

BtcTurk Donates More than 6 Million for Earthquake in Turkey

Bitcoin Has Golden Cross! What’s the Next Destination?