Frankfurt Johan Lundgren, head of British low-cost airline Easyjet, presented solid figures on Tuesday morning. In the staggered 2022 financial year (as of the end of September), the company is still posting a loss of 208 million pounds before taxes – the equivalent of around 241 million euros.

However, sales soared by almost 300 percent to £5.8 billion. Operating profit before interest and tax was in the black at £3m, down from around £1bn in the previous fiscal year. “We can respond to headwinds of any kind,” said Lundgren confidently. The demand for flights remains high.

In the financial year that has just started, the airline wants to reach the pre-crisis level with 94 million passengers. “I don’t see Easyjet as a target for a takeover,” said Lundgren, not ruling out takeovers by Easyjet. The airline has one of the strongest balance sheets in the industry.

But obviously not everyone shares this assessment. The British newspaper “The Times” recently reported that the International Airlines Group (IAG) is preparing an offer for Easyjet. This has not been commented on so far – neither by IAG nor Easyjet.

>> Also read: Withdrawal of Ryanair and Co. – What that means for the ticket prices of the low-cost airlines

Easyjet is mentioned again and again in connection with takeovers. Last year, management rejected a hostile takeover bid. It was not said who the bidder was. IAG and the Hungarian Wizz Air are said to have shown interest.

Undervalued companies and capital for takeovers

The renewed rumors about Easyjet show that now that Europe has slowly gotten the pandemic under control, airlines are showing increasing interest in acquisitions. IAG is also said to be interested in the Portuguese TAP Air Portugal.

“To a certain extent, there will be further consolidation in European aviation,” says Andreas Jahnke, Managing Director at the consulting firm Accenture.

>> Read about this: ITA takeover: why it’s for the Lufthansa could work out this time

The consolidation is primarily driven by two developments. For one, airlines are currently relatively undervalued. Because investors are still skeptical about the aviation industry. While business is bouncing back, with high inflation there is concern that people will spend less on travel. That could stall the current booking boom again. The uncertainty depresses the rating.

That was also evident on Tuesday. Despite the partly good figures, the Easyjet share fell by more than three percent in the morning. The airline is only worth around 3.3 billion euros on the stock exchange – a bargain for a provider with over 300 aircraft and low debt. 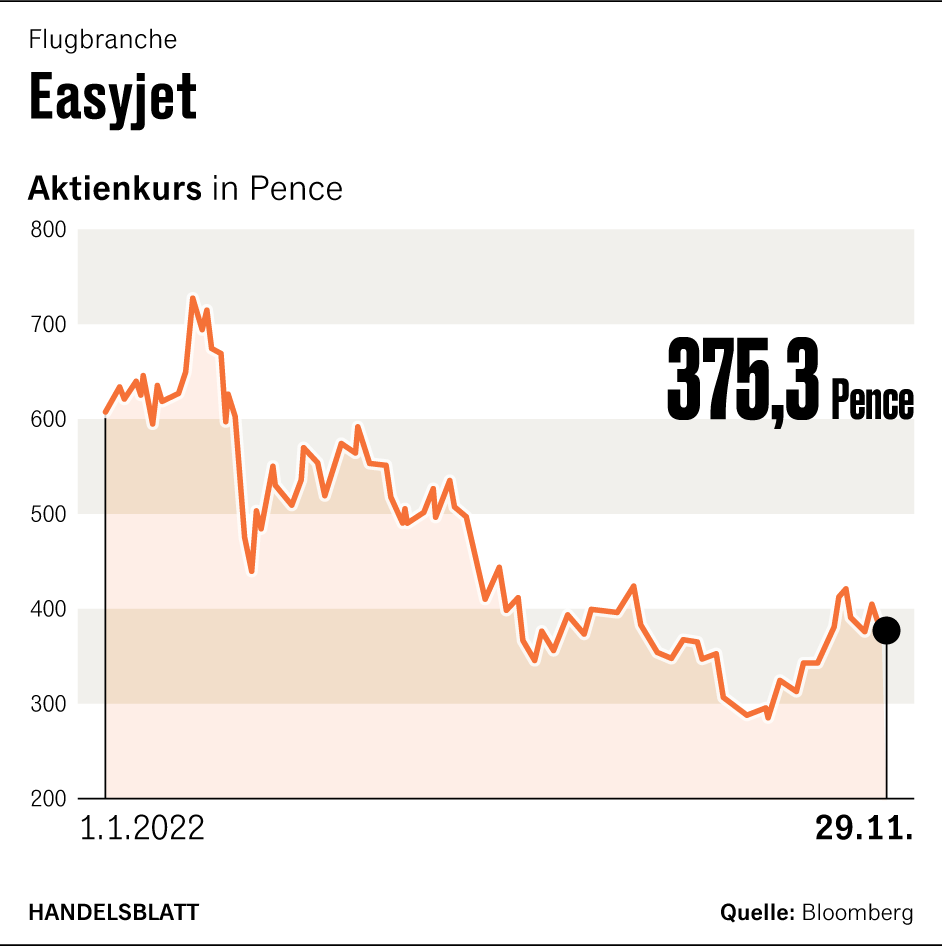 On the other hand, some large airlines have the necessary capital for takeovers. Because they came out of crisis mode surprisingly well and quickly. Providers such as Lufthansa or IAG are earning a lot right now, also because they can push through higher ticket prices. IAG, for example, estimated liquidity at the end of the third quarter at 13 billion euros.

In addition, smaller airlines in particular are under pressure. In the past, the government of Alitalia and its successor company ITA has repeatedly changed its attitude towards takeovers, so that there has never been a sale.

In the meantime, however, the financial pressure at ITA is so high that a solution has to be found. TAP, for example, was nationalized in the course of the corona crisis, and the Portuguese government wants to start the sales process next year.

Arch rivals are suddenly working together

But there are competition law challenges. The IAG management’s plan to take over the Spanish Air Europa initially failed in 2019 due to an objection from the EU antitrust authorities.

The IAG Group already includes two Spanish companies, Iberia and Vueling. In the meantime, the IAG subsidiary Iberia has actually acquired a 20 percent stake in Air Europa, but the EU Commission still has concerns.

On the other hand, there is growing pressure on the airline side to form larger units in order not to lose touch with global air traffic. Because there is a new trend: Instead of taking over each other, former arch-rivals suddenly come together in partnerships. The Lufthansa partner United Airlines and the Gulf airline Emirates recently offered a close cooperation.

There will be some further consolidation in European aviation. Andreas Jahnke, Managing Director at Accenture

“New partnerships of former rivals that are currently emerging are interesting,” said consultant Jahnke. The trend marks a turning point. For years, airlines in the US and Europe have been campaigning against the Persian Gulf state operators because of the strong government support they have received.

The problem from the point of view of the European companies: It is attractive for US providers to fly to Asia via Dubai, Abu Dhabi or Doha instead of via Europe. In this case, Lufthansa would lose access to important customers that its partner United has previously flown to Frankfurt, for example.

Emirates offered Lufthansa a similar partnership a few days ago. Lufthansa management also wants to take a look at the offer, but so far there has been little sign of enthusiasm in the Frankfurt headquarters. This is not surprising for consultant Jahnke, since “the advantages for a European airline are far less compelling”.

European aviation more fragmented than in the US

Expert Jahnke generally warns: “The level of concentration that we see in the USA will not be reached in Europe.”

Four major airlines have emerged in the USA over the years, and they largely share the market there: United Airlines, Delta Airlines, Continental Airlines and the low-cost airline Southwest.

In contrast, European aviation is much more fragmented. Although there have been some bankruptcies in recent years, there are over a hundred companies that offer regular commercial flights.

“In many countries, the domestic airlines are still regarded as a national symbol even after their privatization,” says Jahnke. In addition, there is concern that the economy will have to accept considerable disadvantages without its own national airline. “Experience shows that there are always providers who close the gaps immediately, at least as far as the attractive and popular routes are concerned.”

More: Turkish Airlines: Airline wants to take advantage of weakness of Lufthansa and others

Antony Blink The US Secretary of State will not travel to China for the time being. (Photo: AP) Washington A...